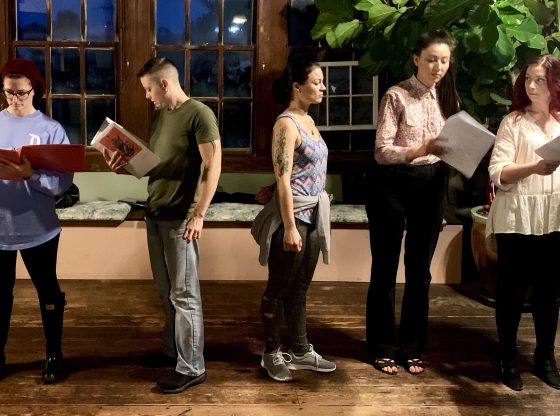 ORLANDO — Artists are often inspired by writers of an earlier generation, and the same is true for playwright and director Joseph Lark-Riley. He’s bringing his show Geography and Plays to the Orlando International Fringe Theatre Festival, and in creating the show, he found inspiration in the writings of Gertrude Stein.

In fact, Geography and Plays shares its name with Gertrude Stein’s 1922 published collection of portraits and plays.

“Stein, considered the mother of modernist literature, was an American expatriate author and art collector who lived her entire adult life in France, most notably in Paris, where she befriended and championed such cultural luminaries as Picasso, Matisse, Gris, Hemingway, and Fitzgerald,” Joseph notes. “Her own literary work reflected the true avant garde nature of her environment. The portraits and plays collected in Geography and Plays are counted amongst her more ‘difficult’ works, often eschewing conventional characters, narrative, grammar, and structure.”

But he also believes Fringe audiences are up for the challenge.

“Working with her plays is liberating,” he said. “It is like playing in a sandbox of sounds, rhythms, and ideas. They require engaged interpretation and so allow us to focus on what most resonates with our time and place and to bring our own ideas to the staging.”

As he noted, his script draws primarily from three pieces in Stein’s collection: ‘Susie Asado,’ a portrait of a flamenco dancer where the sounds of words are often more important than their meanings; “Miss Furr and Miss Skeene,” a portrait of two women whom Stein and Toklas knew in Paris, and a piece notable as possibly being the first literary moment where the term “gay” was used to mean homosexual; and ‘White Wines,’ an abstract modernist thesis about habitual living and the potential to break free from routine.

Geography and Plays was adapted and directed by Joseph, who lives in Rockledge, Florida, and it’s being performed by Alexandria Litras, Cathy Moubray, Kari Ryan, Amanda Smith, and Marcia Nicole Smith. The original choreography is by Amanda Cheyenne Manis, and costume styling by Tammy Jo Fashion.

Freeline Media contacted Joseph to find out more about the show.

What is Geography and Plays All About?

Freeline Media: How did you come to develop a play based around the writings of Gertrude Stein?

Joseph Lark-Riley: I was introduced to the concept of non-narrative theater when I saw a production of Gertrude Stein and Virgil Thompson’s opera ‘Four Saints in Three Acts’ as a teenager. It came to me at a perfect time, as I had already been involved in community theater throughout my childhood and was strongly considering a life in theater, but was also experiencing a tedium in the types of performance I was part of in the small town where I grew up. The opera had no discernible plot, nothing really happened but that singers would enter and sing. But the confidently playful designs, the intentionality of the performances, the soaring score, all contributed to a transcending experience of theater. This sowed the seeds in me for much of my independent work, the potential for theater to explore the richness and challenges of abstraction. Last summer I decided I wanted to create a new abstract theater piece, and quickly landed on the idea of working with Stein as the source text. It was a return to the source – intimidating but felt right.

FM: It sounds like you found something inherently theatrical about her writings.

Joseph: I knew that Stein had written plays. The single-volume collection of her work that has been part of my library since right after seeing ‘Four Saints in Three Acts’ includes two of her earliest plays, along with a section of her published lecture on theater in which she sheds some light on her approach to playwriting. In it, she writes of how, since everyone is constantly experiencing all manner of stories moment to moment throughout their lives, she wanted to create something different for the stage. These plays fall into the more “difficult” of Stein’s oeuvre. In them, she seems to be prodding the fragile inherent weaknesses and inadequacies of language, attempting to communicate the incommunicable. In the current project I am working with texts collected in Stein’s ‘Geography and Plays’ — we’re borrowing the title for our show. This is a collection of early portraits – word paintings of people she knew – and plays. While the portraits are attempts to capture the essence of individuals, the plays are doing the same with the relations between people.

FM: You described working with her writings as “like playing in a sandbox of sounds, rhythms, and ideas.” Elaborate on that.

Joseph: The text of these portraits and plays can seem like nonsense. Words are repeated until all explicit meaning is removed. Lines are repeated with minor variations. There are often no discernible characters named, and when they are at least hinted at, it isn’t clear what text they are to speak. Images are conjured and immediately subverted. Often it feels that sections of text are written not to convey semantic meaning but to create a sense of tone through sounds. It is literary modernism in full-force and can be challenging and off-putting, but as soon as one lets go of expectations and experiences the text on its own terms, it can be playful, beautiful, inspiring and liberating. It demands interpretation when considered for performance.

FM: You’re dealing with writings from the 1920s. Are you also using them to comment on our current times?

Joseph: Some of the plays we are working with were written over one-hundred years ago, yet the ideas within them continue to challenge and inspire. They are not didactic, they almost never explicitly tell the audience anything outright. Instead, they embody their meaning – they’re about nothing more than what they are. In this way, they are about shifting perspectives, playful reconfigurations of assumed systems of being and thinking. They are about change and curiosity and play. They are about recognizing that human relations to one another and the web of society that is spun from these relations is based on habits, and that habits can be broken. I find comfort today, a time rife with anxiety and tension, being reminded of these things.

FM: Tell us about your own background in community theatre.

Joseph: I was introduced to theater in Brevard County. There was a Children’s Community Theater group here that I became involved with when I was young. I went on to study theater and design in New Orleans where I began my career as a scenic designer. In Chicago I experimented with different performance practices at Columbia College Chicago’s Interdisciplinary Art graduate program and new play-making as a designer and producer in the Chicago storefront theater circuit. In New York, I spent two years designing for off-off-Broadway companies. My wife and I decided to return to Brevard County where we would generate and present new theater. As miR theater we developed two original scripts with visiting playwrights, fully produced and toured one of these scripts and another play by a local playwright, and hosted a series of community-developed theater events. Currently I am working as the resident scenic designer at The Historic Cocoa Village Playhouse in Brevard, as well as designing productions at local public high schools.

Geography and Plays is being presented at The Orlando International Theatre Festival in the Brown Venue on the following dates: