Heartbeats Offers a Heartfelt Look into the Challenges of Midlife 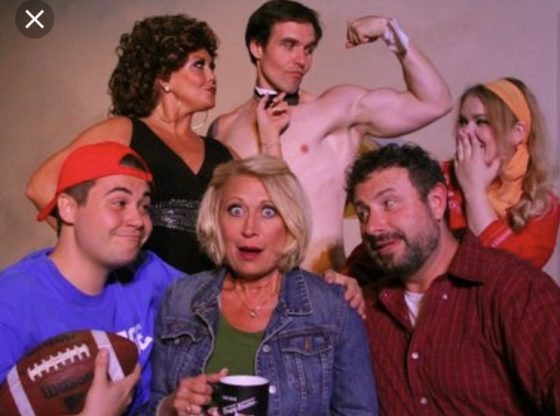 WINTER PARK — The musical Heartbeats opens in a cute way, and I use the word cute for a specific reason. It’s a Monday morning, and Annie gets up that day to the realization that she’s about to hit a milestone: the wife and mother of two kids will turn 40 in a few days. When the mail arrives that morning, she has several cute birthday cards from family, friends and coworkers — there I go with the word cute again.

And the opening songs “I’m Fine” and “Monday’s Mail” are, well, cute as well. As she nears the end of her 30s, Annie seems to have it all: a nice house, two adult kids out on their own, and a marriage to a man she fell deeply in love with decades ago. The musical by songwriter Amanda McBroom has the feel of a sweet, funny, light look at a happy person enjoying life’s simple pleasures.

And the show is anything but.

As pleasant as the opening is, the light and airy tone masks a considerably more complex and emotional look at a time in life that anyone over the age of 40 can instantly relate to: the point where you recognize that your youth is gone, and, at middle age, you’ve fallen into a …. routine.

Maybe it’s a nice one that suits all your needs. Annie seems to think so, at first. But as Annie starts to question whether there’s a lot more problems in her life than she was initially ready to admit, the play’s mix of sweet humor and inner turmoil really hits home. In an excellent season at The Winter Park Playhouse that’s included some outstanding productions like Gigolo and What A Glorious Feeling, Heartbeats may be the best one yet.

What’s The Musical HeartBeats All About?

Amanda McBroom, perhaps best known for composing Bette Midler’s hit song “The Rose,” wrote the book, lyrics and music for Heartbeats, which debuted in 1989 in Los Angeles and went on to performances at more than 15 regional theater productions around the country. She has a deceptively smart way of capturing the aspects of turning 40 that sneak up on us, like the moment when Annie’s daughter calls to announce that she’s fighting with her boyfriend and wants to move back home, just as Annie has finally gotten used to having the house all to herself.

Because for the most part, Annie seems to have what everyone wants at 40: a stable life in a nice home with a sweet husband.

But it’s the little things that start to nag at her … like the fact that her husband Steve comes home, eats, and zooms for the TV to watch football. They don’t talk that much anymore, he never asks how her day was … but after 20 years of marriage, don’t all couples take that stuff for granted and begin to run out of things to say?

Except that for Annie, having both her birthday and wedding anniversary on the same day leaves her wondering where she is in life. She begin reflecting back on her teen years when she and Steve first met, which is some of the show’s funniest moments. But the excitement of those love at first sight years only makes her current situation feel that much worse, as Annie begins to wonder where all that magic went.

And on the night before her birthday, it gets considerably more complicated when two of Annie’s best friends take her out for a drink … at a nightclub featuring handsome, beefcake young men who don’t wear shirts. Oops. While there, Annie rather hilariously confronts her own desires to maybe, just maybe, head off in a new direction.

What Does The Winter Park Playhouse Bring to the Show?

With their usual polish and exceptional acting, the Playhouse makes a very smooth transition from the nice little opening to the far more emotionally charged, and poignant, second half, and it would be tough to imagine better casting. Heather Alexander, the Playhouse’s artistic director, is terrific as Annie, managing to be funny, sad and quite touching as she begins her journey of self-discovery. Her performance makes you hope she gets on stage more often in their next season.

And Shawn Kilgore is equally good as Steve, who is a nice guy, worries about his factory job where there are layoffs happening … and seems almost completely oblivious to his wife’s inner struggles. In fact, coming home, having a nice meal, watching some great football and not having to engage in all those touchy-feely conversations seems to be exactly what he wants at 40. Kilgore gives Steve the ideal deer-in-the-headlights expression once Annie’s breakdown begins.

The other cast members — Clay Cartland, Nick Drivas, Hannah Laird and Rebecca Jo Lightfoot — take on multiple roles, and tend to stand out in at least one of them. For Drivas, it’s Annie and Steve’s seemingly disaster-prone son in college, and for Laird, it’s Annie as a lovestruck teen. Lightfoot is a hoot as Annie’s sassy, and very different, high school pal, while Cartland shines hilariously as a Chippendales-type waiter who has an eye for older women.

Funny stuff indeed, but the show also beautifully captures why we often start to reevaluate our lives at a certain point, even when nothing obvious seems “wrong” with it.

How Do You Get Tickets?

For more tickets and information call the box office at 407-645-0145 or log on to Winter Park Playhouse online.