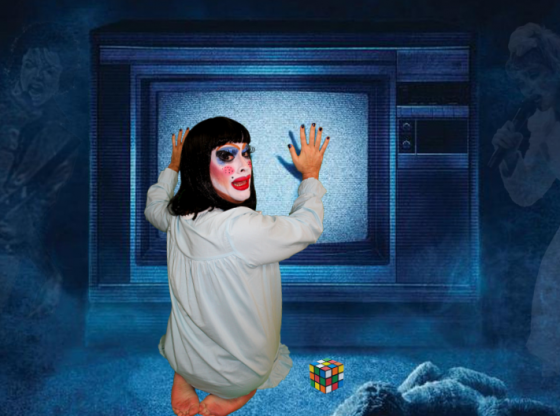 ORLANDO – The Orlando International Fringe Theatre Festival will be hosting a diverse number of shows this year at the Lowndes Shakespeare Center, including some familiar faces making a return visit. And that includes Madame PeeVira.

Also known as the Fringy Mime Queen, Madame PeeVira is back with an all new Fringe show, taking us down a nostalgic and sometimes creepy look at the 1980s. Anybody remember that decade?

For the uninitiated, PeeVira invites guests to come outside and check out her spooky SCAREavan, where you get treated to a 30 minute sing-along satire.

So What Is This Scareavan Show All About?

This year, PeeVira plays a BIG “80’s Baby” that’s been left alone, and definitely needs some babysitters. Hungry, dirty, this is one baby that needs to go nite-nite. But there’s a catch: the only way to get her to sleep is to sing to her.

And guess what: that’s where the audience comes in. And as Madame PeeVira noted, “Whatever you do, do not let her watch TV. There are evil spirits living in there.” Yikes!

Each show seats 6 people at a time, offering them “an intimate and fun experience,” PeeVira noted. Once on board, the guests can select their own show to decide which collection of 80’s hits they’ll sing along to.

Madame PeeVira is the creation of Aj Prats, and “80’s Baby” is the third installment to the sold-out hit “SCAREavan” shows, which originally premiered at the Fort Lauderdale Fringe Festival in April 2017 and then traveled to Orlando Fringe for some sold out shows.

What Does Aj have To Say About This Year’s Show?

Freeline Media reached out to Aj to find out why this show is one that any proud drag queen simply can’t miss.

Freeline Media: You have a truly unique Fringe show, in that you operate out of … a van. How have you drawn in audiences at past Fringe Festivals?

Aj Prats: Word of mouth has been my biggest draw. The people that have “taken a ride on PeeVira” have been left satisfied.

FM: Is your show better at night — meaning after dark, and why?

AJ: Day or night, the SCAREavan is always a good time. My show is only better when I have a receptive audience that is ready to sing along and have fun.

A.J.: There were several scary things that were going on in the 80’s. There was the up rise of crack cocaine, the AIDS epidemic, Poltergeist, and Steven Tyler’s lips. I address these (and a few other) topics lightly in this year’s show.

The inspiration for this year’s theme came from the fact that I am turning 40, and that scares me a little, but I wanted to reminisce on my childhood. I also wanted to somewhat pay tribute to the most iconic era of Horror cinema.

The true scare factor will come from watching a drag queen pretend to be an oversized baby in tight quarters. Of course, there’s always “Thriller”.

FM: Your show originally premiered in Fort Lauderdale. How are those South Florida audiences compared to the ones in Orlando?

AJ: In comparison to Fort Lauderdale, Orlando Fringe audiences are way better! They are more diverse and open to the arts.

FM:. When not scaring up Fringe audiences, what keeps Madame PeeVira busy?

AJ: When I’m not doing Fringe, I am hosting a monthly drag movie bingo night at Vault 5421, inside Gods & Monsters on I-Drive. On May 3rd we will be celebrating our one year anniversary with a tribute to the Alien franchise.

PeeVira’s SCAREavan SingAlong: 80’s Baby is playing May 16-19 and 23-26, with show times at 7, 8, 10 and 11 p.m. This show has all its performances inside “PeeVira’s SCAREavan”. Pick up location will be in front of Lowndes Shakespeare Center.

Tickets to PeeVira’s SCAREavan SingAlong: 80’s Baby are $12 each. You also need to purchase a $10 Fringe button to attend the festival. For tickets visit Fringe Tickets.

To learn more about the PeeVira shows, visit The Fringy Mime Queen.