Hammered Dog, a Dark Glimpse into a Deadly Relationship, Coming to Orlando Fringe 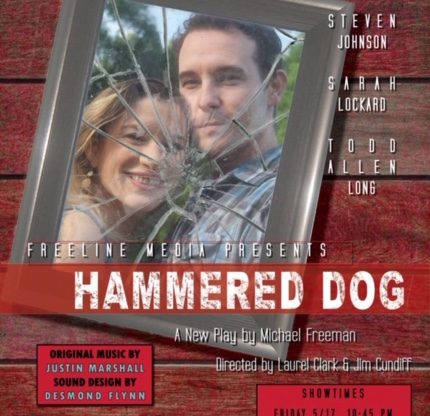 ORLANDO — Most of us have been exactly where Sandra is in the opening of the play Hammered Dog: in a popular nightclub, desperately hoping to meet someone, to find a person who’s both attractive and charming, then noticing a man who’s so handsome that she can’t resist approaching him …

Until he turns around too quickly and bumps into her, causing poor Sandra to accidentally spill her drink on his spiffy new shirt. Totally humiliated, Sandra rushes outside, and overcome by feeling ashamed and mortified, she smashes her glass, picks up a sharp piece, and prepares to slice open her wrist ….

Only, she never gets the chance to do that.

Hammered Dog, a dark (and darkly comic) look at a relationship that rapidly goes in all the wrong directions, is having its world premiere at the Orlando International Fringe Theater Festival in May.

Written by playwright Michael W. Freeman, Hammered Dog is set in Orlando and opens in that nightclub. Within seconds, Sandra is fully prepared to slice her wrists and end months of being brought down by loneliness, a sense of rejection, and a deeply troubled past.

And what happens next puts Sandra’s life on a much darker path than she ever could have imagined.

Directed by veteran theater artists Laurel Clark and Jim Cundiff, the cast includes Sarah Lockard as the shy, withdraw young Sandra, Steven Johnson as the handsome young man she meets at the nightclub, and Todd Allen Long as her co-worker and friend William.

What Inspired This Play?

Freeman said the inspiration for Hammered Dog came from that opening scene, which kept circling around in his head, without any clear direction of what would happen next after Sandra breaks the glass.

“Then a creative spark hit me, and everything came together pretty quickly after that,” he said. “I think it’s a play that’s going to resonate in the Me Too era. It has a lot to say about abusive relationships and where that can lead you.”

Sandra becomes the protagonist who goes back to her apartment, but finds she’s now undergoing an experience that initially seems exciting and too good to be true ….. and then goes from tense, to fearful, to downright harrowing. At the same time, the play offers a considerable amount of humor as Sandra renews her friendship with William, an older gay man from her office who acts as a mentor to her.

This will be the fourth play that Freeline Productions has produced at Orlando Fringe, and the fourth time that Freeman and Clark have collaborated.

“It seems we all have known a Ted at some point in our lives,” Clark said. “Only someone as naïve as Sandy wouldn’t recognize him for the psycho that he is, and only someone who was abused in the past would stick around him for long. You might say this is a twisted tale about female empowerment — or a story of self-esteem erosion that leaves a person bare to the bone. But when your heroine veers into villain territory, it’s how it makes us feel that is the most telling.”

Meet The Cast and Crew

Sarah Lockard is “very excited to be working with this amazing cast and crew,” she notes. Her previous Fringe credits have included Aquadance, Callbacks, Connected, Cannibal! the Musical, and Ironhead and the Quest for the Ring of the Dark Evil Lord of Evil Darkness.

She performs regularly at Sleuth’s Mystery Dinner Shows and recently appeared in The Birds at The Garden Theatre.

Steve Johnson first worked with Michael, Laurel, and Jim when he performed in Murder Sleep in 2016. Steven performs in various venues around town, usually as Generic White Guy #2. He has done numerous other Fringe shows, and he’s a regular performer at the Parliament House and its Footlight Theater, and at Universal Studios Orlando as both an actor and dancer.

Todd Allen Long is the director of Box Office and Administration at The Winter Park Playhouse, and he’s a regular singer and actor in their productions as well, having performed in their most recent show, What A Glorious Feeling! Todd’s preview Fringe credits include Romance/Romance (2006), Here Be Dragons (2008), Corpus Christi (2009) and And Baby Makes Four (2014).

His local theatre performances have included The Musical of Musical: The Musical at Jester Theater, Mortimer in The Fantasticks at The Winter Park Playhouse, Peter Patrone in The Heidi Chronicles at Mad Cow Theatre and Professor Callahan in Legally Blonde at Theatreworks Florida.

Laurel Clark has been a professional theatrical director and performer since 1986. Theatrical experience with original shows, improvisation and script development have led to a successful career in directing and writing. She is in her 24th year as the Executive Show Director for Sleuths Mystery Dinner Shows, which has been an industry standard since opening in 1990 and is proud to be the largest and longest running full time repertory mystery show in the U.S.

Laurel has participated as a director, assistant director and actor since Orlando Fringe began in 1991, and The Hammered Dog will be her 20th offering in this year’s Festival. She has been thrilled to have had 7 past shows win awards or the Patrons Pick for their Venue as well.

Since returning to the stage a decade ago, Jim Cundiff has enjoyed performing at Orlando Shakespeare Theatre, Mad Cow Theatre, Breakthrough Theatre of Winter Park and with freelance groups like Dark Side of Saturn. Jim shoulders the responsibilities of producer and director regularly, including projects for Playwrights Round Table and Breakthrough Theater. As a fledgling producer, Jim was thrilled with the success of his show, the Ned Wilkinson musical Fosgate Ferret Loan Officer, which was 2012’s Brown Venue Patron’s Pick at Orlando Fringe.

Hammered Dog is being presented in the Red Venue at Orlando Fringe on the following dates:

Tickets are $11 (Fringe buttons are needed to get into shows) and are now on sale at Orlando Fringe.