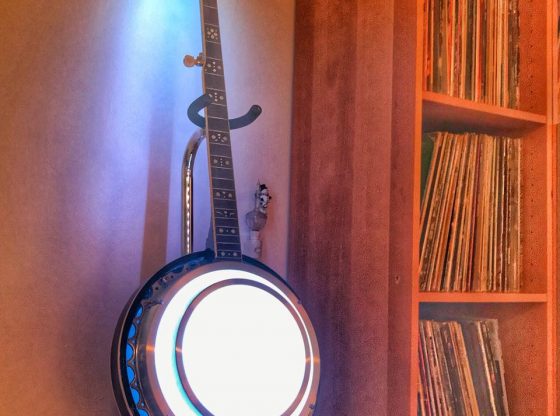 ORLANDO — The term Dark Lighting might just conjure up images in some people’s minds of something within the realm of fantasy — a science fiction movie, perhaps, or a new comic book character.

In reality, Dark Lightning is a business , and it’s better categorized as furniture — although calling it art makes a lot of sense, too.

This Orlando-based business was the brainchild of Justin Wrasman, who has a creative mind and a passion for repurposing things, particularly older, outdated items. Think of it as going through your attic and finding things that no longer have much value or practical use — and discovering a new and unique use for each one.

That’s what Justin did when he created Dark Lightning through RJWrasman Design. And in this case, everything he’s created, regardless of what it started out as, gets transformed into a lamp.

What Are Some New Ways to Make Lamps?

“Repurposing things I’ve found along the streets of Central Florida,” is the way Justin described the process on the Dark Lighting Facebook page. “Dark Lighting started from my desire to keep things I find interesting out of landfills.”

It’s a distinctive and idiosyncratic approach to recycling, a terrific way to take “Going Green” to new heights.

Because what Justin now designs in his studio is original, hand made pieces of reclaimed furniture and lighting — the ultimate in stylish, fashionable and ultramodern lamps.

It’s all there, each custom, one-of-a-kind piece: a fan used to make a Radiant Copper Lamp, a Vornado fan made into a lamp, an Argus Projector lamp.

As Justin noted on his online marketplace site, “I love finding unique pieces that may have been forgotten and turning them into something of use. Something that could be used for another 100 years. I’m inspired by mid-century, industrial, steampunk, and atomic-age esthetics.”

And now, armed with a fascinating collection of newly designed lamps, Justin is on his way to Maker Faire Orlando.

What Is the Maker Faire?

Anyone interested in Justin’s unique brand of lamps can check them out at the upcoming Maker Faire Orlando, which will be held on Nov. 10-11 at the Central Florida Fairgrounds.

This weekend event is going to feature exhibits by creative people who love sharing what they can do, and that’s going to be including artists, engineers, and crafters. Each one will have an opportunity at this event to display their hobbies, experiments, and ongoing projects.

Justin, who also works for the Orlando Magic basketball team, will be one of the creative designers with an exhibition booth at Maker Faire Orlando, opening up his work to the vast audience attending this event.

With that in mind, Freeline Media decided to reach out to Justin to learn more about his work.

What Are The Origins of Dark Lighting?

Freeline Media: You make a mean (and creative) lamp. How did you first get interested in designing lamps?

Justin Wrasman: My friend had this mid-century Waring blender. It was all chrome and had a beehive design. I just loved the look of it.

Unfortunately, it kept shocking him and he told me he was probably going to throw it away. I told him that if he did, I would take it. I didn’t know what I was going to do with it, but knew I couldn’t bare the thought of it ending up in a landfill.

I contemplated making a fishbowl out of it, as an ironic nod to its previous use — although, I’m not a big fish person, so I landed on making a lamp. It was a relatively easy venture and the response from posting it on social media was very positive.

I’ve always loved the idea of repurposing things. I’ve also always loved old “crap” for lack of a better term. This ties together my need for a creative release, my desire to leave the world a prettier place and my love of old crap. The fact that other people like it is the best feeling.

FM: What’s the most unique lamp you’ve ever created?

JS: In my opinion, the banjo was probably the most unique “lamp” I’ve made. It had leds inlaid in the back of the neck and head. It was a commissioned piece and it came with a remote in which you could choose specific colors, gradients of colors and strobing effects.

I think the integrated dimmer rotary phones are my personal favorite, though.

FM: What’s the market like for more stylish and exotic lamps? Do people give you requests for the kind of design they want?

The market is there. It’s obviously not for everyone but I’ve seen them used in different design esthetics.

The pieces I select usually have a nostalgic draw. The people who purchase them either have a connection to them within their own history, or in the case of typewriters and sewing machines, a connection in their professional life.

To date, I’ve only done one commissioned piece which was the banjo. I have had pieces donated to me. People have cool antiques that seem to just collect dust in their house. I started accepting these pieces, making lamps and then they have the option to purchase them at a 10% discount or receive 10% of the profits.

FM: Tell us what you’ll be doing for Maker Faire Orlando?

JW:I had high hopes of doing an immersive exhibit this year for Maker Faire. A relaxing room setting that invited guests in to experience the integrated lamps.

A lot of people like my work but have a hard time imagining them in their space, so I was hoping to create a space that shows how they could be used in everyday design.

As the date pushes closer and my personal life puts Dark Lighting on the back burner, I’m thinking I may have to settle for one of my more traditional displays.

Maker Faire Orlando will be held on Saturday and Sunday, Nov. 10-11 at the Central Florida Fairgrounds at 4603 W. Colonial Drive in downtown Orlando. To order tickets, visit Eventbrite.

To learn more about Dark Lighting and the work of Justin Wrasman, visit Justin’s online marketplace at Etsy.