Some Thoughts on the Horrific Massacre at Pulse

Home /Freelining, Opinion/Some Thoughts on the Horrific Massacre at Pulse 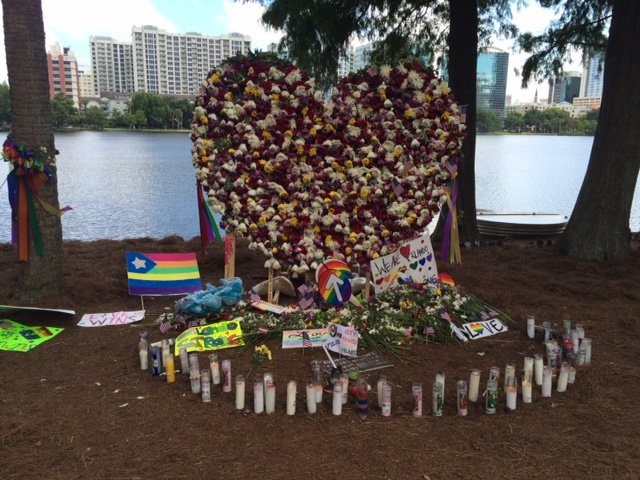 ORLANDO — After years of watching television coverage of terrorist attacks in other cities, from 9-11 to San Bernardino in December 2015, I always had a nervous feeling in the pit of my stomach that Orlando would eventually become a very tempting target for something similar.

I hate to admit this, but for me, the question wasn’t whether it might happen — but when. After all, Orlando is the No. 1 tourism capital of the nation, a place where millions of families bring their children every year, from all over the world. In terms of the power of a symbolic attack on American values, I always worried that terrorists would eventually conclude that they could strike a deep psychological blow by bringing their horrific massacres here.

Early in the morning, around 2 o’clock on Sunday, it finally happened. The death toll was shocking — as many as 50 people confirmed dead and more than 50 wounded.

What I hadn’t expected was the location. On Sunday morning, when I got up and turned on my cell phone, I got the first media text alert — mass shooting at The Pulse. I blinked, and looked again to be sure I had read that correctly.

The Pulse? I said to myself. The gay bar?

I had read it correctly.

And frankly, I was startled.

I spent the morning watching the depressing coverage of the attack, and learned just like everyone else that Omar Mateen, a 29-year-old American-born Muslim, and gone into the gay nightclub armed with an AR-15 semi-automatic rifle and began shooting. I learned he had held many of the club’s patrons hostage for hours until Orlando police used explosives and an armored vehicle to punch a hole in a wall, and then kill Mateen.

And yes, it was clear as the day went on, that Mateen had targeted one specific group, gay people — possibly motivated, his father would tell one news agency, by his anger over seeing two men kissing in the Miami area.
In the past, I’ve seen horrifying instances of attacks on a single group — the Charleston church shooting massacre at Emanuel African Methodist Episcopal Church in June 2015, targeting the city’s black community, and sadly too many instances to recall here in Florida of attacks on Synagogues.

But if there’s one thing I suppose I had become complacent about, it’s the sense of what it feels like to be gay in Orlando. I honestly would never have expected the first terrorist massacre to specifically target the gay community.

I moved to Orlando in April 2002 with my longtime partner Mel. We were relocating from Massachusetts, a state that seemed leaps and bounds ahead of many other parts of the country in political attitudes toward gay rights. There was no small irony in the fact that shortly after we moved, the Massachusetts Supreme Court legalized gay marriage — that we had just left a state where we could have gotten married, to one where voters would eventually approve a constitutional amendment to ban gay marriage altogether.

But at the same time, despite my nervousness about giving up what seemed like the much safer political environment of Massachusetts, in the 14 years I’ve been in Orlando, it’s felt like anything but a hostile atmosphere.
Since 2002, I’ve watched a unique transformation here in the city. I was there when Orlando’s city council approved a gay rights ordinance in 2002 — and no one made much of a fuss about it. I watched the council approve a Domestic Partner Registry in 2012, and then vote to endorse gay marriage in 2014 — again, with only very minimal opposition.

I watched the mayor, Buddy Dyer, preside over the city’s first gay marriage ceremonies in front of City Hall in January 2015.

I can remember, not long after we first moved to Orlando, Mel and I going to a local car dealership to buy a car, and as we sat down to do the paperwork on the financing, being asked what our relationship was. I froze — if I said a gay couple, would we get denied? But Mel didn’t hesitate — he just said “domestic partners,” and the dealer smiled and said, “I understand. We get that a lot.”

Over the years, I’ve watched the city’s gay community grow by leaps and bounds as Orlando’s friendly attitude toward gays, combined with Florida’s appeal as a great playground, drew them in. I watched the annual Gay Days celebrations happen every June without incident.

It’s not that there were never any reminders that some people hated gays. I remember one night when I took my family to a theater production at The Parliament House, a gay resort located in the city. As we were walking back to the parking lot, some teenagers drove by and starting screaming “Faggot!” at us. I shrugged it off, but my niece Brooke, who is straight, was mortified, and couldn’t stop talking about how idiotic male teens can be.
Incidents like that, though, were very few and far between.

So I was shocked beyond words to learn that someone would drive two hours just to walk into a gay nightclub and start shooting and killing people, with their sexual orientation being the main target.

Maybe I shouldn’t have; I’ve watched those atrocious videos of ISIS members tossing suspected gay people in Iraq off buildings to their deaths, and knew Islamic terrorists made a point of their desire to slaughter gay people.

I just never thought it would come home to us.

Father of a teenage boy killed in a tragic accident roots for the movie made in his son’s honor.
Did the novel “Bloody Rabbit” Succeed in Predicting the Trump Era?