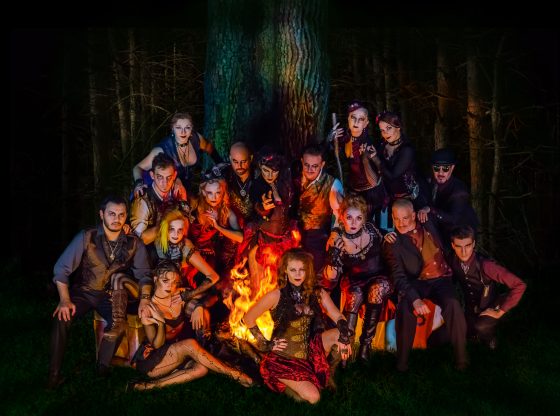 ORLANDO — About midway through “Phantasmagoria IX – Homecoming,” I noticed that most of the ghost stories being recreated by the mysterious and enigmatic troupe of actors, dancers, and acrobats dated back to the 1800s.

An amazingly good century for tales of ghosts and other terrors?

“Phantasmagoria” is now celebrating its ninth year of making annual visits to the Lowndes Shakespeare Center to recreate horror stories on stage. And while “Homecoming” revives tales from two of horror literature’s best known writers, Edgar Allan Poe and Ambrose Bierce (dealing, in a suitably chilling manner, with a tomb where lies a man’s late wife and a panther stalking the countryside), some of the other works are likely to be less well-known to modern audiences outside of classic lit students and professors.

This year, writer/director John DiDonna seems particularly pleased with the ghost stories of Thomas Hood, an English poet and author.

Along the way, Phantasmagoria provides another new twist: a character named Zarus, who curiously shows up at their camp in the woods, his motives for arriving there never quite clear …. until the end.

Zarus does join in on the presentation of those ghost stories, though, if a bit reluctantly at first.

And sure enough, right in time for the Halloween season, Phantasmagoria reminds us of something we’ve known for … well, centuries: we all love a good spine-tingling ghost story.

Why Are Ghost Stories so Popular?

Ghost stories — eerie tales of spirits who return from the dead to haunt the places they left behind, have appealed to audiences since ancient times. In fact, ghost stories have been a part of the folklore of different cultures all around the world.

Often times, ghost stories split into two categories: the ghostly rise from the dead of prominent historical figures (Anne Boleyn, Benjamin Franklin and Abraham Lincoln among them), or tales of buildings believed to be haunted, including hotels, prisons, and courthouses. Places that are haunted, it’s been said, are associated with something grisly or painful in the ghost’s past, often the place where they died.

And those are the places known for strange noises, lights flicking on and off, doors shutting and opening on their own, foul odors, bells that ring spontaneously and sometimes even the appearance of a figure standing in the darkness.

It’s been theorized that people love stories of ghosts and specters because it allows them to avoid the painful reality of death: we may continue to exist after dying.

But whatever sociologists consider to be the truth about the stunning enduring appeal of ghost stories, it seems to me that Phantasmagoria adequately answers that question in a far more simple and effective manner: we all love a cold, dank hand touching the back of our necks and scaring the bejesus out of us — in a safe setting.

What Happens in the Series This Year?

If you’re new to this series, Phantasmagoria (created by DiDonna in 2010) follows a troupe of circus-like performers who have ingenious ways of entertaining us, from acrobatics to dancing to fire acrobatics — always the fine trappings in-between their true raison d’etre, which is recreating for the audience classic literary horror, some of them humorous, some posed as psychological case studies, and more than a few that are menacing and downright scary.

We’re not quite sure if the performers themselves are otherworldly specters, which has been hinted at more than a few times in past years.

“Homecoming” opens with the troupe in a dark forest, ready to explore more literary horrors, when Zarus suddenly stumbles onto their camp. Both puzzling and mystifying, Zarus is reluctant to reveal much about himself (at first), and he’s initially hostile to their storytelling and why they’re doing it.

Of course, that doesn’t stop the troupe from performing, and like a vampire prowling around in the dark, more than a few of this year’s tales have a real bite.

How Do They Handle Poe and Bierce?

That includes their retelling of Poe’s classic “Ligeia,” which describes the deep despair that falls on the narrator after his beautiful wife Ligeia, becomes ill. After her death, our narrator marries the Lady Rowena, who also falls ill and dies. The narrator, completely distraught, stays with her body overnight in her tomb — and watches as Rowena comes back from the dead. Only now she’s been transformed into Ligeia.

A dark and brooding tale, it can be seen as either a ghost story about possession, or possibly a long hallucination (in Poe’s story, the narrator admits to being an opium addict, and early on he describes Ligeia’s beauty as “the radiance of an opium-dream.”) Either way, the cast effectively recreates the terror our narrator experiences watching Rowena’s horrific transformation.

Equally effective — and radically different — is Bierce’s psychological thriller “The Eyes Of The Panther,” about Jenner, a rural attorney who can’t understand why his true love Irene Marlowe refuses his marriage proposal. Finally, she confesses that she’s insane.

She recalls her parents living in a rural cabin, and her mother getting an overwhelming intuition that something horrible would happen to her husband if he left to go hunting.

Later that night a panther can be seen looking in the cabin window, terrifying the mother so badly that she clutches her infant tightly to her chest. When her husband returns, he finds his wife traumatized and the baby accidentally smothered to death in her arms. When Irene is born months later, her mother dies in childbirth.

Now Irene says she feels like she’s been possessed.

Jenner refuses to believe that makes her insane. But several nights later, Jenner looks out the window and swears he sees a panther ….

Either a tale of psychological deterioration or a twist on werewolf sagas, “The Eyes Of The Panther” is similarly haunting, and the use in Homecoming of an animated background showing those panther-like eyes glancing in the window only adds to the story’s menacing appeal.

There are other fine segments, including “The Haunted House,” based on a poem by Hood, about a wanderer who comes upon a seemingly abandoned home and decides to talk shelter in there … only to discover this house sure ain’t no The Haunted Mansion at Disney.

With some newcomers in the cast, DiDonna’s “Phantasmagoria” demonstrates that he’s come up with an effective formula for keeping audiences suitably chilled to the bone, the ideal material for Halloween. The entire cast is quite good, particularly DiDonna as their leader Byron, Daniel Cooksley as Zarus, and Brett Belcher as the performer Ulrich.

The fact that Phantasmagoria is able to bring on new performers and still maintain its demonstrative creepy ambiance reinforces that notion.

Since last weekend’s performances at the Lowndes Shakespeare Center, this production is moving on to:

You can also join Phantasmagoria at a Victorian home for its first ever walk through ‘Haunted’ experience. The troupe will gather for the “Ghost of the Higgins House” on Oct. 30-31 with multiple showings starting on the half hour, at the Higgins House Victorian Bed and Breakfast, 420 S Oak Ave, Sanford.

Then in December, a “Phantasmagoria Victorian Christmas Celebration” will bring them back to Higgins House to celebrate the holidays early on Dec. 1. Phantasmagoria arrives to revel in holiday splendor with music, Holiday Ghost Stories, magic and more, as guests also enjoy a Victorian Buffet of desserts and delights along with Victorian drinks to warm a chilled heart.

This event is on Dec. 1-2, with two showings during the evening.

Then celebrate the 2018 Holiday Season as Phantasmagoria returns with its unique adaptation of Charles Dickens’ classic holiday tale “A Christmas Carol, A Ghost Story of Christmas,” in a production featuring dance, puppetry, projections, music and storytelling. This show will be performed at: