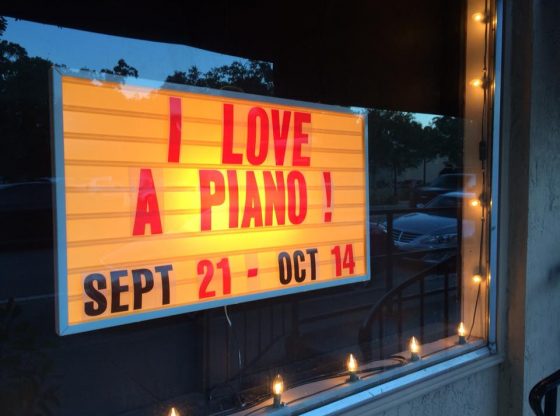 WINTER PARK — The musical show “I Love A Piano” is built around the song by the great composer Irving Berlin, which he wrote in 1915. The song got its introduction in a Broadway musical revue called “Stop! Look! Listen!,” and legend has it the show was a big hit because it consisted of an enormous keyboard that ran completely across the stage.

The musical tribute “I Love A Piano,” which opened on Friday at The Winter Park Playhouse, has a grand old time reviving the classic songs written by Berlin, but it does so in an ingeniously creative way. And with a cast led by the Playhouse’s artistic director, Roy Alan, the show combines humor, dance and some truly soaring moments as the cast revives more than 60 of Berlin’s greatest works.

What Is This Musical All About?

The musical conceived by Ray Roderick and Michael Berkeley opens in the present day in a music shop, where the owner is frustrated that he just bought an old piano and one of the keys is off kilter. As he fumes, the show takes us back, back, back ….. to Alexander’s Music Shop circa 1910, where this brand new piano begins its long journey, starting out by being part of the amazing music coming out of Tin Pan Alley, with songs like “Play A Simple Melody” and “When The Midnight Choo-Choo Leaves for Alabam.”

We then follow the piano itself, as it moves throughout the decades — the Roaring 20s, the Great Depression, America’s involvement in World War II — until this grand piano with one faulty key ends up in a junkyard in the early 1950s.

And what a journey it is, chronicling how Berlin’s music expertly documented a changing America.

There are certainly some marvelous skits throughout the show, including the scenes set in a Speakeasy in the 1920s, when Larry Alexander performs “Pack Up Your Sings and Go To The Devil,” or when the production illustrates the vital role that a piano played in the silent movie era, when a piano player in the theater provided the musical accompaniment for what was on screen. Nick Drivas, with his baby face and hilarious ability to give us quirky, rapid-fire expressions, has a lot of fun showing us what silent movie actors did as the piano played on.

The same can be said for the scenes set during the 1930s, when the Depression has set in, and that old piano ends up out on the street, being sold by an owner desperate for money. It will eventually sell for a paltry $10, then move on to new adventures.

How Does The Show Pay Tribute to Irving Berlin?

While the play loosely follows the saga of what happened to one piano over the course of more than five decades, the real strength of “I Love A Piano” is in reintroducing audiences to one of the greatest living songwriters in American history.

This is particularly true at the end of Act One, when Lauren Culver leads the audience into a rousing rendition of one of Berlin’s most memorable songs, “God Bless America.” Berlin had written the song in the 1910s, then filed it away until 1938, when Kate Smith needed a patriotic song to mark the 20th anniversary of Armistice Day celebrating the end of World War I. Berlin had intended the song to show his deep gratitude to his adopted nation for allowing a Russian immigrant raised in poverty to become a successful songwriter.

Of course, that song would became our National Anthem a few years later when America entered World War II, and it continues to hold immense cultural significance today; the song was played right after the September 11, 2001 terrorist attacks on the World Trade Center.

Born on May 11 1888 in Russia, Berlin’s father was a cantor in a synagogue who uprooted the family to America in 1893, arriving in New York City, to escape the brutality of anti-Jewish pogroms in Russia. As an adult, Berlin once said his only memory of life in Russia was lying on a blanket by the side of a road, watching his house burn to the ground.

From that start, Berlin created so many songs still considered classics today, many of which are happily a part of this show: “Alexander’s Ragtime Band,” “Puttin’ On The Ritz,” “Everybody’s Doing It,” “White Christmas,” and the hilarious “Anything You Can Do,” performed to perfection by Culver, Meredith Pughe and Kari Ringer, as three aspiring actresses hoping to land the lead role in “Annie Get Your Gun.”

And the scenes set during World War II get a boost from the use of Berlin’s very funny song “Oh How I Hate To Get Up In The Morning,” another great showcase for Drivas’ comedic talent, and probably one of the most memorable songs ever written about life in the Army.

The cast of three men and three women superbly blend humor, comedic timing, sharp dance moves and rousing vocals to remind everyone that Berlin may have left us in 1989 (at the age of 101!), but his catalog of songs will probably never stop finding a highly appreciative audience. And in part, that’s because each song demonstrates his passionate love for this country.

The musical “I Love A Piano” is being performed at The Winter Park Playhouse now through Oct. 14. The theater is at 711 Orange Ave. in Winter Park, and you can call 407-645-0145 for more information or reservations.

Ticket prices are $42 for evening performances, $39 for seniors during evening shows, $32 for matinees, and $15 for students and theatrical industry professionals.

If you want a bargain on the ticket price, student rush “$10@10” tickets are available for $10, going on sale 10 minutes before a scheduled performance, if seats are available.