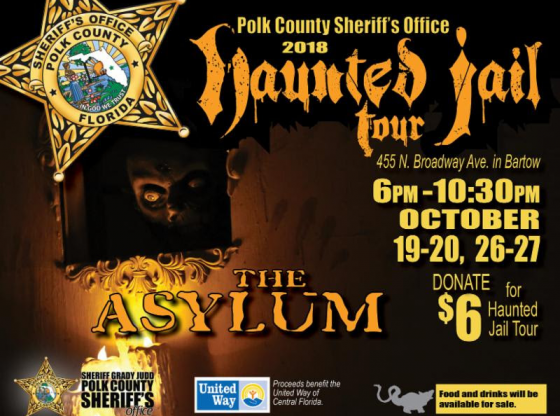 BARTOW — The historic Polk County Jail is an old enough building that no one knows how many inmates may have passed away there over the years.

But there doesn’t seem to be much doubt about another issue …..

That the old jail is haunted.

And there appear to be just enough ghosts in that old jail to help out a good cause this fall.

On Friday, Carrie Horstman, public information officer for the Polk County Sheriff’s Office, noted that they were bringing back their popular annual Haunted Jail Tour, right in time for the Halloween season.

The money raised from these jail tours will benefit The United Way of Central Florida.

What Happens During the Haunted Jail Tours?

“Visitors will be taken through several areas, while being entertained with stories about the mythical ‘asylum’ – including ‘fictional wards’ and cells within the jail,” Horstman noted. “This is a fun event each year, and we also raise money for charity.”

Each year, the Haunted Jail Tours have themes — last year it was the Ghost of Calvin, the legendary story of an inmate who committed suicide and still haunts the area.

This year, the ghoulish theme is Asylum.

This is also a family-friendly event, and if the little ones are too young or nervous to go through the haunted jail, there’s going to be a separate room with treats and games.

“Bring the whole family for a night of fun,” Horstman said.

There will also be food and drinks for sale every night. There’s a requested $6 donation, and everything raised will be used to help the programs at the United Way.

But is the jail truly haunted? That definitely seems to be the consensus, considering that over the decades there were inmates who stayed there on their way to an execution, and others who committed suicide in their cell. Over the years, both inmates and sheriff’s deputies have reported eerie sightings and happenings there.

In an article titled “Haunted Polk: A Brief History of Local Haunts,” author James Colter writes that the old jail is definitely on the list of haunted Polk County sites.

“Inmates have seen people walking the hallways before deputies were supposed to pass by, and officers have seen people in cells that were not supposed to be occupied. One ghost that has been seen many times is Calvin, an inmate that killed himself in the six-block area …. While one deputy was searching files, the back of a shelf flew off from across the room and nearly hit her in the head. Another deputy in a first floor holding cell felt her hair being tugged when no one else was there.While making their rounds, deputies have seen shadowy figures in the hallways that disappear once the lights turn on. One deputy claimed to have heard someone clicking a counter as if performing head count when officers no longer use such methods.”

What Else Is There To See in Downtown Bartow?

If you do decide to check out the Haunted Jail Tour, make a full night of it. It wouldn’t hurt to go a little early and check out Bartow’s historic downtown, which includes one other haunted hotspot.

Bartow itself is a very historic city, founded in 1851 as Fort Blount, then renamed in honor of Francis S. Bartow, the first brigade commander to die in combat during the American Civil War.

The old Polk County Courthouse Museum is at 100 E. Main St. in Bartow, directly across from the new courthouse. It was built in 1883, and has been a museum since 1997.

The courtrooms, now used for ceremonial events, have their own ghostly legends, including a Lady in White who haunts the building.

The basement, which can only be accessed by elevator, is also a special place, one where visitors and employees have heard agonizing screams – possibly from the victims of an explosion in the boiler room.

This year’s eerie theme is “Asylum.”