Murder For Two Brings the Hilarity to You

Home /Reviews/Murder For Two Brings the Hilarity to You

WINTER PARK — There’s been a murder in the house, although as our Inspector Marcus begins to sniff out clues, the audience may have latched on to a major one: there are only two actors on stage. How do you conduct a murder mystery with just two actors? Didn’t Agatha Christie usually have tons of possible suspects? Well, this one does too.

Ah, but therein lies of genius behind the zany Off-Broadway musical comedy Murder For Two: just because you have two actors doesn’t mean you can’t have multiple characters! The genius behind the production that opened this weekend at The Winter Park Playhouse was to pair a talented newcomer in Boston’s Jared Troilo with a Central Florida comedic and musical institution, Kevin Kelly, to empower a show that moves at such lightning speed that this 90-minute production feels like it zipped by in 30 minutes.

This one is the perfect summer production for getting into an air conditioned theater to beat the heat and share plenty of laughs with a hearty audience.

What is the Musical Murder For Two?

This new production that opened Friday and runs through Aug. 28 is the kind of madcap farce that can be a real crowd pleaser if it’s done right; the show by playwrights Joe Kinosian and Kellen Blair premiered at the Chicago Shakespeare Theatre in 2011 and now has made its way to the Playhouse. This whodunit is a marvel to watch not necessarily because of the plot or the mystery itself, but the key concept behind it: There are 14 characters in this show, including the inspector and 13 suspects. And it’s our Boston wonder boy Troilo who plays the often bumbling inspector (who keeps calling his chief to see if he’s doing things right), and its our glorious Playhouse veteran Kelly who handles the suspects — all 13!

Now, doesn’t that sound fun? And yes, it is!

Why is the musical Murder For Two so Funny? 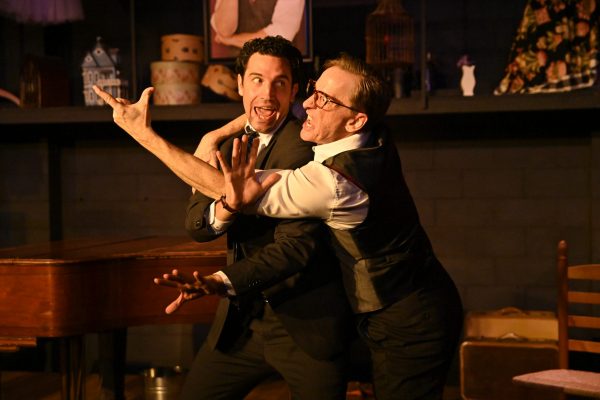 A behind-the-scenes star of this production is the show’s director, Roy Alan, who understands that to keep a farce like this entertaining, it needs a lot of ingredients, including speed, sight gags, funny props, audience participation, and the occasional breaking of the third wall. Examples: several times during the show, a cell phone rings, and as any loyal theater audience knows, there’s always that one dumb dumb seated in the crowd who forgets to silence their smartphone. In this case, Kelly takes on the task of admonishing the audience … until it becomes clear this bit is part of the craziness.

There were also more than a few moments when both Kelly and Troilo briefly stepped out of character to make quick toss-off remark, and I suspect they were encouraged to occasionally improvise and have fun with the audience whenever possible. It was a real treat.

The casting proved to be the final ingredient that made this show such a pure delight. If you’ve seen Kelly in past Playhouse shows, you know he’s ideally equipped for handling this kind of visual comedy, and his spot-on over-the-top voices — both male and female — make it crystal clear which character he’s suddenly become so it’s never confusing figuring out who he is. And I must say, his seductive women are an absolute riot.

Having said that, you might assume that Troilo has the easier part, playing the same character, and one who simply reacts to whatever his fellow cast member is doing. In truth, Troilo does a pretty spectacular job keeping Inspector Marcus as fully immersed in zany movements, sight gags, hilarious facial expressions, and clever reactions. Troilo has as much of a key role in making this show funny as 13-character Kelly does, and they play off another another brilliantly.

Two other things to note about the show: both actors are also talented at playing the piano, which becomes the main instrument for their songs, and they’re also first rate singers.

And then there’s that 90-minute length. Here’s a tip: when the show ends and the actors take their bow, don’t make a dash for the exit, even if you’ve had a drink or two during the show, nature has called, and you really really want to beat the crowd to the restroom. The two actors have a final gag to perform, one that plays off the concept of “making them wait,” and it’s a scream.

How Can I Get Tickets for Murder For Two?

Murder For Two is being performed at The Winter Park Playhouse, 711 Orange Ave, Suite C in Winter Park.

Tickets are available for $46 during the 7:30 evening shows ($43 for seniors), $39 for the 2 p.m. matinees, and $20 for students and theatrical industry professionals. Students can also take advantage of rush “$10@10” $10 tickets 10 minutes prior to a performance when seats are available.

To purchase tickets for Murder for Two or the 20th Anniversary Series at The Winter Park Playhouse call the box office at 407-645-0145.