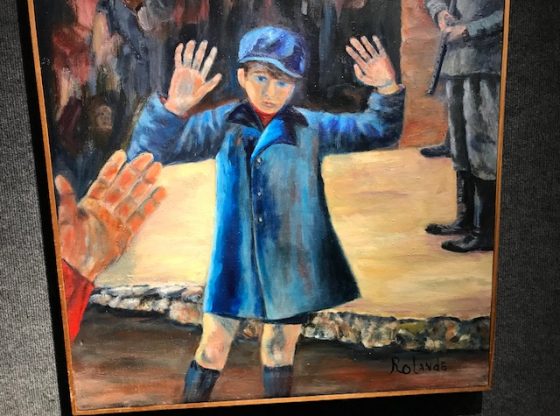 MAITLAND — It was a photograph that caught the attention of a teenager named Rolande R. Faucon, and it haunted her. It showed a young boy in a coat and cap, holding his hands in the air, as German soldiers aimed guns at not just the face of that child, but also the crowd of innocent bystanders behind him.

It would inspire Faucon, who was living in France during World War II and the German occupation of her country. She was also an artist and she created “Enfant a l’Etoile,” an oil painting that captured and dramatized that eerie moment.

“This painting was inspired by a 1945 photograph which I saw in 1947,” she would later write. “The memory of the nonchalant cruelty by German soldiers has remained with me all my life.”

The works of Faucon and Peter Sanfilippo, an American soldier who served with the 633rd Field Artillery during the second world war, are part of a new exhibit titled “Artistic Expression Through Conflict: 1939-1945,” now on display at the Holocaust Memorial Resource & Education Center in Maitland. It covers artistic expression in three fields — paintings, photography, and music– and what the artists did to vividly capture lasting images of this devastating war.

What is the Exhibit Artistic Expression Through Conflict About?

This exhibit is on loan to the Holocaust Center from The Institute on World War II and the Human Experience at Florida State University’s Department of History, which preserves the photographs, letters, and other artifacts of service members and their families dating back to that war.

The exhibit features a number of paintings by Faucon, who was 15 years old when the war started, and Sanfilippo, whose unit went to Sicily and the Italian mainland.

As the exhibit’s liner notes point out, “Some soldiers painted during and after the war to pass the time and reflect on the places they visited and the conflicts they witnessed firsthand.”

While many of the paintings are dramatic, others reflect the drudgery of this experience, such as Sanfilippo’s water color “Coffee Break,” which he painted in 1945, showing soldiers crowding around a kitchen tent on a cold, snowy day, waiting for hot coffee.

Some of his other paintings show the nurses who cared for wounded soldiers, Red Cross volunteers, and soldiers waiting for religious services to begin.

Several of his works are undeniably sad, and troubling. “Loss Of Three Comrades,” a watercolor done in 1944 in Monte Cassino, Italy, expresses the deadly impact of an explosion that caused the death of three soldiers.

And his watercolor “Returning Refugee Group,” done in 1944, shows the refugee families walking back to their villages after having been displaced by the Nqzis.

“The artists focused on the individual during wartime, from soldiers in battle to children growing up during the war,” the liner notes state.

Faucon, who lived in Mareuil Sur Ay, Marne, France, spent time under German occupation, and her brother was sent to a German labor camp for three years. She also lived under the American occupation. In March 1946, she and her husband moved to the United States.

Faucon created similarly disquieting works, such as “Girl At The Window,” an oil painting that shows a young woman watching the battle going on in the sky.

The exhibition also features black and white photos by Paul K. Dougherty, an American stationed in Europe during World War II who tailed General George S. Patton’s Third Army and recorded Patton’s movements; and Charlotte Dee Mansfield, who became part of the 8th Air Force and was stationed in High Wycombe, England in May 1944. She would celebrate Victory in Europe Day at this station, and took numerous photos of the excited service members celebrating the end of the war.

“Photography served two main purposes during World War II,” the exhibit notes. “To document significant events during the conflict and commemorate the personal experiences of those who served.”

The exhibit also looks at the role that music played in providing entertainment to American soldiers during this brutal conflict.

“During World War II, the United Service Organizations (USO), founded in 1940, provided concerts, dances, special dinners, plays and other social occasions for GIs,” the exhibit notes. “The United States military promoted these events to increase morale, improve comradery among soldiers, and help entertain those enlisted during their free time.”

How Did This Exhibit Get Created?

Florida State University’s Department of History established the Institute on World War II and the Human Experience to capture and preserve this history for future generations, with a focus on the everyday lives of men and women who were both military personnel and civilians.

The works they compiled for this exhibit show the often intense pressures of wartime — but also clearly reflect the way soldiers were able to bond during such a horrific experience.

“From 1941 to 1945, millions of Americans left the security of their homes for the uncertainty of war in unfamiliar lands — to do their duty, very often at the sacrifice of life and limb,” the Institute notes in their literature.

What they have preserved includes letters, newsletters, diaries, memoirs, books, periodicals, even poetry.

The Holocaust Center will display this exhibit through April 5. The museum is at 851 N. Maitland Ave. in Maitland.

College Park Gears Up for a Very Fine Saturday in the Park
A Potentially Historic Vote: Will Florida Ratify the Equal Rights Amendment?