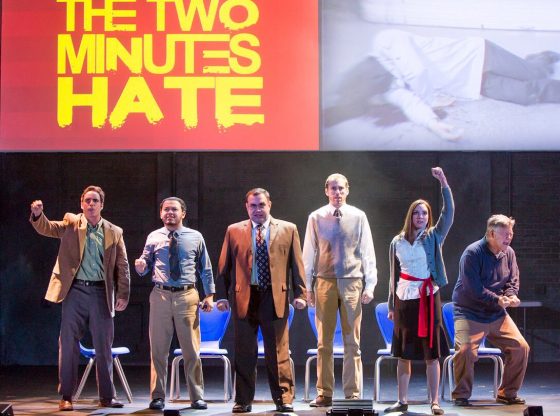 WINTER GARDEN — 1984, a new play by Robert Icke and Duncan Macmillan making its Central Florida debut at the Garden Theatre, comes with a lot of hype.

Both in its original staging and this one, there have been reports of audience members leaving and/or made ill by what they encountered.

I can tell you that the hype is justified, just not for the reasons heard most often.

Based on the acclaimed novel by George Orwell that gave us several well known catch phrases used in political talk to this day (Big Brother, Surveillance State, etc.), the stage work takes us through the journey of one Winston Smith (Brian Zealand), who may or may not have ever existed, but who rebels against the totalitarian state he is forced to live in. The sheer terror of Winston’s first act of rebellion is palpable, as is his fear in making contact with his kindred spirit and eventual lover, Julia (Kristie Geng).

Together, they embark on several small steps of resistance before taking a leap of faith with conflicted state member O’Brien (Stephen Lima).

Garden’s production is incredibly well cast. Zealand, here portraying a rebellious Everyman we would all hope to be given similar circumstances, gives an emotionally nuanced and at times unbelievably raw performance.

Geng, for her part, does a great job of vacillating between cold pragmatist and eventual hopeful romantic. Lima uses every ounce of charisma and charm to convince the two rebels, and us, that perhaps there is reason for some hope.

The remaining cast is credible in their performances as they all take on multiple roles, but a special recognition of Central Florida stalwart Tommy Keesling is required: he takes parts that could be thrown away and imbues them with three dimensionality and realness that demands our attention, whether for laughter, scorn or pity.

What Else Works in This Play?

The direction, here under the ever capable hands of Bobbie Bell, is close to impeccable. Using technology combined with lighting effects and sound elements, he shifts time and place quite effectively for a piece in which it might be easy to get lost.

There is one set and staging reveal I will not ruin but that definitely surprises and raises the stakes. Kudos to his team members Ryan E. Finzelber (lighting designer) and Jack Audet (sound designer) for their work.

Thankfully, Bell has brought in Bill Warriner for fight choreography in a piece that includes torture and violence. Bill’s ability to create on stage violence that has us believing what’s occurring is real is on full display here. The scenes in question are, indeed, a tough watch.

That said, the true terror is not in the violence and torture that has led audience members to exit mid-show (three by my count at the matinee I took in). The horror is in realizing first that we are perilously close to creating the exact society the Orwell warned of so many years ago and second, that regardless of your political bent, you could easily see it happening to you, soon … in this country … in this world.

Theater is not always meant to be easy or even likeable. When done well, however, it should leave you changed.

The Garden Theatre is at 160 W. Plant St. in downtown Winter Garden. Their Central Florida premiere of the play 1984 runs through March 17. This production contains strong adult language, partial nudity, strobe effects, and graphic depictions of violence and torture.