From bloody crime scene to tourist attraction: welcome, brave souls, to the home of Lizzie Borden. 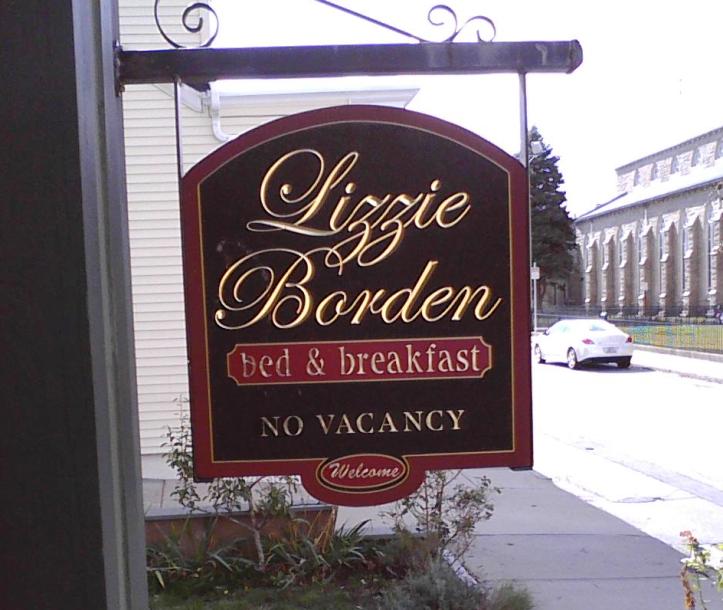 FALL RIVER, MASSACHUSETTS — Lee-Ann Wilber gets asked the question all the time, and she makes no bones about giving you a straight answer.

“We are haunted,” she said.

Asked when the last ghostly incident in the home was, Wilber shrugs and adds, “In the last couple of weeks.”

That home is at 92 Second St. in downtown Fall River, Massachusetts, a very historic property that was built in 1845, and is set amidst streets that have scores of other houses built more than a century ago.

Second Street is also a mix of both the historic and the modern. Across the street is a new courthouse, the Fall River Justice Center, constructed in 2010.

The home at 92 Second St. is a similar mix of the historic and the modern. Beautifully preserved to look just as it did a century ago, it’s not a residential property today, but rather a business — and a unique one. It’s the Lizzie Borden Bed & Breakfast and Museum, a place where visitors can come to stay in one of the property’s eight bedrooms.

Wilber, the manager of the property, knows that this particular bed and breakfast doesn’t just appeal to history buffs who love the quaint look of historic properties. The main attraction is the identity of the woman who made both that house, and in some ways the city of Fall River, so infamous, even today.

What is the Legend of Lizzie Borden?

It was on Aug. 4, 1892 when Fall River police detectives began investigating a hideous double homicide. Andrew J. Borden and his wife, Abby, were discovered dead in the Second Street home. They had been bludgeoned to death. Andrew Borden received 10 blows to the area of his skull between his ears, eyes and nose, and Abby Borden got 18 blows to the back of her head, both by a handless hatchet.

Lizzie, Andrew’s daughter and Abby’s daughter-in-law, was arrested and charged with the murders, but following a 13 day trial, she was acquitted. She briefly returned to that home, and stayed in Fall River for the rest of her life, eventually moving to a house in Fall River’s Highlands neighborhood on French Street. She died on June 1, 1927.

In the decades that followed, the Second Street home survived, and in 1996, it became a bed and breakfast and tourist attraction, appealing to those who love to see 18th century property preserved and restored to its original Victorian appearance — and to those with a curious fascination about this grisly case.

There’s enough fascination, she said, that October remains one of the busiest times of the year for this tourist spot.

“June, July, August and October tend to be our busiest times,” Wilber said. “It’s steady. Like everything else, we’re seasonal. Sometimes we rent out the entire house. People have rented it out for birthday parties and different events, like reunions.”

The Lizzie Borden Bed & Breakfast has three floors, with a kitchen, dining room and parlor on the first floor — including the sitting room where Andrew Borden was found dead. For lovers of the morbid, there is a replica of the sofa that Andrew Borden was murdered on, a duplicate of the original crime scene photo from Aug. 4, 1892, with his body slumped onto the sofa and his head bloody and mutilated, and even a replica of Borden’s skull, with the 10 blows to the side of his face.

The 92 Second St. house was used as a private residence for years before it became a tourist attraction, Wilber said, and a lot of the furniture now stored there was found in area antique shops, to capture the look in photos taken around the time of the murder.

“Some of it came with the house, and some I had to find on my own,” she said.

There are bedrooms on the second and third floors, including the one where Abby Borden was found slumped on the floor.

“This is the room where Mrs. Borden’s body was found,” Wilber said. “She was found between the bed and the dresser.”

Why Does This Case Still Fascinate People?

The case has lived on over the years, and continues to fascinate people and to be the subject of popular entertainment shows. In the 1970s, actress Elizabeth Montgomery played the accused axe murderess in a television movie, “The Legend of Lizzie Borden,” and the museum has the dress that Montgomery wore in that film.

A crew from the cable show “Ghost Adventures” has visited the house aired a program on it.

“They left at 2 in the morning,” Wilber said. “They were supposed to leave at daybreak, but they left early. That surprised me.”

Over the years, the bed and breakfast has developed a reputation for eerie occurrences, Wilber said, making it particularly popular during the Halloween season. Guests frequently point out the odd things that happened to them during the night, she added.

“You always have to wonder what might or might not have happened to them,” she said. “Everyone’s experiences are different.”

That reputation is well deserved, said Mark Lomastro, the tour guide at the property, who provides daily tours of the home.

“I take them through the house, from the first floor to the third and back down,” he said. “It’s a historical tour, but some guides like to throw in paranormal tidbits, if we have time.”

The guests have their own stories to tell, he added.

“There are reports of people leaving in the middle of the night, because they hear children running back and forth on the third floor,” Lomastro said, adding that he has his own creepy experiences to share.

“From the very first day I came here, odd things have happened to me,” he said. “I’ve heard knocking throughout the day on the door connecting the kitchen to the dining room. It’s two knocks. The knocks always happen in the dining room.”

This has happened in front of guests taking his tour, Lomastro said.

“Some of them are in shock, some laugh it off,” he said. “But that’s why people keep coming back.”

Wilber said the guests often appreciate the home more than city residents. She said the city has done little to promote this attraction, and some residents, she added, are tired of being known as the home of an accused axe murderess.

“A lot of people in the city don’t want to talk about it, or say it’s here,” she said. In fact, the critics have even given rise to a rumor, Wilber said, that the 92 Second St. home where the murders got committed was demolished decades ago, and the property there now was built years later, with no connection to the murders at all.

“Some people actually think it was torn down,” Wilber said.

Her answer: come to the Lizzie Borden Bed & Breakfast and Museum, spend a night here, turn off the lights after dark …

… and see what happens.