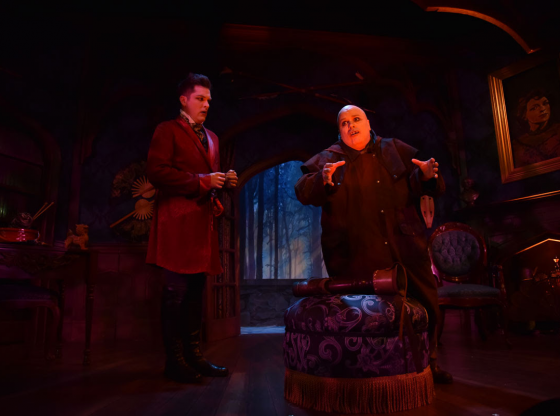 ORLANDO — In a 1976 skit on Saturday Night Live called “Drag Racing Today,” Dan Aykroyd and Eric Idle, dressed in drag, approach the starting line and begin racing. After a minute, Aykroyd stops and says the skit isn’t working. Idle responds that drag always gets big laughs, but after pausing and listening, he rather dourly adds, “I don’t hear them laughing,” and they abandon it.

The joke, of course, was that traditional farcical humor of men in drag had lost its appeal by the hip and trendy 1970s. Well, with all due respect to the writers at SNL, there’s no question that drag just made a roaring comeback in the Orlando Shakespeare Theater’s hilarious “Penny Dreadful” spoof, “The Mystery Of Irma Vep,” which opened on Friday.

Part of the play’s charm comes from the way the cast lovingly pays tribute to the clichés of gothic horror, similar to the manner in which Mel Brooks paid comedic tribute to old Hollywood horror films in “Young Frankenstein.”

So much of the dialogue sounds like it could actually have been written for a very old-fashioned gothic thriller, assuming it got played “straight” — although mercifully that’s not at all what actors Chris Crawford or Brad DePlanche deliver. These two performers do a spellbinding job playing multiple characters, moving with lighting speed every time they frantically rush off the stage, only to reemerge as another, radically different character.

And they milk each character for so many hysterical laughs that your sides start to ache by the final curtain call. That’s not at all a bad thing.

Is This A Halloween Show?

“The Mystery Of Irma Vep” is a sequel, of sorts, to the Orlando Shakes’ success in October 2017 with their wildly campy version of “The Hound Of Baskervilles,”, which expertly turned the popular Arthur Conan Doyle thriller into a goofy laugh-fest. As successful as that comedy was, I think “The Mystery of Irma Vep” is even funnier, largely because Crawford and DePlanche are uniquely suited for the camped up spirit of this show, and know how to deliver the belly laughs.

“The Mystery of Irma Vep,” a play by Charles Ludlam, is a satire of Victorian melodramas and gothic thrillers in the vein of books like “Wuthering Heights” and films like Alfred Hitchcock’s “Rebecca.”

“Irma Vep” is set in Mandacrest Estate, the home of Lord Edgar, an Egyptologist, and his wife Lady Enid.

Edgar still mourns the loss of his first wife, Irma Vep, whose portrait hangs prominently over the fireplace, a candle constantly lit right below it to illuminate her beauty. That creates some tension with Lady Enid, Lord Edgar’s second wife.

The house staff includes their maid, Jane Twisden, who seems to know quite a bit about the history of the house and its occupants, and their rough-and-tumble handyman, Nicodemus Underwood.

Along the way, a roster of old Hollywood horror movie monsters arrive to spice things up. Enid gets attacked by a vampire, a werewolf starts ravaging the countryside, and Edgar seeks answers in an Egyptian tomb, where he manages to resurrect the mummy of an Egyptian princess, and one with gastrointestinal issues.

When it comes to spoofing the elements of classic horror, “Mystery Of Irma Vep” mercilessly takes no prisoners.

What Makes This Show So Funny?

While the play itself is clever and has some razor-sharp lines, it’s really what the two performers and the Orlando Shakes crew do with it that makes this one such a memorable comedy.

Major kudos should go to scenic designer Bert Scott for the fantastic job he did creating Mandacrest Estate, complete with a secret passageway, that spooky fireplace where Irma Vep’s portrait is mounted, and the doors that open to the yard where vampires and werewolves prowl.

And the play’s true raison d’etre is the casting of Crawford and DePlanche, who seem to be working tirelessly — and exhaustively — to keep the audience laughing. Their rapid-fire timing is never less than stunning to watch.

DePlanche is a riot as the monstrously-looking Nicodemis, and I was never short of amazed when he’d made a hasty exit and emerge seconds later as Lady Enid, creating two characters who share no similarities. He performs each one to side-splitting perfection.

And yes, they both prove that men performing in dresses can be uproariously funny.

While there’s a touch here and there of adult humor, the play is actually a good one for younger audiences as well, who are likely to appreciate the show’s zany, goofball larfs.

It’s worth noting that in 1991, “Irma Vep” became the most produced play in the United States, and in 2003 it got the distinction of becoming the longest-running play ever produced in Brazil.

It’s not hard to see why. This show is ideal for anyone who wants to set aside their daily stress and just have a delightful evening of virtually non-stop laughter.

“The Mystery of Irma Vep” is being performed through Nov. 18 at the theater at 812 E. Rollins St. in Loch Haven Park. Performed in the Orlando Shakes’ Goldman Theater, the play runs for two hours with a 15 minute intermission.