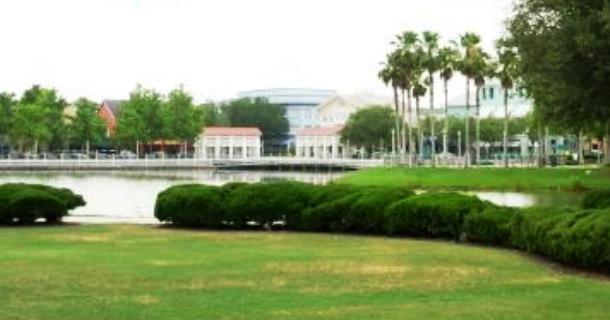 CELEBRATION – Just as this community was gearing up to celebrate the holidays with snow, tree lightings and carriage rides, media coverage of Celebration’s 12th Annual Now Snowing event got shunted aside by ongoing reports about two violent deaths in a community known, until this month, for never having experienced a murder before.

On Nov. 27, Celebration kicked off the community’s annual holiday events with a special tree lighting ceremony that featured live music, an appearance by Santa Claus, and manufactured snow falling on Market Street.

Just a few days later, though, the community was back in the spotlight, this time nationally, and not for the holiday fare.

Earlier this week, Osceola County Sheriff’s detectives released the name of the Celebration murder victim, 58-year-old Matteo P. Giovanditto.  Two days earlier, Osceola deputies had responded to a call from a neighbor who told them she went to check on Giovanditto and found him dead in his Water Street condo.

Not much information has been released about the case. The investigation is on-going, with detectives calling the death “suspicious.” This is believed to be the first homicide in the community.

It wasn’t the only death to make the news in Celebration this week.

On Dec. 3 at 2:20 a.m., deputies finally got into a Yew Court home after hours of negotiations. A Celebration man had barricaded himself inside the house, but when deputies got in there, they found him dead of an apparent self-inflicted gunshot wound. He was later identified as Craig Foushee, 52. The previous day, deputies had spent more than 14 hours negotiating with Foushee, even sending tear gas into the house in an effort to get inside.

It started after Foushee, who was alone inside the house, indicated he might harm himself, the sheriff’s office said. As a precaution, several local streets were closed and residents in the vicinity of the house got evacuated.  Schools were put on lockdown, and deputies worked with school officials to ensure students could leave at the regular time.

Twis Lizasuain, public information officer for the Osceola County Sheriff’s Office, noted that this was done because Foushee shot at deputies several times earlier in the evening when SWAT team members tried a forced entry through his front door, and later during ongoing negotiations. Although no deputies were injured, Lizasuain noted that deputies didn’t return fire because they couldn’t focus on a target.

After more than two hours without any communication, deputies used a robot to locate Foushee, just before a SWAT team entered the house.

The sheriff’s office noted that this case isn’t related to the Celebration homicide investigation, and Foushee’s death was turned over to the Florida Department of Law Enforcement for further investigation.

The two cases attracted plenty of local media coverage from Orlando area television stations, but also ended up making the national news as well. CNN Headline News covered the two incidents on Friday, with a special mention of Celebration being a town originally sponsored by Walt Disney World.

The incidents happened just as the Osceola County community was hoping for solid attendance for Town Center’s annual holiday events.

Now Snowing, as the ongoing holiday event is called, features the manufactured snow along with an ice rink, a remodeled Celebration Express Train and a “Winter Wonderland Spectacular” featuring strolling Charles Dickens carolers, photos with Santa, and horse drawn carriage rides. The snow falls nightly in Town Center at 6, 7, 8 and 9 p.m.

The month long holiday event includes a special Radio Disney Holiday concert on Saturday, Dec. 11 featuring All-Star Weekend and the winner of this year’s nationwide NBT contest on Radio Disney. The event ends with a New Year’s Eve Celebration including live entertainment starting at 6 p.m. and fireworks at midnight on Dec. 31. There will also be community performances in Celebration on Jan. 1-2.

To learn more about Celebration’s holiday activities, log on to www.celebrationtowncenter.com or call 407-566-4007.

Searching our bags and … what?! The Tea Party calls for an end to invasive airport pat downs by the TSA
Parliament House celebrates Dickens — and celebrities — in a unique, hilarious version of “A Christmas Carol.”