Winter Park Ponders How Best To Deal with the Homeless 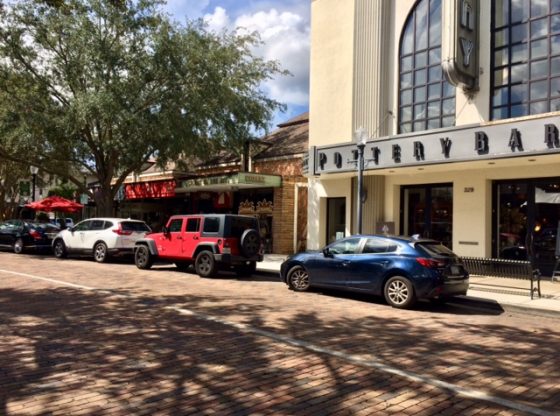 WINTER PARK — The City of Winter Park has a lot of assets when it comes to attracting tourists and visitors, from the popular shops and restaurants along Park Avenue to brand new shopping plazas like Lakeside at Winter Park.

But does this affluent city close to Orlando also have a homeless problem?

During the meeting, held in the City Commission Chambers, Kyle Dudgeon, the assistant director of the City of Winter Park, and Jeff Briggs, manager of the city’s Planning Department, were repeatedly asked about how the city deals with the homeless, including when it comes to the matter of aggressive panhandling.

Dudgeon noted that the city’s police officers often take the approach of trying to connect homeless people with municipal services designed to help them get back on their feet.

“PD (the Police Department) tries to provide opportunities for folks to get services,” Dudgeon said, “using the carrot over the stick approach.”

Briggs, though, noted that when panhandling gets too aggressive, the officers can take stronger action.

“When their behavior gets out of control, that’s another matter,” Briggs said.

The issue is bit more complex in Winter Park, Briggs noted, because Park Avenue often attracts a different kind of street person looking to earn money — including musicians who perform in Central Park.

How Did the City Deal With Street Performers?

In 2015, the City Commission approved an ordinance to ban street performers in the downtown historic district. That proposal was first approved by the city’s Parks and Recreation Board.

The ordinance was also endorsed by the Park Avenue Merchants Association after more than a few of their members complained about loud noise from street musicians and sidewalks getting blocked, making it harder for tourists and pedestrians to get around.

There were also complaints that these street musicians were using speakers to perform right outside retail shops and restaurants, hindering business on the avenue.

Briggs said there was a feeling that some of these street performers were getting out of control.

“We had people coming down with car batteries and hooking them up to an amplifier and rocking and rolling,” he said.

In drafting this proposal, the city often referred to a similar ban in the city of St. Augustine, which also took aim at street performers.

The performances were banned in the public areas of Winter Park’s Central Business and Hannibal Square districts, including Central Park and the Farmers’ Market, unless they were part of special events sponsored by or approved by the city.

Which City Agency Deals with the Homeless?

When asked if it was the responsibility of police officers to deal with the homeless, Dudgeon noted that “We have two Community Resource officers, and that is part of their task.”

He added that technically, this issue falls under the jurisdiction of the city’s Fire Department.

“Our code enforcement (for the homeless) is actually under our Fire Department,” he said.

Asked if the city has a set policy on dealing with the homeless, or if officers respond only after a resident or business owners files a complaints, Briggs noted, “It’s mostly complaint driven.”

The issue of homelessness is becoming a bigger concern across the region. Central Florida’s homeless population may have increased significantly in the past year because of families dislocated by Hurricane Irma, which struck Florida in September 2017, and Hurricane Maria, which devastated Puerto Rico last year, knocking out power to virtually the entire island. Quite a few of the island’s residents tried relocating to Central Florida later in the year.

Their numbers swelled so quickly that in March, the Heart of Florida United Way even launched a new Hurricane Maria housing assistance program for displaced Puerto Ricans who lacked the deposits needed to move into a home or apartment.

Orange County Mayor Teresa Jacobs worked with the United Way on this program, because more than 1,000 families and individuals were still staying in Central Florida motel rooms paid for by FEMA.

While the hurricanes definitely didn’t help, the other major challenge is that housing in Central Florida has become considerably more expensive as the economy has gotten stronger.

The real estate website Zillow ranks Orlando’s housing market as “Hot,” noting that the median home value in Orlando is now $230,300, and that Orlando home values have risen 8.6 percent in the past year.

Those prices may be on the way up, as the Central Florida economy gets stronger. On Friday, the office of Gov. Rick Scott noted that August 2018 marked 41 consecutive months of the Orlando area having the highest job creation in the state.

The Orlando area, which includes Winter Park, added 51,500 new private-sector jobs in the past year. The unemployment rate in Orlando was 3.4 percent, below the national average of 3.9 percent.

Winter Park remains one of the most highly desirable places to live in Central Florida, and housing there is even more expensive.