Will Hyperion Wharf save Pleasure Island or make it more ordinary? The debate is on.

Home /Tourism/Will Hyperion Wharf save Pleasure Island or make it more ordinary? The debate is on. 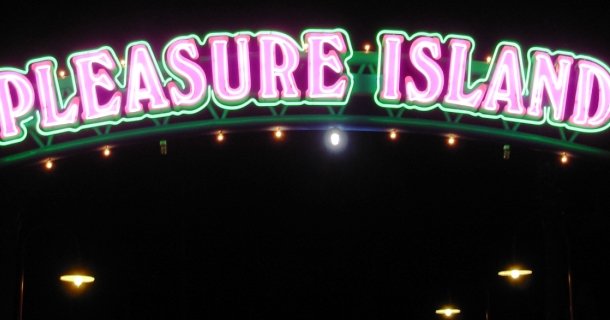 LAKE BUENA VISTA – Walt Disney World calls it “re-imagined”: the theme park giant’s plans for the nightclub area built in 1989 to provide more fun for adults, but that’s gone through some extensive changes in the past two decades.

Last month, Disney announced that work was about to begin on a revamped Pleasure Island and Downtown Disney, in a series of projects expected to create more than 1,200 new jobs over the next three years.

“We have made great progress since first announcing our vision to bring new shopping, dining and entertainment experiences to Downtown Disney, many of which can’t be found anywhere else and have already become guest favorites,” said Keith Bradford, vice president of Downtown Disney.  “We look forward to providing even more ways for our guests to enjoy Downtown Disney, while at the same time creating new jobs for Central Floridians.”

But the authors of books on Disney and Central Florida’s theme park industry wonder if the changes will end up making Pleasure Island even less distinct.

“It’s disappointing that Disney would bring in third party vendors for shopping and dining options that you could find at your own neighborhood mall,” said Seth Kubersky, the author of “Universal Orlando 2011,” and several upcoming books on the region’s theme park industry.

“It’s not the unique entertainment that you’d drive halfway across the country to see,” he added.

The changes coming to Pleasure Island include the recreation of an early 20th century port city and amusement pier, to be called Hyperion Wharf.  This port district will offer “stylish boutiques and innovative restaurants” open during the day, Disney announced in a news release, while “by night, thousands of lights will transform the area into an electric wonderland.”

Bradford said Hyperion Wharf will “offer guests of all ages a vibrant atmosphere and new experiences that can be enjoyed by day or by night.  Whether looking for a great place to dine with the whole family or a place to relax and enjoy live music, Hyperion Wharf will provide the perfect setting for guests to make new memories with us.”

Others, though, are skeptical.

Pleasure Island first opened in 1989, and as Kubersky noted, it was designed to be ambitious expansion of the smaller shopping plaza known as the old Disney Village Marketplace.

“It was originally called the Lake Buena Vista Marketplace,” Kubersky said. “It had been there since 1971. With Pleasure Island, you can see it as the reverse of what they wanted to do in Las Vegas at the time. Vegas decided they wanted to be more family friendly, and Disney added Pleasure Island to give adults things to do while the kids were in bed at night.”

There was another motive, Kubersky said.  At the time, the region’s top night spot was Church Street in downtown Orlando.  The popular Church Street Station brought in adults looking for nightclubs and alcohol.  Then Pleasure Island offered an alternative.

“The feeling was Disney likes to keep money on Disney property,” said Jim Korkis, a former Disney cast member and recognized Disney and Pleasure Island historian, and author of the book “The Vault of Walt.”

“Since guests found there was nothing to do on Disney property at night, people were leaving and going to Church Street Station, which at the time was the fourth most popular tourist destination in Florida after Disney, SeaWorld, and Busch Gardens,” Korkis said.

“The original intention was to put Church Street Station out of business,” Kubersky said.

It worked.  Wholesome, family-oriented Disney introduced night clubs with disco dancing and plenty of alcohol – risqué for a theme park that primarily emphasized its appeal to children and families, Kubersky noted.

“Compared to everything else on Disney property, it was,” he said.  “It was never R-rated, but sometimes it was a strong PG-13.  Their discos for a while were quite happening, and Pleasure Island was very successful for the first decade.  Within 10 years, Church Street Station was out of business.  It was very effective.”

“A lot of people thought Pleasure Island was meant to represent the theme park in the movie ‘Pinocchio,’ where people go and drink too much and make asses of themselves,” Korkis added.

Kubersky said changes started after that. With the demise of Church Street Station and Downtown Orlando as competitiors, he said Disney appeared to lose interest, while at the same time Universal Studio’s City Walk began drawing away more of the nightlife crowd.

At the same time, Disney did away with Pleasure Island’s admission fee, opening the gates to the general public.

“The real change happened when it went from being a gated attraction to letting anyone through,” Kubersky said.  “Then they just had to pay to get into some of the clubs.  At that point, the demographics started to shift.  Once they got rid of the gates, nothing ever quite worked.  It changed being from a special place where they could control the clientele into a shopping mall. It just became a mall to hang out at.  Disney also got rid of the fireworks show at night.”

“That’s where people to start to track the fall of Pleasure Island,” Korkis added.  “It just became, here’s a bunch of clubs and you can go party.  With the admission price, you sort of controlled who got in.  At the same time, City Walk had the aura of being fresher and cooler and with it.”

In addition to bringing the new wharf district to Pleasure Island, Disney also announced several other projects underway at Downtown Disney.  They include a renovation at Lego Imagination Center, with a 3,500 square-feet expansion and the addition of some new Lego exterior models that recreate scenes from classic Disney movies.  While Disney is working on this project, Merlin Entertainments is building Legoland Florida – modeled after the popular theme parks in Europe and California – at the site of the former Cypress Gardens theme park in Winter Haven.

Kubersky, though, said Disney appears to be inviting outside vendors to come in as the highest bidder.

“It’s all third party vendors,” he said.  “Disney doesn’t seem interested any more in developing their own concepts.”

Korkis agreed, saying “The realization is Disney is a business and it has to be held accountable to its stockholders.  Will Hyperion Wharf be good business? Disney thinks so, because it will not be making any personal investment.  Basically Disney is supplying the location and other people are supplying the money.”

Korkis said he hopes the new wharf shopping district is a success, but he thinks Disney may be making Pleasure Island less unique and more pedestrian – shops and dining options available at plenty of other shopping plazas, lacking the distinct Disney touch.

“It will be interesting to see how that develops,” he said.  “I’m a huge Disney supporter.  I want Disney to be around for the rest of my lifetime and continue to do good things. But the vision they have now is a more narrow vision – ‘Let’s have more restaurants and shops.’  With this new plan, there is nothing that people can’t find elsewhere.”

Is it art or just scratching? Living Canvas aims to set a higher standard for the tattoo industry
Driving while intoxicated is dangerous, but how about driving while buzzed?

Welcome Center Hosting Back to…