What’s to love during an Orlando vacation? The Outta Control Magic Comedy Dinner Show has your ticket.

Home /Theater, Tourism/What’s to love during an Orlando vacation? The Outta Control Magic Comedy Dinner Show has your ticket. 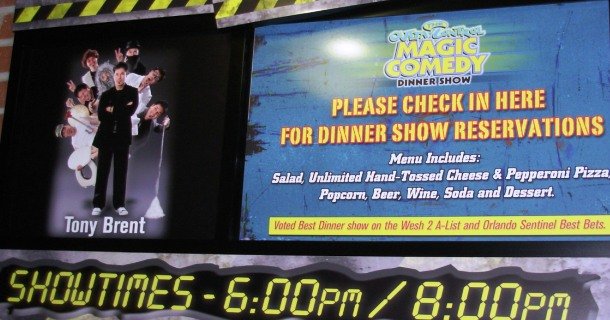 ORLANDO – So what is it that tourists want to do when they flock to Central Florida for the holidays? Decisions, decisions, Rich Miller said.

In addition to the theme parks, a really good dinner show is on the list, said the Philadelphia resident who is spending two weeks in the Orlando area with his girlfriend, Jennifer Schultz.

“I think we wanted to do this last year, but didn’t,” Miller said and he stood in line for The Outta Control Magic Comedy Dinner Show at WonderWorks. “There’s just so much to do down here. I think you have to do Disney first – that’s an unwritten law, I think, so we did that last year. We pack a lot in.”

Miller and Schultz have been coming to Orlando for years, and have taken in other dinner shows in this tourism Mecca – Capone’s, Sleuth’s Mystery Dinner Show, Medieval Times, and so on. The Magic Comedy Dinner Show has been on their to-do list as well.

“It’s supposed to be one of the best shows,” Miller said, adding that he’s been a magic lover for decades.

“I always have been – all guy-kids are magic fans,” he said.

“I’m kind of just looking for a good show,” Schultz added. “I hope it will be something different.”

On a cold, blustery night, a long line waited to get into the 6 o’clock dinner show, featuring the talents of Tony Brent. The row of tables inside the theater quickly filled up as an international crowd sat down for all-you-can-eat servings of salad, popcorn and pizza. Brent himself noted after the show that Florida residents tend to be vastly outnumbered by people from other parts of the country – and the world – in his audience this time of year.

“We get people from all over the world,” he said.

What brought them all to WonderWorks was a family-friendly show that combines fast magic tricks – how exactly does he take a dirty napkin and turn it into an egg? – with plenty of zippy one liners, including the opening when Brent asked the audience not to videotape any portion of the show, but added, “You’re welcome to draw a picture on your napkin.”

As Brent himself noted in the beginning, it’s a very “interactive show.”  He routinely selects members of the audience to get up on stage and help him do his thing – either a magic trick or some more comedy.  There’s plenty of improvising with each show, such as the moment when a man from the audience got on stage and told Brent he was from Indiana. When Brent asked how the weather up there and the man responded that it was cold, Brent added, “Really? Good thing you came to Florida,” to huge laughs.

The members of the audience selected to participate in the show, as it turned out, including Schultz, who had to yell out “I’ve got it, I’ve got it!” while holding a red sack. By the end of the performance, audience members young and old alike were lining up for Brent’s autograph. The high praise included kind words from Schultz, who told Brent “It was such a great show,” and Miller, who added, “Amazing stuff – amazing.”

It was another reminder of why Central Florida remains one of the top tourist destinations in the world – and why people who have already been to the Orlando area many times just keep coming back.

Who is the man who packs them into the WonderWorks show? Brent has been doing the Outta Control Magic Comedy Dinner Show since 2000, and got his start at age 12, when he discovered a passion for both magic tricks and one-liners.

“I had an ad in the local newspaper when I was 12, doing birthday parties,” he said. “I was industrious.”

The native of Holiday, Tenn., relocated to Orlando in 1999, originally to work for Walt Disney World, before gravitating to WonderWorks.

So how do you effectively combine magic and comedy into one show?

“I just know what works for me,” Brent said. “I try to be similar to the movie ‘Shrek,’ that has something for everybody in it.”

That includes double entendres that sometimes fly over the heads of the kids – but the adults laugh out loud.

“The kids don’t always get what I’m doing, but the parents get it,” said Brent, whose show includes skits about hippies, Sonny and Cher and ancient Egypt.

“I try to keep it very fast-paced,” he said. “Most guys drag the tricks out, but here since it’s a dinner show, you’ve got to keep their attention.”

How does he go about selecting people from the audience and figure out who will be an asset on stage?

“I certainly look for people who are smiling and seem to be enjoying the show,” Brent said. “My show is really light-hearted. It’s not a serious magic show. I look at it like a party with magic in it.”

He also makes a point of not trying to embarrass anyone he brings on stage, but to toss them right into the fun.

“I try to do it the way I would want to be treated,” he said.

He also likes to mix it up with the audience, which gives Brent plenty of opportunity to think up new jokes for each performance.

“Every show is different,” he said. “I keep it loose enough so I can improvise.”

Dexter’s remains a local favorite, and for very good reasons.
Need a reason to enjoy the season? Get in your car and drive, my little Elf.

Welcome Center Hosting Back to…