What is that upside down building? Wonder Works rides out a tough economy with new exhibits and a popular dinner show.

Home /Tourism/What is that upside down building? Wonder Works rides out a tough economy with new exhibits and a popular dinner show. 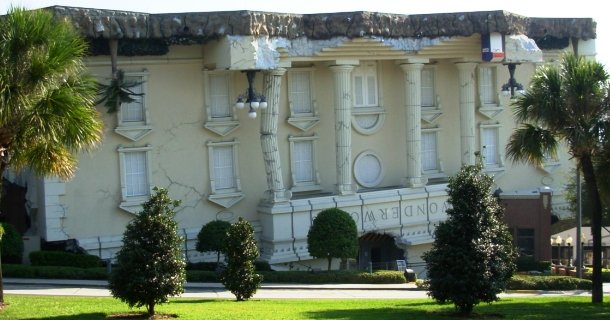 Tourism |
ORLANDO – If you’ve driven past Pointe Orlando, you’ve probably seen it plenty of times and know it as the “upside down” building. But outside of wondering if the property got ripped into the sky by a hurricane before it crashed back onto International Drive, have you ever stepped inside Wonder Works to check out what’s in there?

If you haven’t but are planning to, said Michelle Davis, you’re in for a treat.

“We’ve got over 100 different attractions here,’ said Davis, a sales representative for the attraction at 9067 International Drive.

That’s a lot of exhibits to check out under one roof, although as Davis is quick to note, if you’ve been to Wonder Works before but haven’t returned in a while, consider going back. The Wonder Works team is still adding on new attractions, including a new collision course that allows guests to walk high above the ground, guided only by ropes.

It’s a challenging – and fun – obstacle course that only Wonder Works could come up with, she said.

“We have recently opened the ropes challenge course, and it’s been going great,” Davis said. “We’re the only indoor ropes course in Central Florida.”

Wonder Works has enough exhibits to offer – old and new – that the property impressed the president of the Central Florida Vacation Rental Managers Association when the trade group recently held its monthly meeting there.

“A lot of us are going to be amazed at what goes on in this building,” said David Leather, president of CFVRMA, which represents many of the short term vacation rental homes in Central Florida.

“Hopefully, this will be on your list of places to tell your guests about,” Leather added.

That kind of support could prove enormously beneficial to an attraction like Wonder Works. Vacation homes are one of the fastest growing aspects of the hospitality industry in this region, an appealing alternative for tourists who come here for extended stays with their family. Vacation homes appeal to these families because they offer more space – multiple bedrooms, a fully furnished kitchen, a game room and private pool – than a hotel or motel room does.

Initially popular with British and other European tourists who came to the local theme parks for stays of a month or longer, the popularity of the vacation home has been growing with American tourists as well.

And if vacation home managers let their guests know what Wonder Works has to offer, that could mean more business at a time when the sluggish U.S. economy hasn’t spared the tourism industry. A high unemployment rate nationally and in Florida has meant less disposable income for people going on vacation – assuming they can afford a vacation at all.

“We are actually doing very well,” Nolan said. “We have managed to balance out and run even.”

Why? The diversity of what they offer, combined with competitive pricing, Nolan said.

It doesn’t hurt that Wonder Works is close to the popular Pointe Orlando plaza, and the nearby Orange County Convention Center, which attract both tourists and national and international business travelers.

“We’re within walking distance of the Convention Central and the row of hotels,” Nolan said.

“We’re extremely proud of our dinner show,” Nolan said.  “It’s kind of like a stand up improv. We can accommodate up to 25 guests at one time.”

Wonder Works is also home to more than 100 science-based interactive exhibits, and as Nolan pointed out, they appeal to people regardless of their age.

“It’s fantastic for families,” Nolan said. “It’s geared toward guests of all ages.”

New to Wonder Works this year is the rope collision course.

“It’s three stories of obstacles and challenges,” Nolan said, and it’s also right across from another new exhibit, the 4D Theatre.

“We give you 3D glasses before you go in,” Nolan said. “You go through as if you’re on your own roller coaster.”

Wonder Works also has a Laser Tag Arena, where games are played for seven and a half minutes, and there are tournament and team plays.

Peruvian dancer comes to Orlando and finds her dream: Zumba!
Panic in the Steam Room