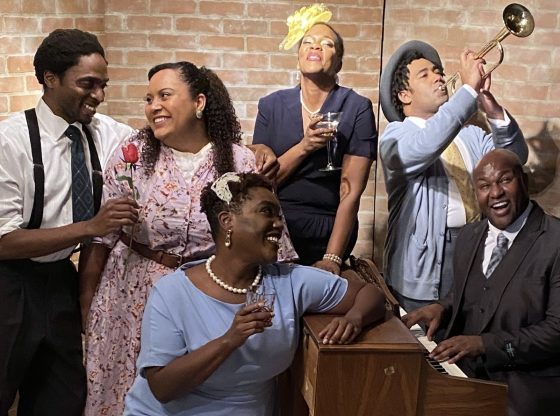 WINTER PARK — At the start of the 1930s, as jazz was becoming more popular, Jazz musicians were heading en mass to New York City, which was quickly becoming the focal point of musical entertainment. It was the Harlem neighborhood that was the center of early New York Jazz, with its famous Cotton Club that had opened in 1927.

One of the great themes of music has and always will be about the pursuit of love, the complexity of relationships, how challenging it seems to get the one you truly want. One of the greatest strengths of the musical Trav’lin: A 1930’s Harlem Musical Romance, is the way it pays tribute to Harlem’s role in music during the 1930s — and on the way love in the 1930s revolved around the same complex issues that we all face today.

This terrific musical, which opened on Friday at the Winter Park Playhouse, will be performed through Feb. 19, and let me tell you, if it’s cold outside, this sizzling good production will heat you up fast.

Trav’lin was created by Gary Holmes and Allan Shapiro (who attended Saturday’s matinee performance at the Playhouse), and was launched in October 2010 when it was fully staged at the New York Musical Theatre Festival.  It tells the story of three couples and their frustrations with love, centered around George, who considers himself the unofficial mayor of their neighborhood and seems to have his toes dipped into everybody’s affairs. That includes his niece Ella, who is sweet on aspiring Bible salesman Nelson, and Roz, the local hair stylist who is constantly raging about how her man Archie always seems to have his eye on another woman.

George, being the guiding force in the neighborhood, is intrigued when he spots a woman he doesn’t recognize who has arrived in Harlem with her suitcase. He’s eager to welcome her in and get her involved in the activities of their local church … and something seems oddly familiar about her. The woman, who claims they have never met, brings a secret to Harlem, which adds considerably to the show’s fun.

Light and sassy, with some beautifully written songs and key comedic segments, is one of the best productions the Playhouse has done in a while. The scenes between George and mystery woman Billie are among the show’s most intriguing Boisterous, outspoken, a born leader, George can’t help diving head first into what everyone is doing; once he discovers that Billie is a fabulous cook, he helps her set up her own shop. Quiet and reserved at first, Billie seems to be getting carried along by this assertive man. But don’t be fooled. Billie is a lot smarter that she lets on, and she’s keeping her cards close to her vest for a reason.

There are also some marvelous scenes between Billie and Roz, who understand how difficult it can be navigating this thing called a Man, and their scenes together in Roz’s salon sharing insights with the younger and more impressionable Ella are a real treat. A key reason this show works so well is that every character is so instantly likable, warts and all. You may be far less inclined to choose sides in this battle of the sexes and instead relax and enjoy the ride.

Equally impressive is a superb cast that provides the energy and enthusiasm that makes the show sparkle. Johnathan Lee Iverson is spectacular as George, the towering figure in his Harlem area who finds himself getting cut down to size a peg or two before the end, which ends up making him even more likable as he discovers his inner humility.

Patrece Bloomfield as BIllie and Faith Boles as Roz have a magical way with a snappy quip or a wise assumption that every woman knows, and they’re a pure delight to watch. Dayja Le’Chelle as Ella, Rolin Alexis as the wily con man Archie and Will Scott as the naive young Nelson round out a superlative cast of pros, and it doesn’t hurt that this musical has some truly memorable songs by J.C. Johnson to keep us captivated.

Be sure to catch Trav’lin before it heads on the road. Ticket prices are $46 evenings, $43 senior evenings, $39 matinees, $22 preview performances, $20 students and theatrical industry professionals. Group discount rates for 10 people or more are available. Student rush “$10@10” offers $10 tickets (for students 25 years and younger) 10 minutes prior to a performance when seats are available.  All patrons must wear masks during the performance.

To buy tickets, call the box office at 407-645-0145 or visit online at  www.winterparkplayhouse.org

The “It’s a Wonderful Life” revival: A Biden Era Movie
Escapism at its best at The Marvelous Wonderettes Dream On