Tragic Life of Anne Frank Revisited in “Let Me Be Myself” 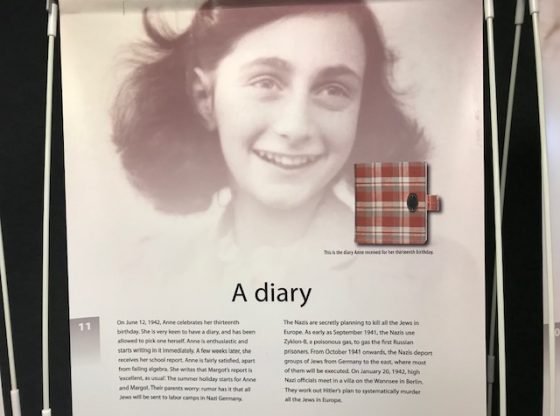 MAITLAND — The black and white video shows an urban street somewhere in Europe. It’s the early 1940s, and a young girl with dark hair peeks out at what’s happening in the street.

Despite millions of copies of her book being published around the world and photos of the author on the cover, it might be hard at first to recognize that the young girl, seen quite briefly in that home movie, is one whose name instantly recognizable: Anne Frank.

“These are the only moving images of Anne Frank,” a note next to the video states. “In 1941, she was filmed by chance when the neighbor’s daughter got married.”

That video and an actual copy of the diary that Anne Frank used to recorded her inner thoughts while in hiding from the Nazis is a part of the exhibit “Let Me Be Myself,” now at the Holocaust Memorial Resource & Education Center in Maitland.  Insightful and often deeply despairing, the exhibit looks at the life of one child living in Germany during the Holocaust who was never allowed to reach maturity.

What is the Exhibit Let Me be Myself? 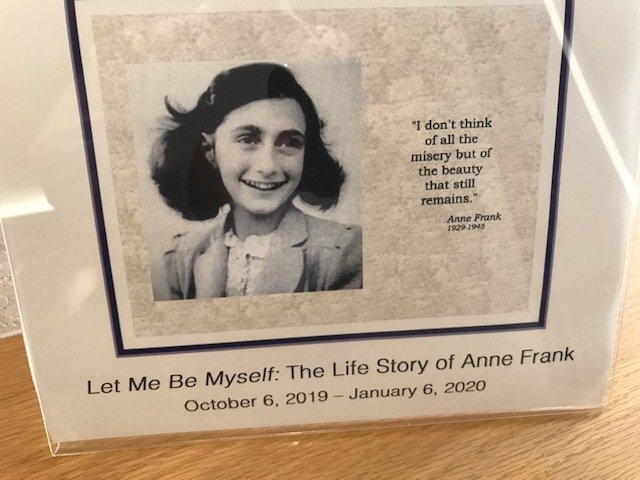 “Let Me Be Myself – The Life Story of Anne Frank” had its world premiere in 2015 in Canberra, Australia and has since been on display in several countries worldwide. The exhibition from the Anne Frank House in Amsterdam presents  Anne’s life from her birth in 1929 to her death in the atrocious Bergen-Belsen concentration camp in 1945 at age 15.

It follows a story that’s well-known thanks to the publication of Anne’s diary, movie versions like “The Diary Of Anne Frank” (1959) and theatrical productions as well.  The exhibit focuses on Anne’s relationship to her family, and also how her personal life is placed into the historical context of Hitler’s rise to power, World War II and the persecution of the Jews in the Final Solution.

Born on June 12, 1929, to a Jewish German family in Frankfort, Anne was delivered just four years before Hitler was able to seize power in Germany. From the start, her life was threatened by the fierce anti-Semitism that marked Hitler and his Nazi Party. As the exhibit notes, there were no other characteristics about Anne Frank or anyone in her family that was significant to the Nazis other than their faith.

“To the Nazis, Anne Frank was just Jewish. They used their racial laws to determine who was Jewish and therefore denied the right to live,” the exhibit’s liner notes state. “Adolf Hitler, the party leader, and his followers blame the Jews in Germany for all the problems, such as a high unemployment rate and losing the first world war.  Once the Jews have left Germany, all problems will be solved, according to the Nazis.”

How Did Anne Frank’s Family Respond to the Crisis?

As the exhibition points out, Anne’s father Otto Frank was fully aware of the enormous danger he and other Jews in Germany were facing. Hitler came to power in the summer of 1933, and their worst fears were confirmed on Nov. 9-10 1938, when the Nazi Party encouraged the German public to rise up and participate in a horrific pogrom against the Jews, attacking Jewish-owned businesses and burning synagogues to the ground, in what became known as Kristallnacht.  It was a night when more than 1,400 synagogues were set on fire, thousands of Jewish shops were destroyed, and more than 100 Jewish citizens were killed.

For the Frank family, this was also a devastating event because Anne’s uncle Walter was arrested and sent to a concentration camp during Kristallnacht.  Anne’s parents Otto and Edith understood then how dangerous it was to remain in Germany, so they decided to move the family to the Netherlands. But then in September 1939, Germany invaded Poland, launching World War 2, and it became clear that Hitler’s ambitions extended well beyond simply conquering the Poles.

“Otto and Edith wonder whether the Netherlands will stay neutral. For how long will they be safe in Amsterdam,” the exhibit notes.

Their fears were confirmed on May 10, 1940, when German soldiers crossed the Dutch border and the Netherlands quickly became an occupied country — and one where Jewish residents were in as much danger as they had been in Germany. That’s when Otto arranged to have his family go into hiding in the attic of the building where he worked.

The focus of this exhibit is not on covering what life was like for the Frank family as they hid in that attic for two years — a story that’s already been documented in the dramatic movie and theater productions about Anne’s life.  But it does point out that “On June 12, 1942, Anne celebrates her 13th birthday. She is very keen to have a diary and has been allowed to pick one herself. Anne is enthusiastic and starts writing in it immediately.”

While most dramatic retellings of Anne’s Frank’s story end as her diary did, on the day the Nazis found the family in hiding, this exhibition continues to the appalling and horrific details of the family being sent to the Auschwitz concentration camp in Poland. Then, as the Red Army advanced on Poland, the Germans decided to move many of the Auschwitz prisoners to the Bergen-Belson concentration camp in Germany, where Anne and her sister Margot were sent to appalling conditions.

Where Can You See This Exhibit?

Let Me Be Myself also includes stories from young people today about fighting prejudice and injustice, and as the Holocaust Memorial Center notes, “Through the story of Anne Frank, visitors are encouraged to consider the effects of prejudice, discrimination, hatred, and violence.”

The exhibition recounts modern stories about discrimination and exclusion, “giving the voice to today’s youth from various backgrounds and with diverse identities,” the Holocaust Center notes. “Through photos and interviews, visitors view how these young people see themselves, how they are viewed by society and what role prejudices play in their daily lives.”

The Holocaust Memorial Resource & Education Center is at 851 N. Maitland Ave. in Maitland. Call 407-628-0555 for more details on their hours of operation. The exhibition, which is free and open to the public, will be on display now through Jan. 4 2020.