The Winter Park Playhouse Honors Old Hollywood in “What A Glorious Feeling!: 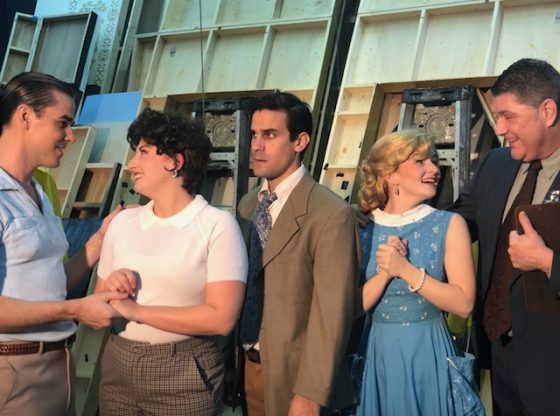 WINTER PARK — On Feb. 21, a legendary chapter in old Hollywood came to an end with the passing of film director Stanley Donen at age 94. While he had directed comedies, thrillers and dramas, Donen was best known for his classic movie musicals, and two in particular: Seven Brides For Seven Brothers in 1954, and two years earlier, the immortal Singin’ In the Rain with Gene Kelly.

While some of Donen’s musical films like Damn Yankees started out as Broadway hits, Singin’ In The Rain was an original musical that paid tribute to Hollywood’s silent era. Today it’s considered one of the greatest films of all time, a reminder that it isn’t just Broadway that knows how to create musicals for the ages.

Singin’ in the Rain, directed and choreographed by Kelly and Donen, it’s still loved today and admired for those amazing dance numbers by Kelly, Donald O’Connor, and Debbie Reynolds, as well as the superb mix of comedy, romance and movie magic in this lighthearted look at Hollywood in the late 1920s, as three stars get caught up in the transition from silent films to “talkies.”

If Hollywood spent decades paying tribute to musicals that started as Broadway productions, it’s also common to find playwrights and theater directors who adopt movie musicals for the stage. And knowing just how beloved Singin’ In The Rain is to generations of movie fans, it’s not hard to figure out why playwright Jay Berkow created the show “What A Glorious Feeling: The Story Of Singin’ In The Rain,” which honors the movie by exploring how it initially got created.

“What A Glorious Feeling!” is making its debut at The Winter Park Playhouse, and a terrific cast helps bring to life the creativity, heartache and exhilaration that went into the long, bumpy road that eventually produced a cinematic treasure.

What Is This Musical About?

“What A Glorious Feeling!,” which runs now through April 13, explores the decision by Kelly and Donen to create a musical about the early days of Hollywood. Armed with an original script, a very young and fresh Donen and an aging, sometimes sickly Kelly remain firmly committed to making this movie to be called Singin’ In The Rain. They have the support of Hollywood film producer Arthur Freed, but it’s anything but a smooth road.

For one thing, the film is being made at Metro-Goldwyn-Mayer Studios, which has been taken over producer/director Dore Schary, who replaced the recently fired Louis B. Mayer. While Mayer favored splashy and fun entertainment, Schary had a preference for darker “message pictures,” and Freed worries that the studio’s commitment to movie musicals may be on the wane.

That’s not the only complication. Kelly is determined to use Jeanne Coyne as his assistant — but she’s Donen’s ex, and let’s just say the tension between the three gets thick at times. And then there’s Kelly’s health — the loud, nagging couch that he writes off as being just a cold, but which the others worry may be a sign of something far more serious. There’s more than a few times when it looks like Singin’ In The Rain might not get made.

And yet, as we all know, it did. And one of the best scenes in this stage production comes when Donen, Freed and the others gather to watch the dailies from the previous day’s shoot, and what they watch is one of the movie’s most iconic scenes, Kelly’s “Singin’ in the Rain” sequence (which is also the opening scene of The Great Movie Ride at Disney’s Hollywood Studios here in Orlando.) Suddenly you feel like you’re transported back to that movie, and loving it all over again.

Why Does What A Glorious Feeling Work?

Berkow’s play works so well because while the movie production had lots of problems, the musical devotes more time to exploring the friendship and mutual respect between Donen and Kelly. In fact, even though Kelly had been making films for decades before Donen, he knew this movie couldn’t be made without the creative input of the aspiring director.

And while the love triangle is a focal part of the show, the witty dialogue between all the characters and their snappy repartee turns “What A Glorious Feeling” into exactly what the movie became: part comedy and part romance, all brought together with some amazing songs, including “Make ‘Em Laugh,” “Good Mornin’,” “Broadway Melody,” and, of course, “Singin’ in The Rain’.”

And just like in the movie, we get one truly memorable cast in this one.

Charles Logan as Gene Kelly and Adam Biner as Stanley Donen have a fantastic chemistry together — you instantly feel like these two men have known one another for years and have a unique way of communicating with one another. Logan creates Kelly as a classic optimist who refuses to stop believing in his movie, while Biner is superb as the hyperactive Donen, rattling off dialogue at lightning speed, then reverting back to an almost childlike state when his ex-wife comes into the picture and he’s not emotionally prepared for it.

Tay Anderson does a fine job as Jeanne, torn between her lingering feelings for Donen and emerging ones for Kelly, while Todd Allen Long is equally good as Freed, the often befuddled producer who has to keep everything smooth and steady, and yet a firm believer that this picture will get made — and will be great!

And Jennafer Newberry really steals some scenes in her hilarious role as a young Debbie Reynolds, given the chance to make a musical with legends Gene Kelly and Donald O’Connor — only Debbie is convinced that she’s not up to the dance moves required of her and keeps wanting to quit before she humiliates herself on screen. (It doesn’t help that Kelly and Donen don’t mind critiquing her tap dancing, either.) Newberry is a virtual non-stop laugh machine, zipping out lines like “I took my bloody feet to my doctor and he wanted to know if it was a musical about the Inquisition.”

These excellent performers, along with the reliably creative direction and choreography by Playhouse Artistic Director Roy Alan and the musical accompaniment by Music Director Christopher Leavy, provides a really winning show that amply demonstrates that while Hollywood could create movie magic, there’s plenty of stage magic to go around as well.

How Do I See This Show? 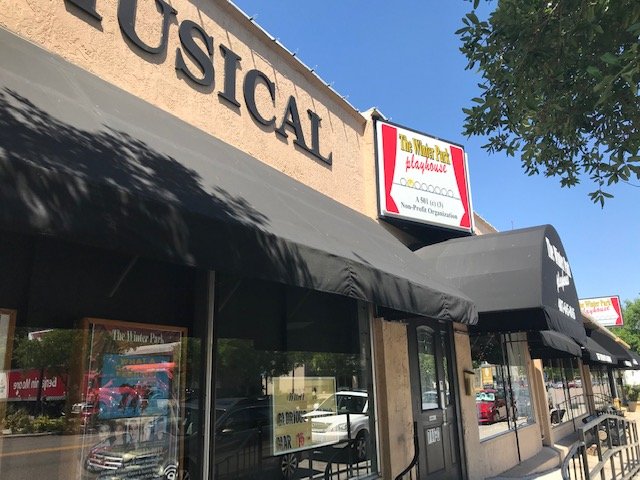 Mad Cow Theatre Gears Up for its Black & White Bash
Roman Polanski’s Based On A True Story is a Dark, Expert Thriller