The Legend Of Sleepy Hollow is Delightfully Funny and Scary

ORLANDO — Our narrator, a school teacher in a one room school house in the 1820s, is none too pleased with the quality of his students. That’s especially true of their history assignments, which are filled with so many errors that it’s now painfully obvious our teacher isn’t particularly effective at getting his lessons across.

Still, it’s now October. The days are getting shorter, the warmth of summer has disappeared in their upstate New York village called Sleepy Hollow, and our teacher decides to spend the rest of the school hour doing something different: telling his students about a story that’s been passed down over the years, about his predecessor, a trim and meek instructor named Ichabod Crane, and how he disappeared one October evening while riding home from a local party.

Ichabod seemed to have mysteriously vanished after crossing a bridge adjacent to a burial ground. Ichabod’s story, our narrator points out, has always been attached to a legend in those parts, of Ichabod’s encounter with a terrifying Headless Horseman.

The Orlando Repertory Theatre, the city’s home for first-rate children’s theater, has opened its fall season with a terrific version of Washington Irving’s classic short story, The Legend of Sleepy Hollow, which runs now through, appropriately enough, Oct. 31. Adapted for the stage by Derek G. Martin and Jesse M. Sullivan, the production gives us a sensational performance by Stephen Pugh as our narrator and, as he jumps into the story, all the main characters, including Ichabod, his love interest Katrina Van Tassel, and his chief rival, the bawdy and rowdy Brom Bones. The production, totally faithful to the Washington Irving story, is quite funny and, by the end, very scary — an unbeatable combination.

How Was The Legend Of Sleepy Hollow Adapted For The Stage? 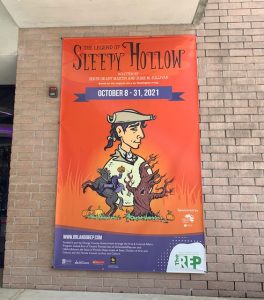 The Orlando Rep’s set consists of our narrator’s classroom with his desk and the rows of student desks, but significantly it also includes a background setting designed to evoke the wooded areas around the village of Sleepy Hollow. That backdrop will play a significant part in the show’s triumphant finale.

Our narrator sets the scene for us, describing how the awkward Ichabod, with his thin face and giant ears, delighted in threatening his students with firm discipline — unless, of course, their mothers were planning to make a delicious meal for dinner that night, and there was a place at the dinner table for Ichabod.

Ichabod becomes smitten with the lovely Katrina, but as the sole child of the town’s wealthiest farmer, she’s a highly desirable catch, and her suitors include Brom Bones. During a harvest party at Katrina’s home, Brom gets the clever idea to tell everyone the story of how he was riding home one evening after dark when he was chased by a demonic Headless Horseman, and barely escaped with his life after racing across that bridge. The story has the effect of sending chills down poor Ichabod’s spine, and as he leaves the party and heads home on his temperamental horse Gunpowder, Ichabod keeps looking nervously over his shoulder on that dark night.

And then he starts hearing someone call out his name  in the darkness ….

And the terror begins.

Does This Production Manage to be Scary?

Unlike horror movies, where every available special effect is there at the director’s disposal to visually assault the viewer into a state of anxiety and terror, horror theater is more challenging, because it still requires the audience to use their imagination. But horror theater can certainly be done, and this production is a first rate example of that.

The director, Tara Kromer, uses sound effects, lighting and visuals projected against the backdrop to build up the intensity of Ichabod’s final journey, and it all comes together quite effectively. It helps that Pugh’s performance couldn’t possibly be improved on: his Ichabod is suitably gawky, his Katrina flirtatious and coquettish, and his Brom something of a lunkhead, but one who knows that deep down inside, Ichabod is an easy target. He expertly transforms into multiple characters and has a great deal of fun doing so.

At the same time, his final ride through that dark forest — which includes an actual appearance by the Headless Horseman, complete with a fiery pumpkin in his hand — helps send a grand chill through the audience. It’s a wonderful show for the Halloween season.

The Legend Of Sleepy Hollow is being performed now through Halloween at the theater at 1001 E. Princeton St. in Loch Haven Park. The show, which runs for 55 minutes, is being performed on Saturdays and Sundays, both 2 p.m. matinees and 5:30 p.m. evening shows.