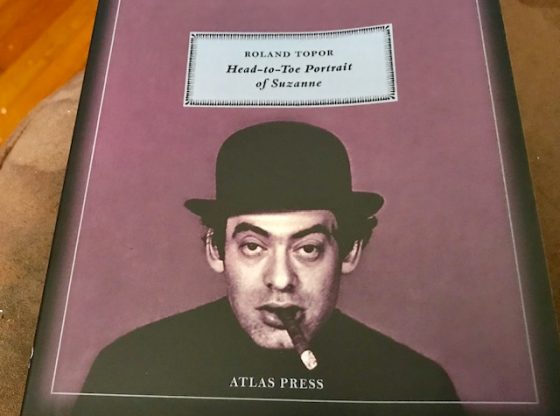 ORLANDO — Jan. 7 marks a special anniversary, particularly if — like me — you’re a fan of surrealist horror fiction. It was on Jan. 7 1938 when the French writer and artist Roland Topor was born in Paris.

Topor, who died at the far too young age of 59 on April 17 1997, was a fascinating artist. His first novel, “Le Locataire Chimerique,” a work of horror fiction, inspired everything from the 1976 Roman Polanski movie “The Tenant” to a ballet featuring dancer James Whiteside in November at The Joyce Theater in Manhattan.

He was also an artist who staged plenty of exhibitions around the world, and an actor who had roles in films like Werner Herzog’s “Nosferatu The Vampire” and the Italian comedy “Ratataplan.”

But the one other thing that distinguished Topor for a very long time is that he wrote dozens and dozens of books in his day — but only five got translated into English-language versions. In addition to “The Tenant,” the others were “Joko’s Anniversary,” a collection of short stories called “Stories And Drawings,” his comedic play “Leonardo Was Right,” and his collection of things people say during lovemaking, “A Pillow Talk.”

That last book was translated from the French novel “Je t’aime” in 1999, just two years after Topor’s death, and it marked the last time one of his French books was made available to English-speaking audiences.

“The works of the French author and artist Roland Topor … are currently undergoing a reassessment in his homeland,” notes the back cover of the new book issued by Atlas Press, London. “Major exhibitions have been mounted and all his books are being brought back into print. This is the first of them to be translated into English.”

The book that Atlas chose to publish (with translation and an introduction by Andrew Hodgson) is the French novel “Portrait En Pied De Suzanne,” first published in 1978 and now being released for the first time in English as “Head-to-Toe Portrait of Suzanne.” Surreal, bizarre, comical and often horrific, the book is pure, unadulterated Topor, and the ideal choice for reintroducing his savage writing to American and British audiences.

Who Was Roland Topor?

Topor’s earlier novels offered a unique mix of surrealism, horror and black comedy. Sometimes the book (The Tenant) seemed to be a horror novel with surreal and comedic moments; other times (Joko’s Anniversary), it felt like a pitch black comedy and social allegory with elements of intense horror. Either way, as you’re reading one of his novels, you’re just as likely to laugh as wince or feel petrified.

As Hodgson notes in his introduction, Topor’s work seems highly influenced by a childhood that was anything but idyllic. Born the son of a Jewish Polish artist, Abram Topor, the family arrived in Paris just before the Nazi invasion in 1940 and the establishment of the puppet Vichy government that complied with Hitler’s demands for the “Final Solution” to the “Jewish problem.” It was fellow residents, including their own landlady, who denounced the Topor family as Jewish, forcing Roland’s father to go into hiding and the children to be sent away outside of Paris. As Hodgson notes, Roland spent the war years being raised as a Catholic under a false name in Savoy.

A terrifying childhood, no question, and as Hodgson points out, “Topor’s writing constantly returns to the fever dream of surviving the Holocaust, in which the everyday banality of greeting the landlady on the stairs and a continent-wide genocide flit about one another like flies above a corpse.”

And while Topor sometimes seemed to deeply offend the critics (especially “Leonardo Was Right,” a very bad taste comedy about a group of people in a country home with a broken toilet), he continued writing in his distinctive style, perhaps expecting to eventually connect with a wider audience that shared his approach to fiction.

In the case of “The Tenant,” he clearly succeeded; the book got strong early reviews, the Polanski film is now considered one of the director’s best works, and the Whiteside ballet version also received positive feedback.

And in some ways, “Head-to-Toe Portrait of Suzanne” feels a bit like a continuation of that story.

What is the Suzanne Novel About?

“The Tenant” was about a young man, Trelkovsky, who moves into a new apartment made vacant after the previous occupant killed herself by jumping out the window. Trelkovsky soon finds the atmosphere in that building to be agonizingly hostile; his landlord, the concierge and other neighbors constantly complain that he makes too much noise. He eventually comes to believe that the neighbors may have conspired to kill the previous tenant by forcing her to commit suicide, and are now trying to do the same thing to him. The novel walks a fine line: you’re never quite sure if it’s about paranoia and insanity, or persecution in the same manner as the Holocaust.

“Head-to-Toe Portrait of Suzanne” is narrated by another sorry and aggrieved loner, who finds himself hating the city he lives in. Everyone speaks a different language, nobody is friendly, and he feels isolated and thoroughly miserable. In addition, the narrator displays enormous contempt for his own body; he’s overweight, can’t resist eating indulgently, and hates the site of himself in a mirror. It’s not a pleasant existence.

His abysmal life doesn’t change until he’s reunited with Suzanne, the true love of his life, a woman he believes has always been his perfect mate ….

But wait. This is a Topor novel, after all, and not everything is at it seems.

For one thing, there are questions about where our narrator is. Is he living in an apartment in the city? Is he being treated in a hospital (at one point in the book, he badly injures his foot, which bleeds profusely and gets infected)? Is he confined to a mental intuition of some sort? It’s not clear if our narrator resides at one, several or all three of these locations at various points in the book. There’s a considerable amount of doubt about the “reality” he’s describing to us, and whether he’s a “reliable narrator” to begin with.

As I said, welcome to the surreal, eccentric, zany, unconventional and lunatic world of Roland Topor. If you like your novels “straight,” this isn’t the book for you.

But like all mad and talented surrealists, Topor wrote adventurous novels that challenged us to keep reading, even to question what we’re absorbing. And as this short novel (just 86 pages) reaches its cruel and torturous final scene, where an increasingly bitter narrator decides to punish the wayward Suzanne, it follows Topor’s predilection for harrowingly nihilistic endings.

If you’re familiar with Topor’s output — “The Tenant” as novel or film, or the animated 1973 movie “Fantastic Planet,” for example — you’re likely to find “Head-to-Toe Portrait of Suzanne” fits perfectly into his overall body of work. Topor often wrote about social outcasts in a hostile society, making their daily existence seem both funny — and grueling. This book is no exception.

On Monday, as we celebrate Roland Topor’s birthday, be sure to order a copy of “Head-to-Toe Portrait of Suzanne,” particularly if you’re a fan of his overall work. And if you’re new to Topor, it’s a bold and fascinating introduction to his often harsh and hilarious world.

And let’s hope more of his French novels are happily headed for English translations, and soon.