The Joint is Hopping as Ain’t Misbehavin’ Sizzles With Talent 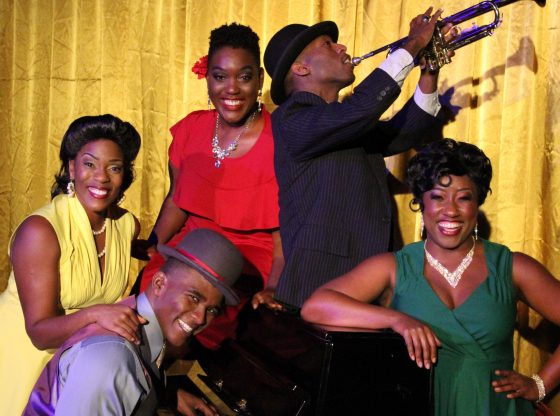 WINTER PARK — On Feb. 16, 1923, a record was released called “Down Hearted Blues,” marking the first song recorded by Bessie Smith, who would become the famed Empress of the Blues, making records that incorporated commentary on a host of issues impacting the African American community. She became a towering figure in the Blues, Jazz and the Swing Era, and helped set the standard for the Blues in recordings like “Tain’t Nobody’s Business If I Do” and “Gimme a Pigfoot.”

I thought about Smith while watching the production of the Tony Award-winning musical “Ain’t Misbehavin’,” a revue that pays loving tribute to the Harlem Renaissance in the 1920s and ’30s.

Now being performed at The Winter Park Playhouse, this production has energy to spare as the five cast members go through more than 30 songs from that era, many of them by the great Fats Waller, effectively whisking us back into the nightclub scene of a different era.

What is Ain’t MisBehavin’ About?

Ain’t Misbehavin’ opened in the Manhattan Theatre Club on Feb. 8, 1978 (with a cast that included Irene Cara and Nell Carter). Created by Murray Horwitz and Richard Maltby, Jr., it harkens back to the black musicians who became an integral part of the Harlem Renaissance, when Manhattan nightclubs like the Cotton Club attracted huge crowds.

But far from simply being just a nostalgia piece, the Playhouse’s production is particularly entertaining because the performers — and the well-chosen songs from the era — are sassy and offer plenty of attitude. That’s part of what made me think about the legendary Bessie Smith while watching the show. Through her songs like “Empty Bed Blues,” “I Ain’t Gonna Play No Second Fiddle” and Young Woman’s Blues,” Smith explored the then-taboo subject of women’s sexuality — from a fiercely independent, even defiant voice.

The same is true with so many of the songs in Ain’t Misbehavin’. While the music (superbly performed by the resident Playhouse Music Director Christopher Leavy, who heads up a six-piece band) is upbeat, catchy, and constantly toe-tapping, the lyrics explore some powerful emotions in songs like “I Can’t Give You Anything But Love” and “I’ve Got a Feeling I’m Falling.”

The production also scores a bulls eye with the direction and choreography by the Playhouse’s artistic director, Roy Alan, who brings a considerable amount of humor to many of the scenes. You truly will feel like you’ve been transported back to a place like the Cotton Club, where the entertainers are determined to provide as dynamic and vibrant a show as possible.

What Does The Cast Bring to the Show?

In retrospect, the production’s success seems to have been guaranteed once the casting was complete. The four Playhouse newcomers here — Patrece Bloomfield, Faith Boles, Meka King and Shonn McCloud — join Playhouse veteran Deejay Young to deliver two delightful hours that showcase their considerable gift for singing, comedic cadences, and truly zestful dance moves. There are more than a few moments in this show when you’re going to say to yourself, “Whew!” when the song ends.

Young has some of the show’s highlight numbers, including “The Viper’s Drag,” a jazzy Waller tune that explores the wink-wink notion that “If your throat gets dry, you know you’re high, everything is dandy … Truck on down to the candy store.” He’s equally good in “The Reefer Song,” particularly in his interactions with the audience, as he dangles his own little rolled reefer with the tease “You can’t have it.”

Young and McCloud also have a rollicking good time performing “Fat & Greasy,” where they crack jokes about a man who is “too darn lazy to reach down and tie his shoe.” In a similar vein, McCloud is a riot performing “Your Feet’s Too Big,” another song that employs snappy insults in a deliciously comical way.

The actresses are absolutely stunning vocalists, and all three are terrific, a real joy to watch; every nuance of their expressions, attitude and gestures — even small ones — are thrilling to behold. Boles has some of the funniest moments, and King and Bloomfield give us some truly heartfelt renditions of songs like “That Ain’t Right” and “Keepin’ Out of Mischief Now.” The entire cast clicks from the opening song and performs beautifully together, and they had the audience on their feet by the end — a reaction that was well deserved.

And as you’re watching this production, listen closely to those lyrics. There’s sadness, frustration, and pain reflected in some of the songs; but there’s also joy, excitement and passion in others. If the Playhouse production of Ain’t Misbehavin’ accomplishes anything, it’s to remind us of how those early swing and blues era singers and songwriters knew how to connect with the emotions of their audience.

This production was sponsored in part by a grant from Duke Energy through United Arts of Central Florida, Orange County Government through the Arts and Cultural Affairs Program and the Winter Park Community Redevelopment Agency.

The Coop, the southern cooking restaurant at 610 W. Morse Boulevard, is the featured restaurant partner for this production, offering 10% off the food portion of your bill through Feb. 28 if you show them your Playhouse theatre ticket.

For reservations or information, call the box office at 407-645-0145 or visit the Playhouse online.

MLS: A Growing Trend to Help You Save When Handling Online Real Estate
The African American History in Central Florida, Via Art