The Book Of Merman Unites Ethel, Mormons, and Great Fun 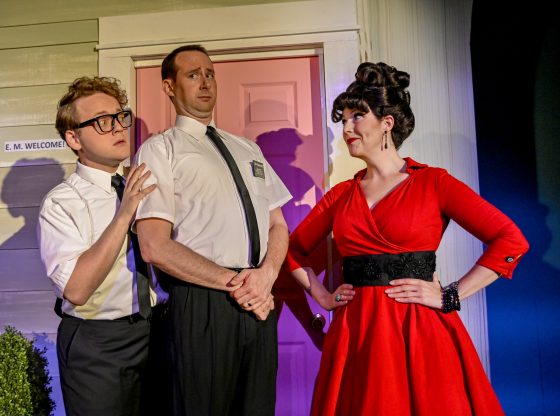 WINTER PARK — Elder Braithwaite and Elder Shumway, two Mormon boys sent out to Los Angeles to recruit souls, are having more luck getting doors slammed in their faces than winning converts. Braithwaite, the more optimistic of the two, isn’t discouraged because he feels like he’s on a grand mission. Shumway, who finds Salt Lake City to be a bore and their mission to be tedious, is less enamored with missionary work.

Then their luck changes in Shumway’s eyes when they knock on another door, and the woman who answers looks — and sounds — intriguingly familiar. Assuming they’re college kids selling magazine subscriptions, the woman welcomes them into her home, where there’s a nicely decorated Christmas tree in the corner. As the woman grabs her checkbook to buy one of their subscriptions, that’s when Shumway notices the name on the check and realizes that as a showbiz fan, he’s hit the jackpot. The name on the checks is Ethel Merman.

You mean — that Ethel Merman?

Braithwaite is confused, because he’s never heard of this Ethel Merman. Shumway is confused, too, because it’s 2021 and he thought Ethel Merman had passed away in 1984. But the mysterious lady confirms it for them: yes, her name is Ethel Merman, and when she starts to sing, Shumway knows this is the real thing and he’s struck celebrity gold.

That’s the clever premise to The Book Of Merman, the musical comedy by Leo Schwartz and D.C. Cathro that has a grand old time spoofing divas, celebrities, showbiz dreams, and of course the hit musical The Book Of Mormon. If you’ve seen that Trey Parker/Matt Stone bad taste extravaganza, I can tell you this one is considerably less raunchy and far more playful, less eager to offend and more eager to have some silly fun. It also has a showstopper number — of all things, a disco song performed by the three cast members, “Ethel’s Big Comeback,” that’s a pure riot.

Where Is The Book Of Merman Playing? 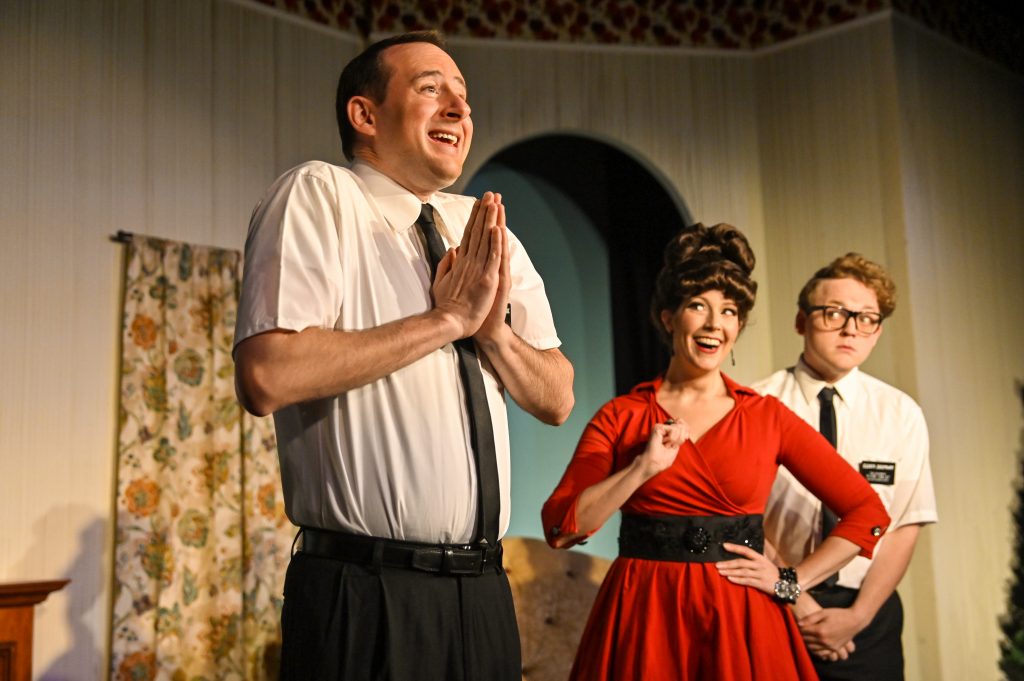 Originally produced Off-Broadway, The Book Of Merman made its Central Florida debut on Friday at The Winter Park Playhouse,  where director Roy Alan expertly choreographed his three terrific performers — Laura Hodos as Ethel, Michael Scott Ross as Braithwaite and Wesley Slade as Shumway, who balance the play’s zany humor with some soaring vocals. Light and consistently enjoyable, the musical’s clever set up is particularly intriguing.

Shumway is right, of course, that the legendary Ethel Merman left us in 1984, so who is this woman conversing with the two missionaries, who walks, talks, acts and sings just like the Broadway diva? Is she an imposter … or the ghost of Ethel come back for a showstopping encore? Have the boys walked into some kind of comedic Twilight Zone-esque place where Ethel lives on, eager to belt out “There’s No Business Like Show Business” one more time?

But Ethel’s true identity is only one aspect of the show and its appeal. Our two missionaries couldn’t be more different. Braithwaite is genuinely committed to the mission of the Mormon Church and eager to enlighten people about seeking salvation under the glory of God. Shumway, on the other hand, jumps at every opportunity to sing and dance with Ethel, finally acknowledging that he’s long nursed dreams of being up on stage, performing for large crowds. He’s a show biz boy at heart!

But if the two lads seem pretty cut and dried at that point, well … let’s just say Ethel isn’t the only one with some ambiguities. Braithwaite, for example, is harboring a secret that he really, really doesn’t want Shumway to know about. Two guesses whether Shumway eventually figures it out.

Is The Book Of Merman Worth Seeing?

The play ultimately has a thing or two to say about being true to your own dreams, and to who you really are — a lessen all three take to heart by the end of the show, when the very sweet and charming song “Because Of You” becomes their new theme. For most of its hour and 45 minute running time, the play is as light as a freshly baked Apple Spice Cupcake — and if you have a sweet tooth, you know how tasty that can be.

Our three performers couldn’t have been better chosen. Ross nicely balances Braithwaite’s naive devotion to duty and cringe-inducing rejection of star culture with inner vulnerabilities that slowly emerge — including his own unique ambitions in life. He starts off very silly, but becomes a lot more interesting as the show goes on.

Slade is brassy, blaring, high energy and over the top in love with the idea of jumping into the celeb world, and you can easily see his Shumway having his own diva potential down the road.

And Hodos — wow, I give her quite a bit of credit, because her Ethel Merman felt so spot on, from capturing her familiar powerful singing voice to the snappy one liners she tosses out at the boys when they first arrive. If you’re an Ethel Merman fan, you’ve got to see this one, just to appreciate what a truly loving tribute Hodos’ performance is.

Ticket prices are $45 for evening shows, $42 for senior evenings, $36 for matinees, and  $20 for students and theatrical industry professionals. Group discount rates for 10 people or more are available. Student rush “$10@10” offers $10 tickets (for students 25 years and younger) 10 minutes prior to a performance when seats are available. All patrons will be required to wear masks during the performance.