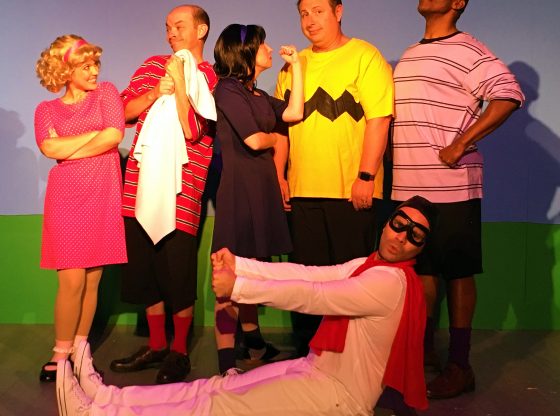 WINTER PARK — Peanuts, the syndicated comic strip by Charles M. Schulz, has remained among the most popular and influential in the history of comic strips ever since its debut in October 1950, and with good reason: among that familiar Peanuts gang, there’s likely to be one of the kids that you instantly empathize with, and maybe feel like they’re capturing your own childhood perfectly.

Peanuts was popular enough to inspire some animated TV movies and then, in 1967, a stage musical, You’re A Good Man, Charlie Brown, with music and lyrics by Clark Gesner, based on Schulz’s characters. While it’s become a popular choice for amateur theatre and high school productions — particularly since it has just six characters and a very simple setting — the musical has also found its way to Broadway productions and recently had a 2016 Off-Broadway revival. In Charlie Brown, we have a character who always seems to get the short end of the stick, but keeps us charmed and entertained because he never gives up. He just keeps picking himself up, dusting himself off, and charging forward.

The good humor of Gesner’s show, and the enduring appeal of Schulz’s classic characters makes You’re A Good Man, Charlie Brown an ideal choice for a holiday production, which may be why the Winter Park Playhouse chose to stage the Broadway revival version of the hit musical. The Playhouse’s production, which opened on Friday, runs through Dec. 15.

What Was The Broadway Revival Of Charlie Brown?

The Playhouse production, directed by their artistic director Roy Alan, is a production that features additional music and lyrics by Andrew Lippa and additional dialogue by Michael Mayer. This is the 1999 Broadway revival version of the original 1967 show, which won Kristin Chenoweth the Tony award for Best Featured Actress in a Musical for her role as Sally Brown.

The play is made up of a series of short vignettes, which include Charlie Brown struggling to decide if he should try to spend lunch with a cute red-haired girl, Lucy opening her psychiatrist stand for Charlie Brown, Sally determined to get her teacher to rank her home assignment more highly, and the many adventures of Snoopy, including when he goes rabbit hunting.

And while the play itself has moments that are both funny and clever, it’s the Playhouse’s terrific casting choices and Alan’s usual gift for delivering perfect comedic timing and creative choreography that really makes this Charlie Brown a great pleasure.

What Is The Cast Like in This Charlie Brown Musical?

The cast of adults does an excellent job capturing the spirit of these classic Peanut characters, starting with Shawn Kilgore, who has just the right sad sack approach to the Charlie Brown who sends out a ton of Valentine’s Day cards but doesn’t get a single one back (when even Snoopy gets some cards and a box of chocolates, it’s a low blow.) And he’s just as good capturing the Charlie Brown who never lets any setback keep him from moving on to the next adventure.

Brandon Roberts looks like he was born to play Linus, and he’s quite funny becoming hyper when he gets away from his blanket. Molly Anne Ross had a particularly good scene where Sally presents a questionable homework assignment to her skeptical teacher, and Shonn McCloud has his own well-deserved laughs lauding classical music as Schroeder.

And I was laughing — and laughing — and laughing — every time Natalie Cordone was on stage as the bossy, opinionated, and always problematic Lucy, or when Jeffrey Correia was portraying Snoopy. His facial expressions, doggie body language and manic responses to everything from a late dinner to his need to bite someone, were absolutely hilarious. Truly, the cast is so good that this production is a real joy to watch.

Kudos also to the musical team: Playhouse Music director Christopher Leavy on piano, Ned Wilkinson on woodwinds and violin, Nick Rosaci on bass, and Sam Forrest on percussion, who help to bring the show’s songs vibrantly to life.

Where Can I see This Charlie Brown Musical?

Ticket prices are $45 for evening shows, $42 for seniors during evenings, $36 for 2 p.m. matinees, and $20 for students and theatrical industry professionals. Student rush “$10@10” offers $10 tickets (for students 25 years and younger) will be available 10 minutes prior to a performance when seats are available.

Rev. Bryan Fulwider on the nature of Christianity today
Polk County Sheriff’s Office Will Be Giving Away Free Turkeys This Thanksgiving