Talented Cast Breathes Passion, Excitement into “A Tale Of Two Cities The Musical” 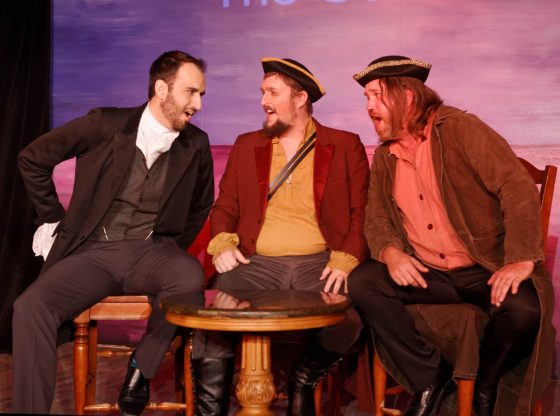 (Editor’s Note: This review is part of a new digital content space within Freeline Media to be known as Orlando Entertains. Think of it as a site within a site, focused on all forms of entertainment created by and for Orlandoans. There will be interVIEWS, preVIEWS, reVIEWS…all the VIEWS. It will serve to give more and expanded coverage to the creators that help our arts scene thrive. Stay tuned as this site grows from digital written content to also include audio and video coverage, perhaps sometimes even live! And we want feedback from YOU in comments to guide us on the way. Here we go!)

COLLEGE PARK — Touching on the concepts of honor, value, self-sacrifice and nobility, the ending of “A Tale Of Two Cities The Musical” has a rousing spirit that would make the creators of the “Les Miserables” musical smile and nod approvingly. Taken from the classic novel by Charles Dickens, the musical written by Jill Santoriello works astonishingly well, particularly if you’ve selected a large cast of exceptionally good actors and singers, as Central Florida Vocal Arts did for their local production.

The production, now being performed at the CFCArts Theatre at the Central Christian Church in Orlando’s College Park neighborhood, mainly employs a bare stage to tell the romantic saga of Charles Darnay, who is leaving France for England because of his disgust at the way his uncle, the Marquis St. Evermonde, ruthlessly abuses the starving peasants all around him. Annoyed by his nephew’s impudent attitude, the Marquis has his henchman John Barsad arrange to have Darnay arrested as a spy when he’s mysteriously found to be in possession of papers showing British troop placements.

Before his arrest, though, Darnay meets Lucie Manette and Jarvis Lorry, her guardian, who are searching for Lucie’s father, Dr. Alex Manette, who has been found alive in the Bastille after 17 years. Because Darnay showed her kindness, Lucie asks Lorry to find a lawyer to defend Darnay. That’s when we’re taken to the law office of Sydney Carton, an attorney with a tendency to get highly intoxicated — but also one who starts down a long friendship with Darnay, in ways that radically alter his outlook on life.

And in the meantime, the French Revolution is creeping up in the background.

What Makes This Show Work So Well?

While “A Tale Of Two Cities” makes for an enjoyable musical, filled with romance, irony, suspense and plenty of tear-jerker moments, the CFCArts production really scores a home run when it comes to casting. There are some truly standout performances here, by actors who appear to have a natural instinct for catching just the right tone and approach to an epic like this.

Plenty of examples abound. The performance by Maeghin Mueller as the Marquis has “scene stealer” written all over it; she’s despicably imposing as the heartless ruler who not only shows complete disregard for the suffering of the people, but also expresses scathing contempt for anyone who questions his motives. Whether it’s showing icy reserve when told about a pleasant boy whose hands were cut off as punishment for stealing food, or flying into a rage when someone has the audacity to toss a bag of coins at him, Mueller positively sets the stage afire creating a character you’re going to love to despise.

Equally captivating, in a far more comedic way, is the performance by Stephen Cauley as the rascally Barsad, a man of few principles, a near-complete disregard for justice and fairness, but curiously with a bit of respect for others who share such lowbrow social attitudes. Cauley seems to be having a rollicking good time playing this weasel, particularly when the character is called upon to conjure up flighty stories about what a darling little innocent he is, the pride of dear old mum. If the character isn’t exactly subtle, Cauley understands how best to showcase his villainous methods.

How About The Actors in ‘Straight’ Roles?

Some would argue that the villains always get the best roles, which isn’t entirely true. As the kindly Mr. Lorry and the sweet Lucie, both John Segers and Linsey Duca are well up to the task of generating sympathy and making the audience care about their characters’ fate — no small task in the play’s dramatic Second Act after the storming of the Bastille, when Darnay is put on trial because he’s a member of the aristocracy, even a lapsed one. Sentenced to death, Darnay can only await his miserable fate, although it sends Lucie and Mr. Lorry rushing into Paris to see if they can save him.

But that task really falls to Sydney, who makes an arrangement with his old acquaintance Barsad to let him into the prison to see Darnay. And he has a plan in mind …

Ethan Lolley is very good as Darnay, a role that doesn’t offer the cruelty of the Marquis, the over-the-top antics of Barsad or the grandfatherly sweetness of Lorry — in other words, the role mainly calls on Lolley to be nice, respectable, decent and honest, which he does impeccably. A far more flamboyant and emotional role is that of Sydney, who starts out as little more than a sorry drunk, later falls for Lucie … and then begins to discover a far greater degree of maturity — particularly as he watches Lucie and Darnay start a loving family, even amid the turmoil of the times — than we might initially have expected of him.

And there’s no question that actor David Bracamonte superbly takes full advantage of the role, portraying Sidney as a smart, cultured, clever man who nevertheless lacks the scruples that keep the rest of us on the straight and narrow. He makes Sidney’s awakening, and decision to pay the ultimate sacrifice, that much more believable, poignant and moving because of the way he seemed so brazenly headed in the opposite direction for most of the play.

Considering that other Dickens’ works like “Oliver Twist” and “A Christmas Carol” have been successfully turned into stage musicals, Santoriello deserves some applause herself for the concept behind this one, which she pulls off admirably. The story is a sad one, not surprising considering the subject matter, but a rewarding one just the same. And CFCArts certainly demonstrates that they know how to attract marvelously talented singers, actors and comedians and to make the entire production alternately rousing and touching.

“A Tale of Two Cities The Musical” is being performed at the CFCArts Theater in the spacious auditorium inside the Central Christian Church, 250 SW Ivanhoe Boulevard, in College Park. There are upcoming performances on Friday, Feb. 8 and Saturday, Feb. 9 at 7:30 p.m. The show runs for 3 hours with a 15 minute intermission.

Tickets are $25 for VIP Reserved Seats, $22 for general admission, and $11 for Half Priced Student Tickets. To order tickets, visit the CFCARTS website.

Nature Lovers and Natured-Themed Vendors Wanted in Lake County
A Tale Of Two Cities The Musical Is As Sprawling, Epic as the Book