Soundtrack To My Life Explores One Musician’s Life Journey 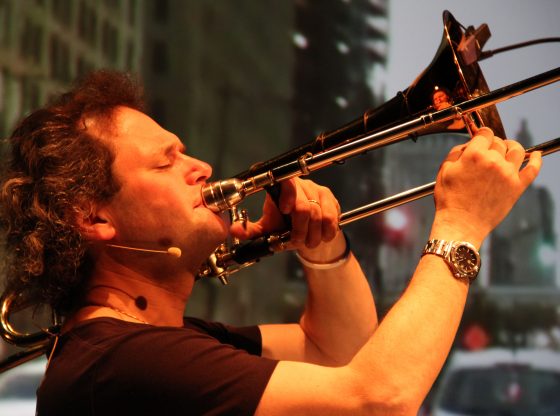 ORLANDO — Elias Faingersh, a Swedish trombone player, is a talented musician. He creates some truly beautiful and memorable sounds during his show at the Orlando International Fringe Theatre Festival, and as he opens on a bare stage, trombone in hand, it seems like we’re in for an hour of enjoyable music from the man who got dubbed “The Golden Trombone of Europe.”

But actually, Faingersh has a lot more in mind. His solo show, The Soundtrack Of My Life, employs three other key elements. One is his interactions with the audience, which are funny, and another is the visual accompaniment, courtesy of videos he shot, mainly in Europe.

And then there’s the running dialogue that Elias Faingersh has with … well, Elias Faingersh, a routine that he swears has nothing to do with schizophrenia. I suppose the audience members will have to decide that one for themselves.

What Is The SoundTrack Of My Life?

Faingersh’s concept is to use his sublime music as, yes, a soundtrack to moments in his life that he captured on video — starting, harrowingly enough, with his flight to Orlando a few days ago, on a plane that had a failed engine and had to make an emergency stop at a remote airbase in rural Canada. His selfies aboard that plane will leave anybody who hates flying looking at bus travel instead.

But mostly, his videos are picturesque looks at places he’s been to on his many tours, with the occasional oddball moment (Faingersh stopping to urinate, or to go skinny dipping in a lake, etc.) And he has a running dialogue with videotaped moments of himself, speaking in Swedish, offering advice on how best to perform in front of the Orlando Fringe audience.

Some of these moments work better than others, and I felt the video worked far more effectively during a deeply disturbing moment when Faingersh shows himself at home in Copenhagen, with his family on a quiet spring day, when the entire neighborhood suddenly confronts the potential horrors of terrorism.

Faingersh is known in Europe for his solo show “Trombone Magic,” which has been performed at the Royal Danish Opera, The Berlin Philharmonic and the Congress Hall of Riga, and he’s worked with the Ermitage Theater in Moscow and the London-based Belarus Free Theater. He clearly wants to bring both dramatic and comedic moments to this show, but it’s hard to deny that the real star here is the exquisite music he performs.

Where Can You See the Show?

The Soundtrack Of My Life is being performed at the Orlando Fringe Festival in the Brown Venue on the following dates: