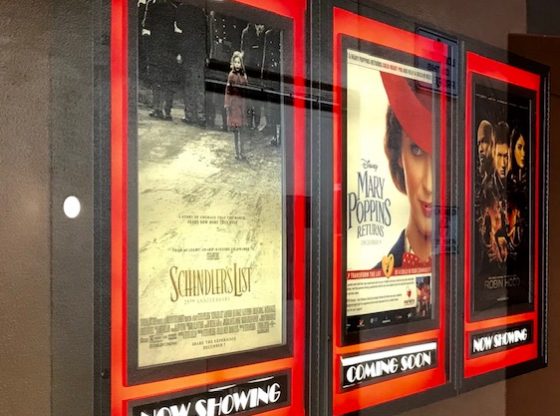 ORLANDO — A few weeks ago, I passed by a movie theater and stopped to check out what was playing for the holidays. Predictably, the fare included “Mary Poppins Returns” and “Robin Hood,” entertainment for the entire family, light and fun escapist fantasy.

Then I noticed something else: right next to the posters for those upbeat films was a third film, a movie I had seen before, decades ago — only the subject matter was radically different. This one was not about a magical governess or a hero who robs from the rich to give to the poor, but about the Holocaust.

I hadn’t known until then that director Steven Spielberg had decided to re-release his 1993 epic “Schindler’s List,” about the German businessman who ruthlessly exploits Jewish slave labor to build a profitable company, then realizes how horrifying their fate is, to mark its 25th anniversary.

“Schindler’s List” was originally released on Nov. 30 1993, right in time for consideration by the Academy Awards (it would win Best Picture and Best Director), and I first saw it on its initial run. But would a movie that vividly and painful dramatized the terrors of the Final Solution, the Holocaust and Auschwitz manage to attract an audience at a time of year when people are doing holiday shopping and putting up Christmas lights? I wondered.

So I sat down on Saturday and watched it again. And 25 years later, it still feels like a genuine cinematic masterpiece.

It’s well known that Spielberg decided to make a Holocaust film after reading a review of the book “Schindler’s Ark” by Thomas Keneally, which documented the life of Oskar Schindler, a Sudeten German businessman who ended up saving the lives of more than a thousand Jews from the death camps by employing them in his factories during World War II. At first questioning his own ability to direct such a harrowing historical film, Spielberg originally offered it to directors Martin Scorsese and Roman Polanski before deciding that he did in fact feel up to the challenge.

For the major roles he recruited relatively new (then) actors Liam Neeson as Schindler and Ralph Fiennes as Amon Göth, the savage SS officer in charge of the death camps, and veteran actor Ben Kingsley as Schindler’s Jewish accountant Itzhak Stern.

The result was a film that was a box office smash and swept the Oscars the following year. Some of the criticism of the film at the time — including Spielberg’s decision to make a Holocaust movie seen through the eyes of a German, with most of the Jewish characters in secondary or victim roles — seems trivial today.

Spielberg’s approach to the movie — filming it in black and white, with the look and feel of a documentary rather than a Hollywood drama — seems today like the perfect approach to this material. And one single artistic touch that got criticized back in 1993 feels considerably more powerful today: a bright red coat used to distinguish a little girl in the scene where the Kraków ghetto is liquidated by the Nazis. It’s a very brief moment in an otherwise agonizing scene as the residents of the ghetto either try to hide — unsuccessfully — or are simply pulled from their homes.

Later in the movie, Schindler sees the dead body of that little girl, recognizing the child by the red coat she’s still wearing. It’s his moment of awakening, when his apathy about the Final Solution starts to change. Spielberg has said in interviews that he wanted this scene to symbolize the reaction of the U.S. government, officials who knew the Holocaust was happening but did nothing to prevent it. The annihilation of European Jewry was allowed to continue, unchallenged.

Can The Film Still Move Audiences?

The film begins in Kraków in September 1939, when the Germans emerged triumphant following their invasion of Poland, and the real nightmare begins as the Germans start forcing Polish Jews into the Kraków Ghetto. At the same time, the film focuses on Oskar Schindler, an ethnic German from Czechoslovakia who hopes to make a fortune there but knows he needs help, so he recruits Itzhak Stern, a Jewish businessman, to arrange financing for his factory.

His motives are hardly altruistic at that point. Schindler remains friendly with the Nazis and dines with them, while treating his Jewish laborers, chosen because he can get them dirt cheap, with little to no real regard.

The scenes involving the slowly tightening grip over the local Jews are often excruciating and heart rendering to watch. A wealthy woman dressed in furs is forced to abandon her huge apartment and everything she owns as she gets transferred to the ghetto. As she and her husband march down the streets, children shout insults and throw mud at them, and their deep seated humiliation is painfully obvious. The same is true when they get placed into their new, cramped apartment, which they’re forced to share with scores of other families.

And yet, humiliation soon becomes the least of their worries.

One of the movie’s most terrifying moments is when Schindler and Stern create the “Schindler’s List” of more than 800 people to be transferred to Brinnlitz and saved from transport to Auschwitz, after bribing Nazi officials. But as the train carries the women and children, one woman looks out and notices a boy watching it pass by. As it does, he smirks and lifts his finger, running it symbolically across his throat — a warning that they’re being sent to die.

Sure enough, the train arrives at Auschwitz. And in perhaps the film’s most torturous moment, the women have their heads shaved, are striped naked, and sent into a chamber filled with shower hoses. Huddled together, the lights go out, and the woman begin to scream in agony. And we’re not sure if what happens next will be the gassing of each and every one to their deaths.

“Schindler’s List” received sky-high accolades in 1993-1994, and today that hardly seems like a rush to judgment. Filmmaker Billy Wilder, who is Jewish and was born in Austria, fled Germany after the Nazi takeover. Wilder’s mother, grandmother, and stepfather all died in the Holocaust. Upon seeing “Schindler’s List,” Wilder — who died in 2002 — called the movie “absolutely perfection.” A lot of us, myself included, could quibble with that assessment and find minor faults here and there; but overall, “Schindler’s List” remains an enormously powerful film, and one that documents a tragic part of history that reaches epic dimensions.

“Schindler’s List” is not only a stunning artistic achievement, but also quite timely. Disturbing poll show that in 2018, incidents of anti-Semitism in Europe are on the rise, and almost one in five Europeans believe that most anti-Semitism in their country is a response to the “everyday behavior of Jewish people.”

The same is true of the gunman who shot and killed 11 people at the Tree of Life synagogue in Pittsburgh in October.

And for those who think genocide ended with the Holocaust, they can look today at the genocide happening in Yemen, Syria, and among the persecuted Rohingya in Myanmar. The cycles of terror never end.

“Schindler’s List” is truly a universal film, and frankly, it doesn’t matter what time of year it goes into movie theaters. It’s a movie we should all we glad that Spielberg decided to make.