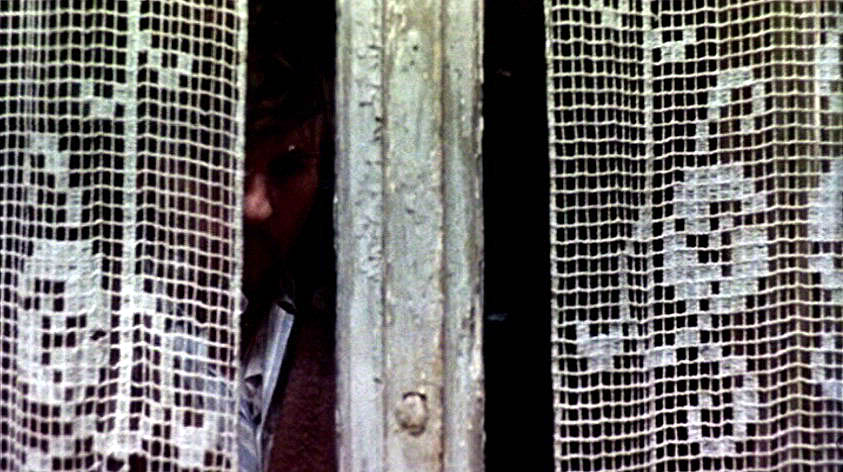 Editor’s Note: Film director Roman Polanski turns 86 on Aug. 18. Editor Michael Freeman looks back at the many ways that Polanski reflected his childhood in Krakow, Poland during the Nazi invasion and the Holocaust into his cinematic output, whether the films were in the category of horror, noir, or black comedy.

On the stairs, the shadows from the railing look eerily like the bars in a prison cell.

Trelkovsky is carrying two waste baskets of trash, while wearing a set of pajamas that look similar to what Jews wore in the concentration camps.

Trelkovsky, a Polish Jew living in France, has taken a tiny two-room apartment in Paris, which became vacant after the previous tenant, a young woman named Simone Choule, threw herself out the window. Trelkovsky desperately needs the apartment, and now he’s increasingly paranoid about losing it.

His mostly elderly neighbors complain constantly about noise. After a housewarming party that draws harsh complaints from neighbors and the landlord alike, Trelkovsky is sneaking down the stairs to get rid of the trash that had piled up during the party. On the way down, he spills some of it on the stairs. But when he comes back to retrieve it, the trash is gone … mysteriously.

Director Roman Polanski’s film “The Tenant,” in which the director himself played the role of Trelkovsky, was made in 1976 and is set in Paris during the 1970s.

But throughout this harrowing horror movie, there are echoes of the Holocaust, and of the Paris that, defeated by the Nazis in 1940, formed a collaborative Vichy Regime to enforce Hitler’s racial policies against so-called “undesirables,” including Jews, immigrants, and homosexuals. The regime also opened various concentration camps.

The Holocaust Forced onto The Tenant

“The Tenant” reflects on this grim, appalling history in subtle ways. The older tenants in his building appear hostile to Trelkovsky, who is Polish, for being an immigrant, even though he repeatedly points out that he’s a naturalized citizen. Eventually, Trelkovsky begins to fear that Simone Choule – who, as her friend Stella points out, wasn’t interested in men and may have been a lesbian – might have been pushed or thrown out her window, and that his neighbors may be plotting to do the same thing to him.

Although frequently viewed as a horror film about paranoia and insanity, “The Tenant” also recreates the hostile, menacing atmosphere that confronted French Jews during the Vichy Regime. Polanski, born in 1933 in Paris, moved with his family to Krakow in 1936 and was living there when Germany invaded Poland in 1939. His mother, who was pregnant at the time, died in Auschwitz, while his father survived the Mauthausen Concentration Camp. Polanski himself survived by hiding with a rural peasant Catholic family.

As a Holocaust survivor, Polanski has only made one film, “The Pianist,” that directly references the Holocaust. But as the anniversary of the Nov. 9 1938 Kristallnacht pogrom against German Jews approaches, Polanski’s cinematic output is worth reviewing for the ways in which several of his films, particularly his horror movies, make subdued references to his horrific childhood.

Poland and the Holocaust in The Pianist

“The Pianist,” made in 2002, tells the true story of Wladyslaw Szpilman, the Polish Jewish pianist and composer who was living in Warsaw when the Nazis invaded Poland. He watched his entire family get sent to the gas chambers, and survived mainly because friends hid him in vacant apartments in the city throughout the war.

Watch “The Pianist” sometime along with “The Tenant,” and you’ll be surprised at the way the imagery of both films tend to blend in with one another. Both films feature timid Polish Jews as the protagonists, and both are hiding in their apartments, fearful of the neighbors around them.

In one scene, Szpilman (played by Adrien Brody) and his family watch from their apartment window as the Nazis burst into an apartment building across the street, then hurl an elderly man in a wheelchair off the balcony to his death.

In “The Tenant,” Trelkovsky watches from his window as his neighbors, landlord, and several police officers (who look like SS Brownshirts) beat and torture an older woman and her disabled daughter, who had been victims of a petition to force them out of the building for being too noisy.

Both films, a somber drama like “The Pianist” and a surreal horror movie like “The Tenant,” create a terrifying atmosphere of oppression and brutality toward people who are different from the pack, and show the true terrors of a nationalist mob mentality.

Polanski also made references to the Holocaust in three other films.

THE LAMP: This short film, made while he was a student at the Lodz Film School, in set in a doll maker’s shop. We watch as he creates new dolls, which have faces similar to little children. When the owner leaves for the day and locks up, there’s an electrical short circuit that starts a fire. The dolls in the shop, with their cherubic young faces, start burning in the rapidly spreading flames. The scene conjures up unsettling imagery of the Jewish children sent to the gas chambers.

THE FEARLESS VAMPIRE KILLERS: Polanski’s horror-comedy about vampires in Transylvania opens in a Jewish-owned inn visited by a vampire hunter Abronsius and his assistant Alfred, who are looking for the vampire’s castle in the snowy mountains. When the innkeeper’s daughter Sarah gets kidnapped by the vampire Count Krolock, Abronsius and Alfred go to the castle to rescue her. They escape in a horse-drawn carriage, only to find that Sarah has become a vampire – and she promptly bites into Alfred’s neck. The film’s narrator ends by noting, “That night, fleeing from Transylvania, Professor Abronsius never guessed he was carrying away with him the very Evil he had wished to destroy. Thanks to him, this Evil would at last be able to spread across the world …”

The movie has the look of a painting by the Jewish artist Marc Chagall and his vivid recreations of historic Jewish villages in Russia, but despite it’s humor, the ending is a devastating one. Sarah, after all, is Jewish, and it was Hitler who warned about the spread of the Jewish population as a force of evil, which is why he wanted to wipe them out. Though primarily a satire of horror films, Polanski’s film ends by mocking the stereotype of that “spread” of the evil that Hitler warned about.

ROSEMARY’S BABY: This horror movie from the novel by Ira Levin is set in New York City in 1966, and focuses on a young woman, Rosemary, and her husband Guy. When Rosemary becomes pregnant, she begins to fear that her neighbors are witches who are part of a Satanic cult, who want her baby for a bloody ritual. Her fears turn out to be even worse; Rosemary has actually been impregnated by Satan and given birth to the Devil’s child.

Made in the late 1960s, when Hollywood was still promoting happy ending where the forces of good win in the end, “Rosemary’s Baby” had one of cinema’s most deeply pessimistic endings. Evil is fully triumphant, conquering the forces of faith and hope, and starting a path toward dominating the world through darkness and evil. The insideous terror in the film is about overreaching ambition, the lust for power, and the fact that is comes from within us as a society. Only a Holocaust survivor who had watched evil, in the form of the Nazis, conquer Poland could have given the film such a potent ending.

Polanski’s newest film, the thriller “Based On A True Story,” opens in France in November. And as the anniversary of Kristallnacht approaches, check out some of this Holocaust survivor’s films that, in ways both subtle and quite graphic, offer a chilling reminder of why history should never, ever forget this very dark chapter.

Michael Freeman is an Orlando journalist, playwright and author of the terrifying, violent and gory book “Bloody Rabbit”. Contact him at Freelineorlando@gmail.com..