Review: When life has you down, then “Enter, Pursued by a Whale”

Home /Entertainment, Opinion, Politics, Theater/Review: When life has you down, then “Enter, Pursued by a Whale” 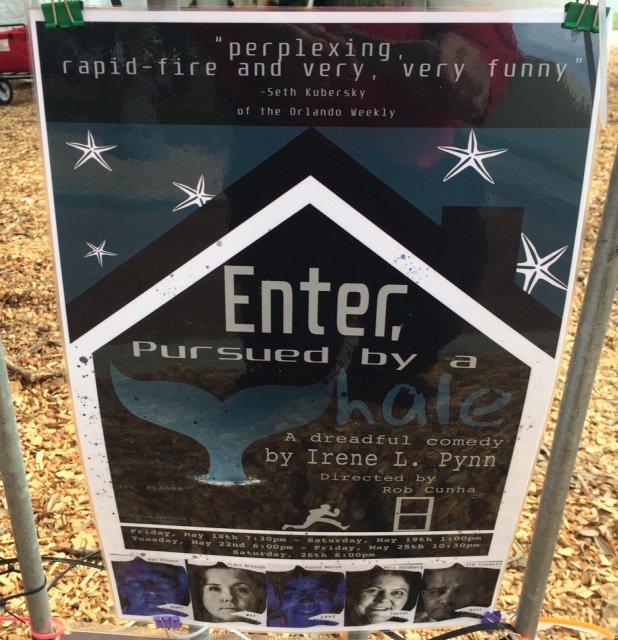 ORLANDO — Perhaps it doesn’t seem all that strange when Hawel arrives at home, looking frantic and disheveled, that he’s right in time for a surprise “retirement” party thrown by his wife, Melody, and their best friends.

Looking a bit like a man who just survived a car crash, Hawel hardly seems in the mood for a party, and that’s when he confesses that he’s terribly upset because he ran home being chased by a whale.

No, not a whale-sized person, but an actual whale.

Being city folks, the idea that a large mammal had chased Hawel through the streets seems far-fetched, to say the least, but Hawel is insistent. Then again, as he settles in to the party, we learn that Hawel, a Bible salesman who also happens to be an atheist, isn’t really retiring, but has been fired after posting some uncouth critiques on social media. His friends use the term “retirement” to help gloss over that sad fact.

At first, the play “Enter, Pursued by a Whale,” by writer Irene L. Pynn seems like a dark comedy about a man undergoing a serious mid-life crisis. Hawel (played by Ken Pruess) continues to react in a dazed and bewildered manner, despite the efforts by his wife, Mel (Traci McGough), and their neighbors (played by Peri Goldberg and Jim Cundiff) to cheer him up. Okay, so he thinks the whale is following him. Isn’t this the way a mid-life crisis is supposed to impact people?

Hawel also seems to have an overly hostile reaction to the fact that his wife invited their 19-year-old pool cleaner, Leviathan (Daniel Molina), to stay for the party, but that seems to make sense. After all, his life appears to be falling apart, and who wants strangers to watch such a sorry spectacle?

So we observe as family, friends and strangers alike react to Hawel’s manic episodes … although slowly, in a eerily subversive way, the story begins to take on bizarre plot twists. First Mel announces that Hawel need not worry about the future, because a former boyfriend of hers who went on to make millions has died — and left her everything. Millions.

And then, when Mel and Hawel have an argument and a tearful Mel storms out, the story takes on an even more bizarre twist — not to mention a delightfully intriguing one.

“Enter, Pursued by a Whale” is a boatload of fun, because it makes you go fishing for answers, reeling you into it’s weird mix of the hum drum of daily life and totally absurdist new directions. The more you try piecing it all together, the more quickly it zips off to the unexpected. And the cast captures it all quite nicely, balancing Pruess’ high stung performance with the more low-key acting of his wife and friends. Everyone, that is, except for Molina, who has some of the show’s funniest moments as the goofy 19-year-old. But here’s a tip: watch that potato chip munching kids quite closely.

In a key scene, they play a game of trying to think of stories with whales in them, citing classics like “Pinocchio” and “Free Willy.” They leave out a key one, Herman Melville’s “Moby Dick,” although Hawel’s failure to remember the title gets some good laughs. And then again, “Mody Dick” was a metaphor, and “Enter, Pursued by a Whale” may be as well, especially with the highly symbolic ending. It’s certainly a lot of fun along the way.

“Enter, Pursued by a Whale” is now being performed in the Blue Venue at the Lowndes Shakespeare Center as part of the Orlando International Fringe Theatre Festival. Tickets are $10 and you first need to purchase a $10 Fringe Button to get into the shows.

Review: A wandering lost soul in “Jack Kerouac: End Of The Road”
Review: Watching the fall of Berlin in “Eleanor’s Story”