Review: What’s with “The Hound of the Baskervilles”? It’s Pawsome! 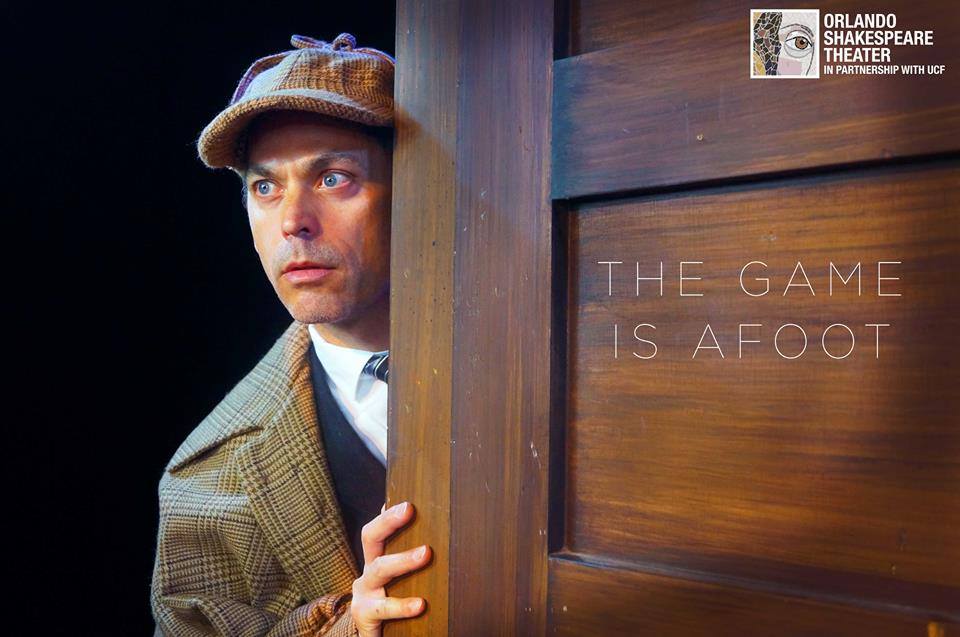 ORLANDO — “The Hound of the Baskervilles,” the new production at the Orlando Shakespeare Theater, may be the supreme version of the Sir Arthur Conan Doyle novel — supremely silly, supremely goofy, and perhaps one of theater’s great defenders of the bad pun.

If you’re tired of theatrical productions of 18th century plays about depressed people who do depressing things and suffer morbid endings, “Hound” is your anecdote for sure.

This version of the Sherlock Holmes saga about the hunt for a man-killing-beast in England, adapted by Steven Canny and John Nicholson, is a wildly campy send up of all things Sherlock, with a three person cast trying in often extravagant ways to out-mug one another. You can tell when actors are having a grand old time on stage, and this is one of them.

From the very opening moment, when actor Chris Crawford comes on stage and hears the ominous, menacing howl of a hound getting closer and closer — and then dies one of the hammiest deaths in theater history, the Fourth Wall between audience and performer gets shattered as actor Simon Needham comes out to interrupt the proceedings and announce that they forget to mention some important notices before the show started. Hey, better late than never, right?

The Fourth Wall gets broken a lot (including a few times in Saturday night’s show that felt improvised) as the three performers make a mad dash for larfs. Sherlock Holmes purists, at least the more dour ones, are likely to find not much of Doyle’s book in this one, but it’s hard to deny that this Monty Python-esque madcap adventure isn’t pretty hilarious most of the time.

A couple of ingredients go into making this one successful. So, approaching this review like a finely academic term paper, let me jot them off:

Visual effects: The director, Jim Helsinger, has a glorious time setting up sight gags, including Needham and Crawford on a train that keeps going through dark tunnels that blot out the lights — with a new visual gag awaiting us each time the lights return. There’s similar fun in a steam bath and in a marsh filled with quicksand.

Timing: All three actors — Crawford, Needham and Steven Lane — zip through the show at lightning speed, delivering their oh-so-silly dialogue and hardly waiting for the laughs to roll in before they’re on to the next skit. There’s hardly a better moment for this than at the start of the second act, when the boys get a note from the audience that poo-poo’s Lane’s performance as Sherlock (even Mayor Buddy Dyer(!) and the Orlando Magic team signed it), and an enraged Lane insists that they redo the entire first act so the audience can see how truly brilliant and inspired his Holmes interpretation was. And yes, Act I in 5 minutes is pretty darn funny.

Actors: Can there be any greater sign of theatrical talent, of the gift for impressive stage performing at its best, than three talented actors who have no fear of being completely ridiculous for two hours? Needham mainly plays Dr. Watson and Crawford hilariously juggles multiple roles, from Sir Henry to Mortimer, but it’s Lane who goes the distance with not just a stiff, broomstick-up-his-ahem Sherlock Holmes but also the suspicious Stapleton and, most delightfully, the alluring Cecile. I loved when he (she?) engaged in a tango with Crawford that’s right out of the 1959 movie “Some Like It Hot.”

So as we all look forward to the next community theater production of those aging Swedish dramas about people whose lives positively suck and who let us know about it for three hours, take a moment to escape into this zany two hours of laughter, merriment and good cheer that has no higher ambition than to simply make us laugh our tookus’ off.
Amen to that.

Michael Freeman is an Orlando journalist, playwright and author of the terrifying, violent and gory book “Bloody Rabbit”. Contact him at Freelineorlando@gmail.com..