Review: Polanski’s “The Tenant” on DVD. 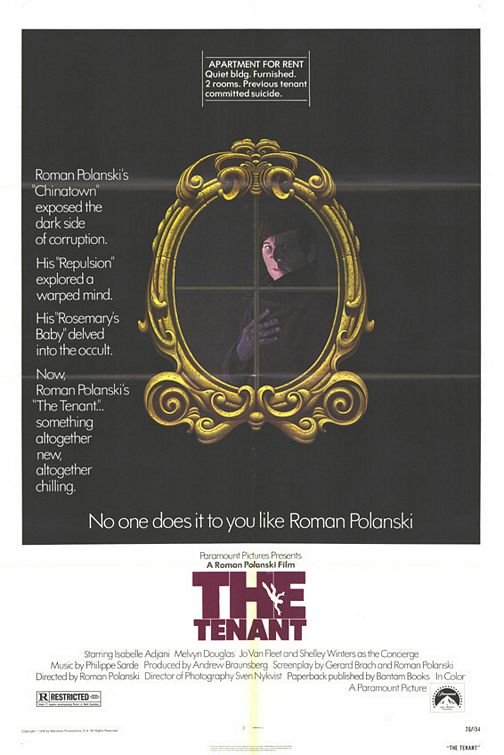 Editor’s Note: Roman Polanski’s movie “The Tenant” was released in the United States on June 11, 1976 — and flopped. More than 30 years later, the movie is now considered one of the director’s best. Here, editor Michael Freeman looks back the movie and how well it has aged over the years.

When Trelkovsky, a mild-mannered and soft-spoken office clerk, learns of a vacant apartment in housing-strapped Paris, he quickly goes to look at it. But he ignores the early warning signs about the building.

The concierge is rude and will only show him the apartment after he places some cash on her table. Her dog snaps at him. The landlord asks plenty of nosy questions before deciding Trelkovsky is acceptable.

The apartment is vacant because the previous tenant, a woman named Simone Choule, threw herself out the window.
Anxious about getting this badly needed space, Trelkovsky visits Simone in the hospital to gage her chances of recovery. He gets his answer when the woman, so badly injured she’s wrapped in bandages like a mummy, lets out a horrifying scream. She dies shortly afterwards, and the apartment is his.

None of those early forebodings – the snide treatment by the landlord or Simone’s dreadful scream – deter Trelkovsky from taking the two small rooms with the public toilet across the hallway.

In fact, the increasingly hostile treatment by his fellow tenants – who complain constantly about noise – only makes Trelkovsky that much more determined to be the perfect, quiet-as-a-mouse neighbor.

He increasingly confronts mysteries in the building: strangers entering the public toilet and standing motionless for hours, or spilled garbage on the stairs disappearing into thin air. Slowly, Trelkovsky comes to think there may be something more to these bizarre incidents. Perhaps a plot … aimed at him?

Roman Polanski’s horror film “The Tenant,” was adapted from the novel by French satirist Roland Topor. Although the film received a hostile reception upon its initial release in the summer of 1976, the film’s surreal mysteries have aged remarkably well.

After Polanski won the Academy Award for best director for “The Pianist” in 2003, “The Tenant” was re-released on DVD, to critical acclaim, with some critics calling it a classic of the horror genre, and others the quintessential Polanski film, perhaps his best work.

As he did with his earlier horror film “Rosemary’s Baby,” Polanski remains extremely faithful to Topor’s novel, incorporating most of the book and the vast majority of its dialogue.

At first, Polanski revels in the black comedy of Topor’s narrative, as Trelkovsky (played by Polanski himself) awkwardly stumbles along in his efforts to ingratiate himself among loud, bombastic and pushy neighbors and coworkers. He allows a tramp to filch his wallet during a date with Simone’s friend Stella. He cowers when a coworker blasts his stereo full volume.

But these are petty annoyances compared to what Trelkovsky endures when he comes to think his neighbors are conspiring against him – that they hatched a similar plot against Simone Choule forcing her to commit suicide.
He thinks they’re doing the same thing to him. Not only in the way they constantly harass him about nonexistent noise, but also in the way they seem to push the former tenant’s habits onto him.

A local cafe owner serves him hot chocolate every morning, which Simone drank, rather than his usual coffee, and tries to get Trelkovsky to smoke her brand of cigarettes; the landlord advises him to wear slippers at night when he walks around the apartment – just as Simone did. The concierge gives him Simone’s mail.

To Trelkovsky’s mind, the aggressive attempts to push Simone Choule’s habits and lifestyle onto him add up to one conclusion: They’re trying to transform him into the dead woman, taking on not just her identity, but her grisly fate as well.

It all comes to a head during the film’s most chilling moment when Trelkovsky, suffering from a fever, sees the ghost of Simone Choule in the bathroom across the hall, ghoulishly unwrapping the bandages that had covered her in the hospital.

The next morning, when he sees two workers fixing the glass ceiling she fell through and shattered during her suicidal leap, he understands immediately: They’re fixing it for him.

“The Tenant” is usually thought of as a terrifying film about one man’s descent into mental illness; but I think the film’s horrors have a lot more to do with the menacing, oppressive nature of social conformity and cultural isolation than with the mechanics of madness.

In the beginning, Trelkovsky is desperately intent on conforming, but his task is an impossible one. A Polish Jew, he’s constantly reminded – in subtle and not-so-subtle ways – that he’s not really one of them.

The insidious nature of social isolation calls up memories of the Nazi persecutions of Jews, gays, gypsies and other socially undesirable groups in the years before the start of World War II.

Trelkovsky is constantly reminded of how severe those threats could get.

The concierge barely acknowledges him. The landlord repeatedly threatens to evict him. Madame Dioz, who launched a petition drive to force out a noisy neighbor, hints that Trelkovsky could be next. The local police chief browbeats Trelkovsky following a noise complaint filed against him, and asserts that Trelkovsky isn’t even a French name – insinuating that he has fewer rights than the rest of French society.

Is he imagining it all? Or is Trelkovsky the one person who sees his neighbors as clearly as in the bright sunlight of daytime?

In addition to his religion and ethnicity, there’s also the question of Trelkovsky’s sexual orientation. Several times during the film there are suggestions that Trelkovsky might be gay – as was the previous tenant, Simone.
Trelkovsky fails both times in his efforts to romance Stella – interrupted by a peeping tom while making out in a movie theatre, and then passing out from too much alcohol at her apartment.

He allows Simone’s friend Georges Badar to kiss him while consoling him about her death, and subtly flirts with the male host of a party Stella invites him to. Later, he seems to be propositioning a bartender – although it turns out he was asking the man where he could buy a gun. For Trelkovsky, his uncertain sexual identity mirrors his inability to develop a complete and assertive personality. It’s no surprise he comes to feel overwhelmed by the neighbors.

“The Tenant” offers unique similarities with two other Polanski films. Both this one and “Rosemary’s Baby” are about shy, withdrawn individuals (Rosemary, Trelkovsky) who are looking for an apartment in big cities. Both have suicides where women threw themselves out of high-story windows. Both involve the possibility of plots against the lead characters by sinister neighbors. And both films toy with the notion that the plots are the imaginary fears of an increasingly unsettled mind.

Coincidences that are fascinating to ponder … except for the source material: Topor wrote his novel in 1964, while Ira Levin wrote “Rosemary’s Baby” three years later.

“The Tenant” also bears comparisons to “The Pianist”; both feature Jewish protagonists who spend part of the film hiding in their apartments, terrified of their neighbors. “The Pianist” was based on the memoirs of Wladyslaw Szpilman, a Polish Jew who hid from the Nazis in German apartment buildings. Szpilman and Trelkovsky both walk on tip-toe in their apartments, fearful of the reprisals for making too much noise – and in both cases, they fear the result will be death.

“The Tenant” has aged well, I think, because its complex plot, with incidents that don’t immediately string together, slowly weaves an ominous spider’s web that engulfs Trelkovsky.

The film can be seen multiple times, and the viewer will always discover something new, something they missed earlier. It’s a film that terrifies us by its reminder of how appalling it can be when a majority of society cherishes its right to be exclusively around people who are just like them. The consequences for the social outsider, it’s clear, can be devastating.