Review: Death And Vanilla reimagines the score for a horror classic

Home /Media/Review: Death And Vanilla reimagines the score for a horror classic 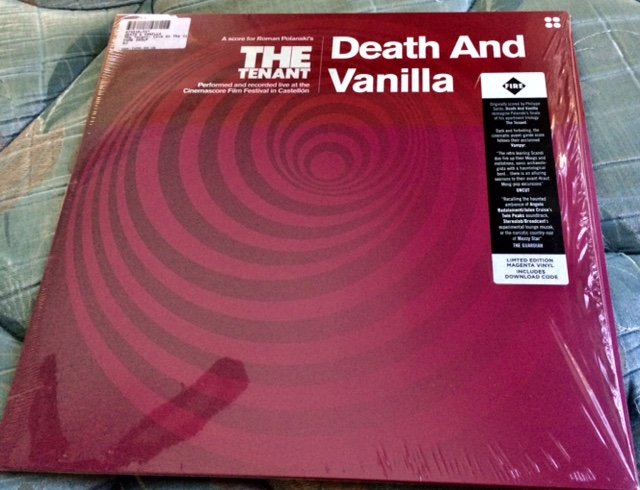 French composer Philippe Sarde recalls that he first met film director Roman Polanski in 1975. Polanski would hire him to write the score for three of his films, starting with his 1976 horror classic “The Tenant.”

Polanski adapted the novel by Roland Topor, “Le Locataire Chimerique,” with screenwriter Gerard Brach, who introduced him to  Sarde’s scores for several French films. As Sarde noted in the liner notes for the soundtrack to “The Tenant,” the screenplay had made a strong impression on him. “The subject was profound and disturbing, and impregnated with the great themes of Polanski’s work: the ambiguity of truth, evil, persecution, paranoia…” he wrote.

What Was The Movie ‘The Tenant’?

The story involved a man named Trelkovsky, who takes over an apartment after the previous tenant, a young woman, threw herself out the window. She crashed through the glass roof below, giving Sarde the idea to focus on how glass becomes an obsession for Trelkovsky.

“That was where I got the idea of an unusual instrument for the film, the glass harmonica, a large mahogany trough full of empty glasses that the musician causes to vibrate after wetting his fingers,” he

Although the film was a critical and box office failure when it first opened in June 1976, it’s highly praised today as a brilliantly disturbing horror movie and, in the view of some critics, Polanski’s best film. Likewise, Sarde’s score has also been highly acclaimed, particularly the opening theme, “Cour d’immeuble,” where the eerie use of the glass harmonica perfectly captures the burgeoning sense of paranoia and isolation that the film strives for. As Sarde himself noted, ” … for me, ‘The Tenant composer’ label is persistent,” and would lead to plenty of offers to score other films.

How Did Death And Vanilla Reimagine The Score?

Considering how effective Sarde’s score is — whether you’re watching the movie on DVD, or simply listening to the soundtrack — it takes a certain amount of gusto to leap into the hearty task of reimagining the film’s music. Still, you have to give a lot of credit to the European group Death And Vanilla, which has created an entirely new score for “The Tenant.” Even more impressive, it makes no attempt to imitate, parody or in any way copy what Sarde had already done. This is an entirely unique and innovative approach to scoring the film, one that seems guaranteed to surprise anyone who knows the original score.

Death And Vanilla was formed in Malmö, Sweden by Marleen Nilsson and Anders Hansson, and they’ve become known for using vintage musical equipment that includes the vibraphone, organ, mellotron, tremolo guitar and Moog. “The Tenant” score was recorded live at the Cinemascore at the 10th Cinema & Music Festival in Castellon, Spain, as a trio with Magnus Bodin, and has been released on LP by Fire Records. When they first performed the score live, they did so while playing “The Tenant” on a large screen to show the audience how their music fit into the film.

The two scores offer a stark contrast. If Sarde used compositions like “Apparitions” and “Conspiration” to unsettle the audience and capture the sense of fear and horror building around Trelkovsky — and it’s a highly sophisticated horror score — Death And Vanilla go in an entirely different direction. With a few exceptions, their score is less focused on generating fear than in capturing the feeling of disorientation that Trelkovsky experiences as his neighbors begin to harass him for being too noisy, and he starts to lose his sense of identity.

Their opening composition, “Le Locataire,” sets the mood for the rest of the soundtrack. Dark, brooding, and sometimes ominous, it’s hypnotic and disquieting. If Sarde worked within the range of traditional horror scores, Death And Vanilla go in a far more avant garde direction. The Guardian noted that this score seemed closer to “the eerie, haunted ambience of Angelo Badalamenti/Julee Cruise’s ‘Twin Peaks’ soundtrack,” that touches on everything from ‘50s lounge muzak to French ‘60s pop.

In fact, this very gothic score is more likely to capture the sense of loneliness and alienation that Trelkovsky experiences than his sense of paranoia terror. Songs like “Dioz Delirium,” meant to be used in the film as Trelkovsky is harassed by a pushy neighbor, Madame Dioz, feels seductively repetitive, in a way that wears you down, leaving you feeling quite unsettled — just as Trelkovsky was supposed to feel as Dioz starts to berate him. And at least one of the songs, “Everything Is Always Happenings,” feels closer to traditional scary film music, and very effectively so.

“Death And Vanilla: A Score for Roman Polanski’s The Tenant,” is fascinating to listen to because it’s both highly original and radically different from Sarde’s work. Although the score was issued on limited edition magenta vinyl, it’s since sold out, but is worth looking for on sites like Amazon and EBay. Whether you’re a fan of the Polish film director’s acclaimed apartment trilogy (which also included “Repulsion” and “Rosemary’s Baby”), of Death And Vanilla’s past work, or simply of rich Avant garde music, chances are you’re going to find this a highly rewarding experience.

Michael Freeman is an Orlando journalist, playwright and author of the terrifying book “Bloody Rabbit”. Contact him at Freelineorlando@gmail.com or call 321-209-1561.

“Pogrom,” a Disturbing Look Back at a Horrific Chapter in History
Reliving a Horror Movie Classic in “This Is No Dream: Making Rosemary’s Baby”