Remembering Boris Karloff, the genius behind the monster

Home /Entertainment/Remembering Boris Karloff, the genius behind the monster 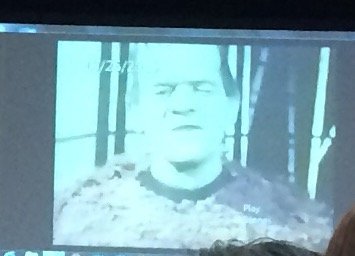 SAN DIEGO — When the movie “Frankenstein” was released on Nov. 21, 1931, Hollywood had no idea whether it had a hit — or a flop — on its hands.
“No one knew the film would be a hit — or that the monster would be the star,” said Sara Jane Karloff, the only child of the movie’s huge star, Boris Karloff, who quickly become immortalized in the eyes of the world for playing the monster.
What isn’t known, Sara Karloff noted, is that while the film made her father an overnight sensation in the movie world, it wasn’t his first film. In fact, by then he had made close to 100.
“It was my father’s 87th film,” she said, “and no one saw the first 80. He was 44 years old and had been in the business for years, and suddenly found himself to be an overnight star. And he wasn’t even invited to the premiere.”
On Friday, Sara Karloff looked back at her father’s diverse career — which included hit movies, long-running Broadway shows, and three television series — right up until his death in 1969.
Her presentation, “My father Boris Karloff: More Than a Monster,” was given to a packed room at the Town & Country Inn in San Diego, where the organization American Mensa was holding its 2016 Annual Gathering.
Sara Karloff noted that her father would play the Frankenstein monster role two more times, before deciding it would lapse into parody if he didn’t move on.
“My father made only three Frankenstein movies,” she said. “There was ‘Bride of Frankenstein’ and ‘Son of Frankenstein.’ Thank God there wasn’t a ‘Daughter of Frankenstein.’ ”
But it took the actor a long time to get there. “I was born on my father’s 51st birthday,” she said. “My father’s real name was William Henry Pratt. He changed it in his 20s.”
Born in London in 1887, he had decided early on that acting was his passion, she said.
“From a very young age, he was passionate about becoming an actor, rather than a diplomat, to the horror of his family,” she said.
He would eventually settle in British Columbia, where he worked for several small theater companies.
Despite his lack of experience, “He presented himself as an established British actor,” she recalled, “and then as now, a British accent goes a long way.” He was soon making $30 a week as an actor, while doing side jobs as well, including driving a truck and digging ditches.
Eventually he resettled in Hollywood in the 1920s, where he was hired as an extra.
“He was cast mainly in ethnic parts because of his dark features,” Sara Karloff recalled. “He worked as an extra for many years.”
It was not a profitable living, she added, and he often lived on a single can of soup meant to last for days.
“He bought soup and he would drink the broth one day, eat the vegetables the next day, and eat the meat the next day,” she said.
Karloff would eventually get cast in bit roles, which led to his breakthrough role in 1931 in director Howard Hawks’ movie “The Criminal Code.”
“It was a small part, but a showy part,” Sara Karloff said.
Not long afterwards, Karloff was spotted by film director James Whale, who was looking for an actor to play the lumbering monster in his adaptation of the novel by Mary Shelley, “Frankenstein.”
“James Whale the director spotted him and sent someone over to his table and asked him to come over,” Sara Karloff said. “My father was wearing his best suit, probably his only suit. Whale asked him if he wanted to audition for the role of the monster.”
Karloff got the part — which turned out to be a grueling experience. “The makeup was lead based, which was very dangerous,” she said. “It took four hours to put it on every day, and three hours to take it off, so in addition to seven hours a day sitting in the makeup chair, he spent hours filming. My father lost 25 pounds making the film, and he was already very thin. His days would be 19 hours long.”
Suddenly a star, he went on to other good lead roles, including in “The Mummy” in 1932.
“He was the original mummy,” Sara Karloff said. “It took a long time to wrap him in the gauze wrappings. That was an iconic role and duplicated many times over. But that’s the only time he played it.”
Karloff would continue to make films through the 1940s, like “The Body Snatcher” with Bela Lugosi, before moving to New York in the 1950s and shifting much of his career to television and Broadway.
He was the star of three TV series, including “Thriller,” and “He really enjoyed doing television,” Sara Karloff said. “He also did a lot of Broadway work. One of them was ‘Arsenic And Old Lace,’ a role written for him.”
In 1959, Karloff “moved back to his beloved England and had a flat in London,” she said. “He died in 1969 on Groundhog’s Day, which would have appealed to him, I think.”
One of his final movies was “Target” in 1968, in the role of Byron Orlok.
“In the late 1960s, my dad made a film called ‘Target’ with (director) Peter Bogdanovich, which is my favorite film,” Sara Karloff said. “My father got cast as an aging horror star. It was a wonderful film and my dad is essentially playing himself.”
For a man who started out as an extra in Hollywood, his career eventually blossomed into great stardom and success, she said.
“In total, my father made about 170 films,” Sara Karloff said. “That’s a huge body of work.”
He’s also remembered for another role: as the voice of the narrator, and of the Grinch, in the 1966 animated television special, “How The Grinch Stole Christmas.”
“He owns a bit of Halloween,” she said, “and he owns a bit of Christmas.”

The plight of the social outcast: follow the dark journey of “Bloody Rabbit”
HiQora brings together Mensa’s smartest world champions