Rags To Riches Glamour or Political Drama: Evita Has it All

Home /Reviews/Rags To Riches Glamour or Political Drama: Evita Has it All 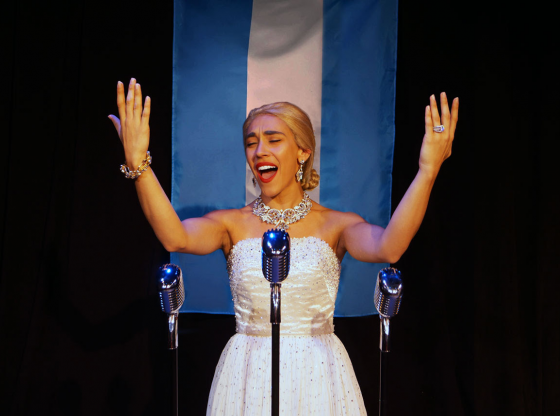 ORLANDO — The musical Evita features such a larger-than-life lead character that it all feels like a wildly imaginative, Hollywood on steroids piece of fiction: it has the essence of an updated fairy tale like Cinderella, where the sweet girl in rags is so beautiful that she attracts the attention, and love, of the Prince, and they live happily ever after. Who doesn’t love a fairy tale with that kind of feel-good ending?

Evita, of course, isn’t fiction, and it’s not the kind of story Disney would have told. The Tim Rice/Andrew Lloyd Webber musical traces the life of 15-year-old Eva Duarte, who hopes to rise out of her small town to find a better existence in Buenos Aires.  She attracts the attention of a tango singer, Agustín Magaldi, and convinces him to take her to the big city.

One of the pleasures of watching the new production of this Broadway hit at the Orlando Shakespeare Theater is the way director Nick DeGruccio balances the rags-to-riches side of Evita’s rise — and how a legend was born in Argentina — with how positively ruthless this lady was to reach the top. And if you’re not sure that the wife of a nasty, brutal Argentine dictator, and a woman who died in 1952,  is truly worthy of an entire musical, keep in mind that the play’s political intrigue is at times even more interesting to watch than Eva’s personal life.

What Does Orlando Shakes Bring to Evita?

Eva, of course, got much of her legendary status not just from her film career, but by attracting the attention of Juan Domingo Perón, an ambitious military colonel making his way up the Argentine political ladder, who falls for her about the same time he leads a right-wing coup that makes him Argentia’s new president/dictator. The song “A New Argentina” is particularly instructive, since it balances Eva’s attempts to rally the masses to her husband’s “cause” with Juan’s tactics of  disposing of the opposition by beatings, intimidation, and making people “disappear.” Again, not Cinderella or Disney stuff.

And then we have Eva’s efforts to ingratiate herself into high society, which completely rejects her.  She will find some unpleasant ways to enact her revenge.

As Eva Peron, actress Yael Reich engagingly takes on a character who isn’t especially likable, demonstrating how she employed a high degree of cunning and cruelty toward her opponents and minimal regard for anyone besides herself to get where she wanted to go. If the poorest in society claim the Peron administration has abandoned them, why not pass out money to  win their “love?”

And there’s no finer moment showing just how shallow Eva Peron was than in the song “Rainbow Tour,” about her publicity stunt across Europe, hoping to look glamorous and exotic, only to feel enraged at the countries that don’t much care for the wives of fascist dictators.

Both Reich and Rodrigo Ignacio Cruz as Juan Peron, the dictator who crushes his opponents but treats his wife like his little baby doll, do an excellent job portraying people who have no business attracting sympathetic supporters, and they’re especially good at taking us through Eva’s slow death scenes, which make Ali MacGraw’s bedridden demise in the 1970 movie Love Story seem quick and painless by comparison.

What Works Best in the Musical Evita?

But for me, the most interesting character in the play was Che, who acts as our narrator and in effect the voice of the audience, commenting ironically, comically and sometimes bitterly on what Juan Peron did to his country: eliminating basic freedoms, shutting down newspapers to choke off any dissent, while pretending to be a man of all the people. And his wife, his biggest supporter, rarely had much beyond her own narcissistic ambitions to guide her.

Che, in a really terrific and energetic performance by Dan Domenech, humorously and disturbingly sums up just how devastatingly the world of politics can wreck a nation when holding power becomes more crucial than accomplishing major goals on behalf of your people. At a time when both nationalism and right-wing populism are making a grim comeback, Evita’s political message seems more relevant today than it probably did during its debut in London in 1978.

Performed by a large and talented cast inside the Orlando Shakes’ Margeson Theater, the quality of Webber’s music, the vocal talent and sharp choreography (by Kim Ball) on display here help make the cynicism of the show itself go down a little more smoothly — particularly since so much of the political machinations we see feel all too problematically real and depressing.

Where Can You See The Show?

Evita is now being performed at the Orlando Shakespeare Theater at 812 E Rollins St. in Orlando. Call 407-447-1700 for tickets and more information. The show had its opening night on Friday and the production continues through Oct. 6. Showtimes are at 7:30 p.m.