Pulse Remembrance: An Evening of Reflection and Promise

ORLANDO –It’s been 5 years since the devastating shooting massacre at a gay nightclub claimed the lives of 49 people at the nightclub known as Pulse.That horrific act of domestic terrorism shocked both the city and the nation.

No one in Central Florida has forgotten this. Next week, the City of Orlando and Orange County Government want area residents to come together to remember not only the people lost in that tragedy, but how it brought this community closer together in the days and months that followed.

What’s Happening On the Pulse Anniversary

On Monday, June 7 at 7 p.m., there will be a special ceremony titled Pulse Remembrance – Evening of Reflection and Promise. It’s going to be held at the Dr. Phillips Center for the Performing Arts as part of the Center’s ongoing Frontyard Festival, 445 S. Magnolia Ave.  Mayor Buddy Dyer and City Commissioners Patty Sheehan and Regina Hill will join One Orlando Alliance in an interfaith service with the LGBTQ+ community. The event will serve to create “pathways for healing as part of the five-year mark of the Pulse tragedy,” the city noted in a news release.
There will be a panel of LGBTQ+ people of diverse faith backgrounds during the event.
On Thursday, June 10 at 9 p.m. it’s United We Dance, a special celebration being held at Häos on Church, 123 W. Church St. Häos on Church, Hamburger Mary’s, and Pepe’s Cantina will celebrate the resilience of the community through music and dancing as part of the Pulse anniversary and a remembrance of the people impacted by it. 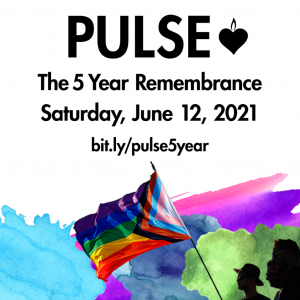 On Saturday, June 12, the City will mark five years since the Pulse tragedy, as a moment to reflect on the progress that’s been made since the shooting. This ceremony will also serve to honor the victims.
Observe the National Moments of Silence starts at 6 p.m., followed by the Pulse Annual Remembrance Ceremony at 7 p.m.

Remembering the Tragedy Known as Pulse

The tragedy happened on Sunday June 12 2016, when a gunman killed 49 people and injured 53 others inside Pulse, a gay nightclub near downtown Orlando. The assailant was later identified as Omar Mateen, 29. He was killed by Orlando police after a three hour standoff

In response, the city launched the One Orlando Alliance website with a list of acts of love and kindness for the local community, and Mayor Dyer and then-Orange County Mayor Teresa Jacobs encouraged residents and businesses to take part in a day of Acts of Love and Kindness that serve as a way to unite the entire community.

The Orange County Regional History Center responded by created its Expanded One Orlando Collection and Digital Gallery, featuring images of individual items collected at numerous Pulse memorial sites that were created in the days and weeks after the tragedy.

Curated pieces from the One Orlando Collection include community artwork and international support the city received following the tragedy.

Michael Freeman is an Orlando journalist, playwright and author of the book “Koby’s New Home”. Contact him at Freelineorlando@gmail.com.