Home /Online Bookstore
Freeline Productions markets several fictional works, in both paperwork and as Kindle eBooks. Order our books on Amazon.com or directly from us using Paypal. 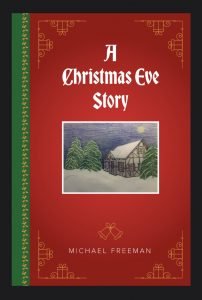 This book is available in a paperback edition on Amazon and as a Kindle eBook. The book follows the story of Tadeusz Lipman, who finds himself on Christmas Eve standing on the ledger of his 6th floor apartment, ready to jump as he listens to the angry pounding on his apartment door. When the door comes crashing open, Tadeusz leaps into the void. The novel picks up a year later, as another Christmas is approaching. It’s a story about ghosts, survivor’s guilt, redemption and the holidays. At times scary and at other times joyful, A Christmas Eve Story is about falling in love with the season all over again. So, grab some hot chocolate, relax on the couch next to your Christmas tree, and enjoy the spooky and uplifting world of A Christmas Eve Story. Buy via PayPal 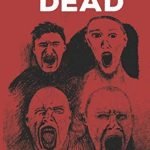 When I Woke Up You Were All Dead

Brandorff, a journalist, hasn’t left his tiny studio in days. He’s haunted by the photo of a smiling woman hugging her young son at a community celebration. And every sound in the hallway beyond his door sets off panic in his mind. “When I Woke Up” is a horrifying story about mob violence exploding when demands for justice reach a fever pitch, leaving Brandorff hidden away, an innocent man waiting to be tracked down.

OF CATS AND WOLVES 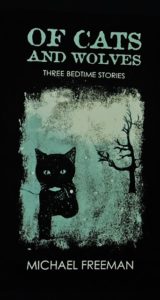 A collection of short stories with a unique political twist, “Of Cats And Wolves” merges a strange, dreamlike existence with the frequent intrusion of odd creatures and often terrifying situations. These “Three Bedtime Stories” include “Good Cat, Bad Cat: Feline Fairy Tales,” “Double Vision,” and “Through The Broken Glass.”

WAKING IN THE DARK 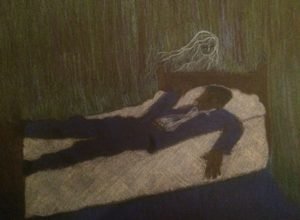 “Waking In The Dark” is a collection of six dark tales, based partly on the author’s dreams … and nightmares. The book explores themes that range from modern day Antisemitism and a rising tide of extreme nationalism, to sexual paranoia, and whether aging historic properties truly can harbor malevolent spirits. The stories include “Who Is Bill Topor?” about a man in a café who gets verbally harassed by two unemployed factor workers, unaware that they pose a far greater threat than just words; “The Golden Hotel,” about a historic hotel popular with ghost hunters; and “Succubus,” about a man who rents the wrong Oceanside cabin at the wrong time. 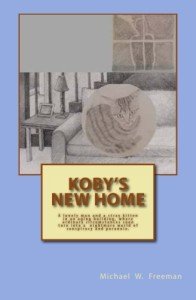 “Koby’s New Home” takes a sometimes humorous, often unsettling and scary look at economic dislocation. Having lost his job and now struggling to find a new one, William Grabinski has no choice but to rent a small, dirt cheap unit in an old, decrepit building. Feeling lonely and isolated there, he can’t resist adopting a kitten that cries at him from the building’s courtyard on a cold December day. It starts out very much like a heartwarming and sentimental story of a depressed man who finds comfort and happiness in caring for this sweet, adorable kitten. But it isn’t long before the book heads off in a much darker direction. Through a series of strange and sometimes ominous incidents, Grabinski becomes even more anxious about his life in that complex. He starts to believe the entire building is corrupt, even destructive. 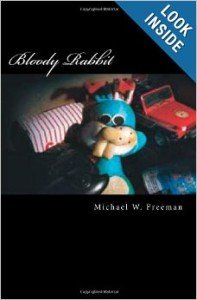 R.T. Robeson thought his life was comfortable and well-established — until an economic downturn claimed virtually everything he had, including his job, house and car. Now he’s riding the city bus to a neighborhood he might never have considered living in before, resting all his hopes on securing a tiny apartment that’s available. Not even the unit’s unsavory past discourages him from wanting to take it. One evening as Robeson is working as an usher at a local theater, he watches a hardcore punk band, Bloody Rabbit, perform a set of unsparingly nihilistic and defeatist. songs Robeson leaves the concert feeling depressed and weary. And when he gets back to that little apartment, the events inside those two rooms alter his life in horrifying ways. It puts Robeson on a far more dangerous and bleak path than he’d ever expected.

“The New Boarder” is a terrifying look at one man’s desperate attempt to escape from …. what? Late one night, 30-year-old Janus breaks into a panic, throws his belongings into a suitcase and flees his apartment. After driving for several hours, he abandons his car in a wooded area and rents a small furnished room in a boarding house. His escape has begun. This story reverses the traditional formula of the mystery novel, which typically reveals a shocking crime and then starts the hunt for a suspect. In “The New Boarder,” the reader knows who the suspect is, but has no idea what Janus has done. He wanted to escape. Instead he got trapped.