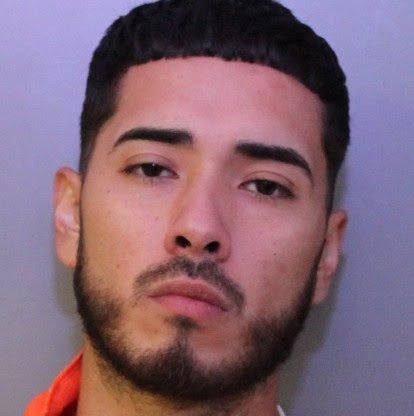 LAKELAND — Protestors gathered in Lakeland’s Munn Park on May 31 to express their anger and outrage over the killing of George Floyd, but the Polk County Sheriff’s Office responded by taking two people into custody, one accused of trying to incite a riot and the other with making online threats to kill.

“This lawful assembly was conducted in a confined area (the park), where it did not impede any flow of traffic, or disturb the everyday movement of other citizens in the area,” noted Carrie Horstman, the public information officer for the Polk County Sheriff’s Office, in her report on the arrest.

Why Did Sheriff’s Deputies Make Arrests After The Protests?

Horstman noted that after several hours at the park, a group moved outside the park grounds to the intersection of Massachusetts Avenue and E. Pine Street, where protesters began to block the intersection in front of the Lakeland Police Department.

Horstman singled out the activities by Guzman, saying he “began making statements to attempt to incite a riot.” The sheriff’s office said one witness provided a sworn recorded statement that Guzman told her he had been sprayed with mace in Orlando and now wanted to riot in Lakeland.

“The witness advised Guzman stated he wanted to ‘storm’ Lakeland Police Department,” Horstman noted. “Guzman was heard encouraging people to go into the streets, and helped initiate blocking the intersection. These statements were made in front of numerous people, and the language used was advocating violence and was intended to incite an immediate breach of peace.”

The protest then moved to the intersection of Memorial Boulevard and N. Florida Avenue. “In both intersections, protesters turned violent, as they blocked the flow of traffic, trapping vehicles in the crowd of people,” Horstman noted, while adding that things got thrown at cars and protesters refused to leave the area when given an order to disperse.

The witness told police Guzman was wearing a red mask and had no shirt on. Deputies, working with the Lakeland Police Department, were quickly able to identify that person as Guzman.

“Guzman’s actions and words helped encourage an immediate breach of peace, inciting a riot, wherein a large group of protesters acted defiantly and unlawfully,” Horstman reported, while noting that he was taken into custody on June 7 after an arrest warrant had been issued. Deputies also confiscated Guzman’s cell phone, a red vest, and a skull mask, “all of which Guzman was seen wearing during the incident by witnesses, all of which were located and collected by deputies,” Horstman reported, while adding that this investigation is “ongoing”

What Led To An Arrest For Making Threats?

Deputies made a second arrest, taking Carlos Fugarte, 28, of Lake Wales into custody and charging him with making written threat to kill, a class 2 felony. Horstman reported that this case started once the protestors left Munn Park and went in front of the Lakeland Police Department. At the time, law enforcement got a complaint from a citizen about a Facebook live video.

“In the chat section of the video, a user by the name of ‘Woodboy Los’ wrote ‘Go to Bartow and blow up the courthouse’,” Horstman noted, adding that the user was later identified as Fugarte. She added that under the name Woodboy Los, he posted a second message on his Facebook page stating “Polk county is next everybody be ready it’s a movie tonight in Polk County.”

Deputies later made contact with Fugarte at his Lake Wales home, and he admitted to having written both comments on Facebook, Horstman noted.

“Fugarte advised he and his friends didn’t like that people were setting fire to the businesses and stated he thought the courthouse was a better place,” Horstman reported. “Fugarte confirmed he wrote the comment about blowing up the courthouse, but advised he was not being serious, and that the comment was joke.”

However, the Polk County Sheriff’s Office didn’t see any humor in the comments, noting that “Fugarte intentionally used written electronic communication to transmit a threat of terrorism (by enticing someone to blow up the courthouse),” Horstman noted. She added:

“This was done in a manner that would allow another person to view the threat, and perceive it as a threat. The act of terrorism is defined as a violent act or an act dangerous to human life. Fugarte’s written statement was perceived by a citizen as a violent act that was intended to intimidate, injure or coerce a civilian population.”