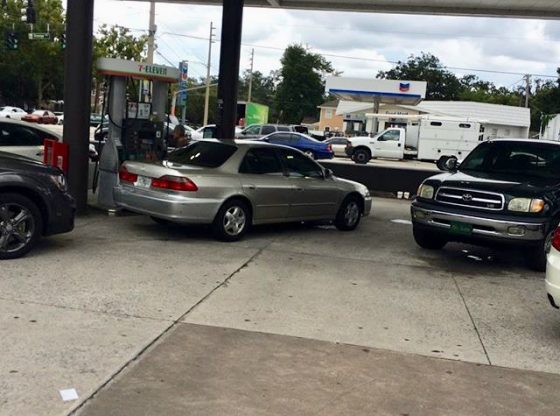 DAVENPORT — When Hurricane Florence and its deadly winds were approaching the North Carolina coast, the state government quickly issued a warning that it would be illegal to start charging high prices for goods and services, including gasoline at the pumps, during natural disasters, and those who did so would face criminal prosecution.

North Carolina Gov. Roy Cooper declared a state of emergency because of Hurricane Florence, activating the state’s anti-price gouging laws, and noting the state would carefully monitor any sharp price increases aimed at desperate consumers fleeing the ravages of the storm.

This devastating hurricane arrived at a time when gasoline prices are already on the rise, and are likely to keep going up in 2019. The U.S. Energy Information Administration just released its Short-Term Energy Outlook (STEO) for August, forecasting that it will cost Americans on average about $2.76 a gallon through 2018, while gasoline prices should average $2.82 per gallon for all of 2019, an increase of six cents a gallon.

As prices at the pump take an increasingly sharper and sharper bite out of the wallet of consumers, one Central Florida sheriff is using a recent arrest to highlight another concern: diesel fuel theft, and how that hurts consumers as well.

Polk County Sheriff Grady Judd noted that his deputies had just arrested Donald Fowler, 47, of Mulberry, and charged him with stealing diesel fuel from a local agricultural business owned by the family of Florida’s Agriculture Commissioner.

“Diesel fuel thefts are an on-going problem in our agricultural areas,” Judd noted. “Our deputy did a great job preventing another theft from happening.”

How Did This Case Begin?

In her report on the arrest, Sherrie Morgan, public information officer for the Polk County Sheriff’s Office, noted that it all began with a simple traffic stop on Sept. 9.

The Polk deputy had pulled over Fowler’s vehicle after noticing that his SUV, which was hauling a trailer through the area of 80 Foot Road near Alturas and Homeland, had no tag or lights. The detective made the stop and then discovered that Fowler was operating on a suspended license.

The detective did some further digging, and “It turns out there was an illegal purpose for this haul,” Morgan noted. “Attached to Fowler’s trailer was a 500 gallon plastic tank and in the back seat of his vehicle was a transfer fuel pump device, a pair of bolt cutters, a pipe wrench and a glove.”

Fowler also had two active warrants for not appearing in court and for not showing up for work release, so he was taken into custody where, Morgan noted, he “admitted being in the area to steal diesel fuel.”

He was taken to the Polk County Jail, facing multiple charges, including:

The next day, Fowler was also charged with burglary, petit theft and trespassing, and he’s now being held without bond.

How Does This Impact Polk’s Citrus Industry?

After Fowler was arrested, the Polk County Sheriff’s Office received a call from Putnam’s Citrus Grove in Bartow. The citrus business reported that someone had broken inside a pump shed and removed 60 gallons of diesel fuel, the sheriff’s office noted.

While Fowler was in custody that day, deputies followed up with Fowler about this report.

“He admitted cutting the chain to the shed at the business with intent to steal the diesel fuel,” Morgan wrote in her report. “He’s charged with burglary of a structure, petit theft and trespassing in an orange grove.”

The Putnam’s Citrus Grove business belongs to the family of Florida Agriculture Commissioner Adam Putnam, who ran unsuccessfully for governor of Florida this year and is a former Republican congressman who represented Polk County.

The theft of diesel fuel from an agricultural business can hurt that one company, their customers, consumers at large and the entire state economy if it continues. It’s been well documented that the theft of any businesses’ products leaves less inventory for legitimate customers to buy, which makes it that much harder for the business to recoup its production costs. It also becomes more challenging for them to pay vendors and employees and to meet other obligations they have financially.

And if they’re forced to increase production to replace stolen inventory, that weakens their overall profits even more.

That can also result in higher costs for consumers, something no one wants at a time when gas prices are already increasing.

And it isn’t just agricultural businesses concerned about diesel fuel theft. This is also a serious headache for the trucking industry. Trucking companies face a great loss of money when the diesel fuel they rely on is stolen. The website FuelLoyal.com reports that 8 percent of all diesel fuel is stolen by either drivers or thieves.

Consumers, beware: diesel and other forms of energy theft are a serious concern, and can hurt your wallet over time.

Anyone with information about suspected diesel or gas station thefts in Polk County can contact the Polk County Sheriff’s Office at 863-298-6200 to report it.

We can also fight fuel theft and do our part to reduce Pain at the Pump.

Orlando Exhibit on the Pulse Massacre Shows a Community Coming Together
“Pogrom,” a Disturbing Look Back at a Horrific Chapter in History