“Pogrom,” a Disturbing Look Back at a Horrific Chapter in History

Home /Media/“Pogrom,” a Disturbing Look Back at a Horrific Chapter in History 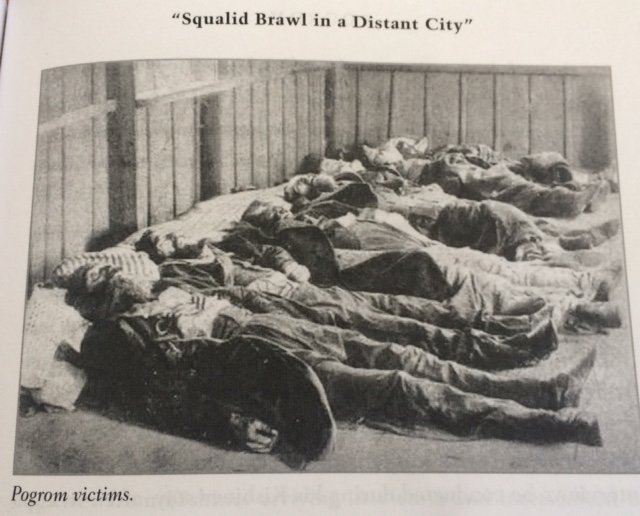 ORLANDO — Steven J. Zipperstein’s new book “Pogrom: Kishinev And The Tilt of History,” provides a detailed look back at a moment in history that largely seems to have been forgotten today — even though the incident that happened over three days captured worldwide attention, was heavily covered in the American press, and led to a long debate about in this country about the pursuit of justice and a strong push for civil rights for black Americans.

And yet at the same time, the word Kishinev — a city then in Russia — likely doesn’t evoke dark images in the minds of people today, of massacres, rapes and brutal killings.

Perhaps if more people discover this book, that could change.

The historical novel by Zipperstein, a professor of Jewish culture and history at Stanford University and recently published by Liveright Publishing Corporation, covers an atrocious chapter in history, including the events that led to three days of extreme violence that left 49 Jews dead and 600 raped and wounded. It happened in April, and the trials of the rioters got underway in December.

And in the course of those eight months, the American press covered the pogrom heavily, and it also inspired novels, stage plays and even an epic Jewish poem.

And today, few people beyond Jewish scholars and world historians appear to remember it. And that includes me; I found this extremely detailed and absorbing book to be a startling revelation.

What Event Does The Novel ‘Pogrom’ Cover?

Say the word Pogrom — which came to mean mass violence against Jews as a deliberate persecution of a specific ethnic or religious group , often approved or condoned by the local authorities — and those knowledgeable in history are perhaps most likely to think of Kristallnacht, the savage pogrom against Jews throughout Nazi Germany on Nov. 9–10 1938. Carried out by SA paramilitary forces and German civilians, it included the beatings and murders of innocent Jews, the burning of synagogues, and the complete destruction of Jewish stores.

Kristallnacht, also known as the Night of Broken Glass because of the shards of broken glass that littered the streets from the windows of Jewish-owned stores and synagogues, has been well-documented by historians of the Holocaust, including here in Greater Orlando at the Holocaust Memorial Resource & Education Center of Florida in Maitland.

The Kishinev pogrom, though, had noting to do with the Nazis — and in fact Adolf Hitler was only 20 years old when it happened in 1909. And what’s most startling about Zipperstein’s book is the unsettling and ominous way that so many of the same arguments used during Kristallnacht — that the Jews brought the violence on themselves through their behavior — were front and center in this savage assault on this particular community of Russian Jews.

And if the Nazi-run German press seemed to openly encourage the Kristallnacht assaults, the Russian press played a similarly appalling role in the Kishinev pogrom.

As Zipperstein notes in his book, prior to the Holocaust, the word that came to define intense brutality and hatred of Jews was, in fact, Kishinev.

And the very word Pogrom was usually applied to anti-Jewish violence in the Russian Empire in the late 19th and early 20th centuries. As Zipperstein wrote in his preface:

“This book explores a dreadful moment — albeit by no means worse than many others at more or less the same time — that would define for many Jews and others, too, the contour of Jewish fate in the half century before the Holocaust. Prior to Buchenwald and Auschwitz, no place-name evoked Jewish suffering more starkly than Kishinev.”

He added that in the early 40s, as Jews were being sent from all over Europe to Nazi-run concentration camps, “(I)t was commonplace for Jews to insist that Kishinev had in its day garnered more attention than Hitler’s war against the Jews.”

And yet the incident barely registers today as a critical moment in history — which is what makes Zipperstein’s book so invaluable as a documenting of this insidious pogrom, and the role it played in focusing attention on the extremes that anti-Semitism would take.

What Caused the Kishinev Attack?

In April 1903, Kishinev was a fairly cosmopolitan city in Russia (today it’s called Chisinau, and has been a part of Moldova since the collapse of the Soviet Union) with a Jewish population that may have surpassed 47 percent. Zipperstein’s book paints a picture of a city doing well economically, with a mayor who was friendly to the local Jewish community.

So what happened? How did it lead to an explosion of mob violence on April 19 1903?

“Pogrom” covers the weeks leading up to the attack, which happened on Easter day, and how a Russian-language newspaper that was virulently anti-Semitic, Bessarabetz, routinely published articles with headlines like “Death to the Jews!” and “Crusade against the Hated Race,” and how extreme right-wing groups fanned the flames of this hatred.

Then in April 1909, a Ukrainian boy who was not Jewish was found murdered in a nearby town, and a girl who committed suicide by poisoning herself was declared dead in a Jewish hospital. The Bessarabetz newspaper ran an article suggesting that both children had been murdered by the Jewish community so the victims’ blood could be used to make matzo for Passover.

The pogrom began on April 19 after congregations were dismissed from church services on Easter Sunday, and Zipperstein covers the grisly violence that captured worldwide attention: not only the killings and rapes, but the fact that 700 Jewish houses were destroyed and 600 stores were vandalized (as was the case with Kristallnacht, not a single gentile home was damaged.) The details in Zipperstein’s book are depressing, demoralizing and difficult to get through, including the accounts of women who had been brutally raped by multiple men, then left alive to endure the continued trauma of their assault.

What seems most remarkable in reading the chapters after the one detailing the pogrom itself is just how much attention this attack received, including from the Hearst Press, which had correspondents at the scene in the days immediately after it happened.

Zipperstein also explores the role that Pavel Krushevan, the publisher of Bessarabets and a notorious anti-Semite, played in this attack, and he looks at the response of the Jewish community at the time. That includes the poem “In The City of Slaughter” by Chaim Nahman Bialik, who visited Kishinev right after the pogrom and documented the suffering of the Jewish victims in often harrowing detail.

“Upon the mound lie two, and both are headless—
A Jew and his hound.
The self-same axe struck both, and both were flung
Unto the self-same heap where swine seek dung;
Tomorrow the rain will wash their mingled blood
Into the runners, and it will be lost
In rubbish heap, in stagnant pool, in mud.
Its cry will not be heard.”

The poem would generate considerably controversial years later for its implied criticism of the victims, particularly the men, for seeming cowardice and weakness and for not defending themselves and their women — criticism that would resurface for Jewish victims of the Holocaust as well.

But Zipperstein also documents how this 1909 pogrom led to an increased amount of activism in the U.S., to organize and work for the freedom not just of Russian Jews, but also blacks in the United States. For a book that’s only about 200 pages long, the author covers quite a bit of fascinating territory.

“Pogrom: Kishinev and the Tilt of History” is an excellent reminder that there are dark chapters of history that have largely been lost in the public consciousness, simply because too much time has passed and so many other catastrophic events have since eclipsed them.

But it’s also a painful lesson of how tragically history repeats itself. Despite all the press coverage of Kishinev, despite the protests and organized reactions and political condemnations of the incident, none of it prevented Kristallnacht or the Holocaust from occurring.

Which is why historical non-fiction books like Zipperstein’s are the ones everyone should be reading, not only for his sharp writing and researching skills, but also for the need to never, ever forgot, no matter how far back an incident goes.

And while Zipperstein doesn’t cover this topic in “Pogrom,” the timing of a historical book about religious bigotry and violence in Russia couldn’t be better, considering how often Russia in in the news today for the Russian governments interference in the 2016 U.S. presidential election, designed to increase political instability in the United States and weaken the country.

And with the warning in August by Director of National Intelligence Daniel Coats that the U.S. intelligence community continues to see a pervasive messaging campaign by Russia in 2018 to weaken and divide the U.S., there are even more reasons today to read “Pogrom.”