Phantasmagoria Glides into the Christmas Spirit This Year

Home /Entertainment/Phantasmagoria Glides into the Christmas Spirit This Year 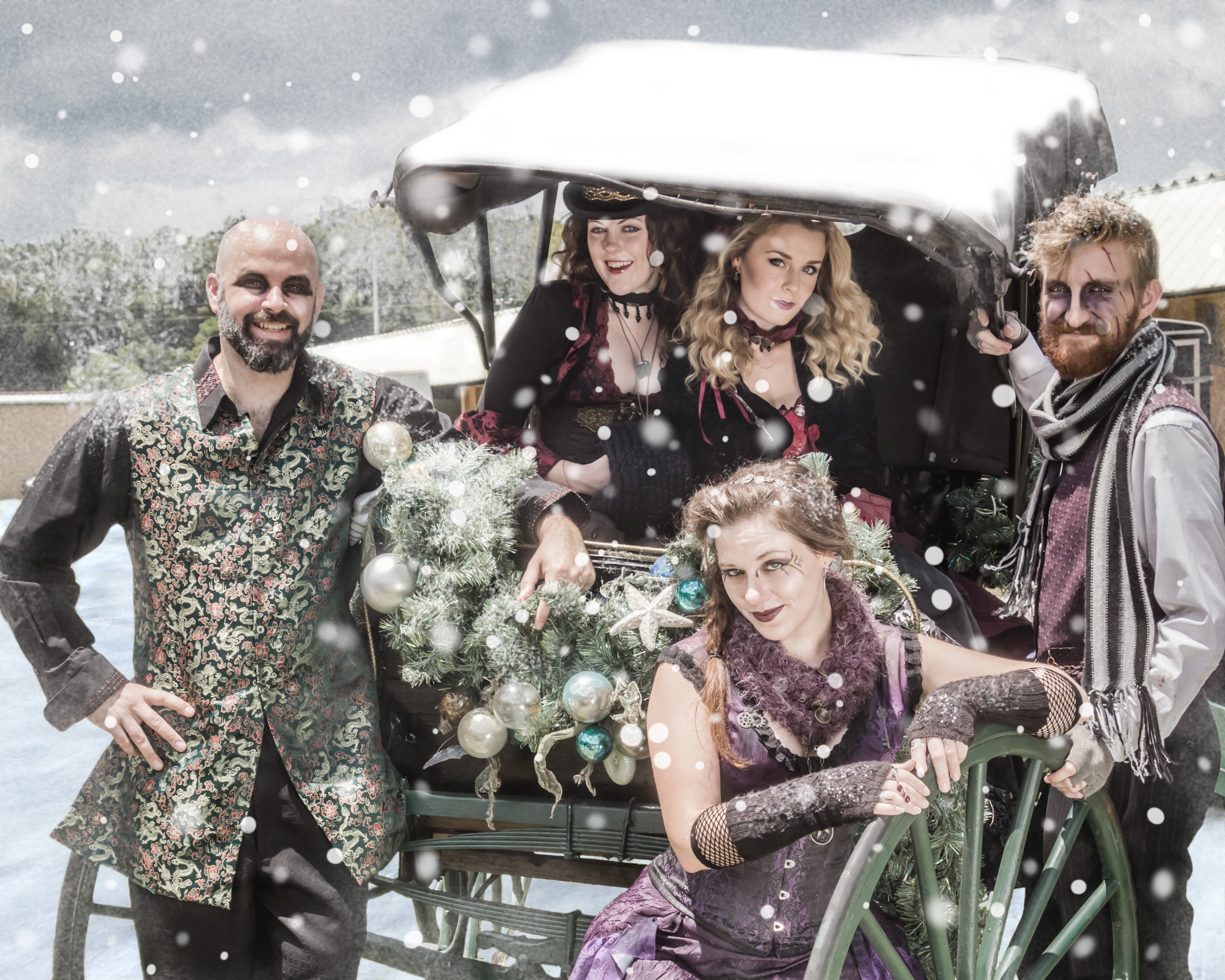 ORLANDO — As an entertainment troop, Phantasmagoria sure gets around.

The group of richly talented circus-like performers, whose members include mimes, dancers, acrobats, and puppeteers, have been a staple in the Central Florida area for nearly a decade, particularly during the Halloween season, when they’ve found a happy home at the Lowndes Shakespeare Center entertaining audiences by recreating classic tales of terror from centuries-old literature.

Now hold it, you might be thinking: did you say Dickens? Isn’t he the British author who wrote “Oliver Twist,” “Great Expectations,” “A Tale Of Two Cities,” and other brilliant novels? Not exactly the stuff of horror lit.

But keep in mind that Dickens also loved a good ghost story. In fact, probably his most popular and enduring work, “A Christmas Carol,” is definitely a story with multiple ghosts in it. And that may be why Phantasmagoria’s creator and playwright, John DiDonna, has chosen to adopt A Christmas Carol again this year as a Phantasmagoria production.

And considering their skills at telling scary tales on stage, who better to actually recreate the Dickens holiday classic?

How Will Phantasmagoria Entertain During the Holidays?

The Phantasmagoria performers will be quite busy this December, starting with a “Phantasmagoria Victorian Christmas Celebration” at Higgins House Victorian Bed & Breakfast, 420 S. Oak Ave., Sanford, to celebrate the holidays early.

DiDonna said he’s driven past the quaint bed & breakfast many times, and thought about how it looked like the ideal venue for some live performances. On a whim, he stopped by to propose the idea — only to discover that the folks who run Higgins House knew about Phantasmagoria and had been thinking about reaching out to them about a collaboration. Small world.

Earlier this year, Phantasmagoria did a Summer Solstice event at the bed & breakfast, followed by guided tours there around Halloween, with spooky happenings going on in the rooms. Now they’re ready to help usher in the Christmas season there.

During their performances at Higgins House, Phantasmagoria will help guests revel in holiday splendor with music, Holiday Ghost Stories, magic and more. Guests can also enjoy a Victorian Buffet of desserts and delights along with Victorian drinks to warm a chilled heart.

How is Phantasmagoria Approaching Charles Dickens?

Then audiences can celebrate the 2018 Holiday Season as Phantasmagoria returns with its unique adaptation of Charles Dickens’ classic holiday tale. “Phantasmagoria: A Christmas Carol, A Ghost Story of Christmas” is a production that features dance, puppetry, projections, music and storytelling.

DiDonna has been performing A Christmas Carol for years. One of his earlier versions of the Dickens perennial was “Dickens By Candlelight,” a production featuring three actors who performed all the roles in this story — in a dark room, lit only by candlelight.

Then in 2017, DiDonna shifted and merged the Phantasmagoria entertainers with the Dickens story, creating the first “Phantasmagoria A Christmas Carol, A Ghost Story of Christmas.”

At the time, he explained to Freeline Media that it felt like the right opportunity to move in a new direction.

“I loved doing ‘Dickens by Candlelight.’” DiDonna noted in October 2017. “After this past year we (the cast) all looked at each other and went ‘My God, we have done this for 8 years straight!’ and we needed a little break.”

And keep in mind that last year’s production sold out — fast.

“We are doing it again because we loved doing it last year,” he said. “We hope to make it a tradition that we do every year. And we’ve changed it up from last year, because that’s what we do.”

And the story is ideal for the Phantasmagoria approach, DiDonna noted, because of the often grim nature of Scrooge’s saga can get overlooked in some lighter holiday productions.

“We love just how dark some of it really is, especially when we get to the Ghost of Christmas Future section,” he said. “As we were rehearsing it, what we discovered was how much the storytellers propel the story to teach Scrooge a lesson, and that Scrooge will be redeemed. It’s important to us to make sure that he does get redeemed.”

And their production will also emphasize something else.

“Another surprising thing is how funny it is,” DiDonna said. “Dickens had a rich sense of humor. As we rehearsed this, we discovered how funny the story actually is.”

And they also plan to deliver on something else: the sentimentality that audiences love, particularly during the story’s finally scenes.

“As it begins, it is our first snow ever that we’re experiencing — with love,” he said. “The Phantasmagoria characters are experiencing the season, just like Scrooge does. And the ending was perfect for that.”

“Phantasmagoria A Christmas Carol” will be performed on:

You can preorder tickets online. Admission is $20 for the general public, and $30 for VIP admission, which includes drink tickets for alcoholic beverages, a souvenir and a Photo Op with the cast.

Law Enforcement Catches Up with Fugitive From Justice in Domestic Violence Case
The Growth of Smart Home Technology: Living in a Smarter House