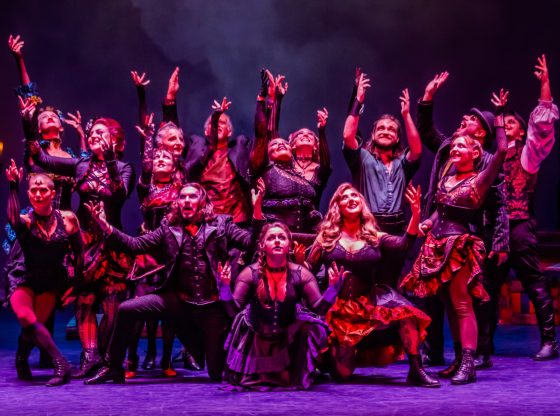 ORLANDO — Just as productions of A Christmas Carol are reliably available at community theaters across Central Florida every December, it’s also true that this month, Phantasmagoria has arrived like an old friend, ready to join you in celebrating the Halloween season.

Phantasmagoria XIII: Poe, Through The Tales Darkly is the remarkable 13th year of this enduring horror-themed spectacle, which had its debut at Dr. Phillips Center For The Performing Arts on Thursday, where it will stay for two more performances before touring across Central Florida through Oct. 29.

Anyone who has seen the Victorian Horror Troupe in the past knows what to expect, and if you’re new to Phantasmagoria, here’s the scoop. This circus-like group of actors, dancers, acrobatic performers, puppeteers and storytellers reenact tales of ghosts, madness, murder and terror from literature’s best known — and, quite often, very obscure — horror authors.

This year, the troupe took a unique and appealing twist, devoting the entire 90-minute production to the works of one of horror’s most acclaimed writers, Edgar Allan Poe, recreating some of his most chilling stories, and some of his haunting poems. If you’re a major Poe fan (as I am), you’re likely to find this to be one of Phantasmagoria’s most riveting productions yet.

Created by local actor, playwright, director and theater professor John DiDonna, Phantasmagoria has always been about one grand aim: to demonstrate that horror can work just as effectively on the stage as it can in literature or cinema. The Victorian Horror Troupe is a bit like a group that hides in the dark shadows of your dreams, emerging to encourage you to explore with them the horrors of the past, captured on the written page by writers who either remain highly acclaimed a century later, or have largely been lost to history and forgotten.

Staged horror, minus the kind of special effects that filmmakers and their computer-generated imagery can easily create, works closer in spirit to old-time radio programs such as Suspense and Lights Out, which asked the audience to use their imaginations in order to become fully engrossed in the slow-building terror. Phantasmagoria XIII: Poe, Through The Tales Darkly amply demonstrates that this technique can still work as effectively as any expensive CGI horror film.

There are three ingredients in Phantasmagoria XIII that make this one so effective. One is the quality of the actors, who bring to these Poe classics a high degree of humor, pathos, panic and sometimes outright menace. Each cast member has the ability to fully engross you in their stories, and to have you laughing one minute, then feeling a cold hand touching the back of your neck a second later.

The second is the production’s reliably efficient use of graphic illustrations projected against a huge screen at the back of the stage, which create a visual setting for each story: the home of the deeply disturbed narrator of “The Tell Tale Heart,” the dank castle where Montresor lures Fortunato into a private wine-tasting excursion in “The Cask of Amontillado,” and very effectively in a visual retelling of Poe’s poem “The Bells.” This is a poem that gets darker and darker as it shows bells as a source of holiday nostalgia, as a source of joy during events like weddings, then a source of misery and terror as they become intolerably loud and almost hostile. The visuals in this one are striking, as is the image of the beating heart hidden under the floorboards in “Tell Tale Heart.” These illustrations has been a cornerstone of Phantasmagoria’s eerie charm from the start.

The third ingredient: horror is only as good as its source material, and DiDonna chose wisely this time, I believe, in focusing entirely on Poe’s unique brand of unsettling, insinuating horror.

The performers read the Poe stories verbatim, while acting out the numerous roles. In “The Tell Tale Heart,” DiDonna himself takes on the role of the narrator obsessed by the elderly man he lives with, particularly his large “vulture-like” eye, until he concludes that killing the man is the only way to escape it. The story has its dramatic climax when two local constables knock on the narrator’s door in the middle of the night after neighbors complained about hearing screams coming from the house, and the cast did a memorable job building the suspense on this one.

The same can be said for their recreation of Poe’s story “The Masque Of The Red Death,” where Prince Prospero and a thousand other nobles take refuge in a walled abbey to escape the Red Death, a hideous plague that leads to gruesome symptoms including sharp pains and profuse bleeding. Their reenactment of this story highlights another one of their strengths: life-sized puppets that are as gruesome to look at as they are quietly threatening to everyone around them.

Phantasmagoria has called this production “The perfect way to usher in the Halloween season,” and I couldn’t agree more. Stylish, eerie, ghoulish and funny, the talent these actors bring to the show perfectly matches the high literary quality of Poe’s grim writings.

Where Can I See Phantasmagoria XIII?

Phantasmagoria XIII will be performed at Dr. Phillips Center tonight and Saturday before moving on to:

For ticket links and more information about these shows, log on to www.PhantasmagoriaOrlando.com

These shows are well worth seeking out, having entertained Central Florida for more than a decade around Halloween, at the Orlando International Fringe Theatre Festival, and more recently, around Christmas with their unique version of A Christmas Carol.