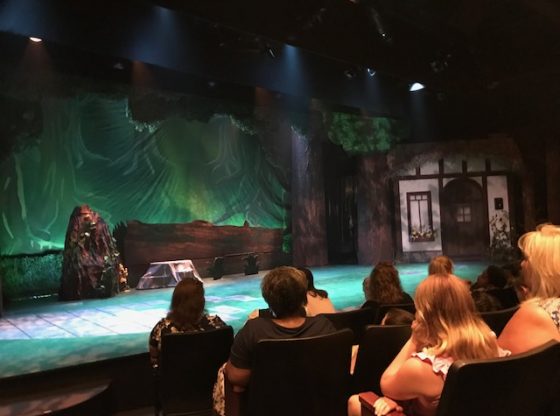 ORLANDO — When the Brothers Grimm set out to write their legendary fairy tales, they were clearly not fans of sugary sweet and sentimental tales. One of their best known stories, Snow White, is filled with absolutely horrific images, as we follow the desire of a vain and jealous evil stepmother wanting to kill the one person whose beauty surpasses her own, that of the lovely child Snow White.

When Walt Disney immortalized the story in its 1937 feature length animated movie, their writers added tons of light humor and irresistible sentimentality to the story — while leaving in just enough of the terror to keep it suspenseful and emotionally gripping, from the huntsman ordered to carve out Snow White’s heart to her terrifying escape into the dark woods, and the Evil Stepmother’s transformation into an old witch. When you’re 5 years old, this is heavy stuff indeed.

As part of their ongoing commitment to first rate live children’s theater, the Orlando Shakespeare Theatre is now presenting its own production of this classic fairy tale, adopted by their playwright Brandon Roberts. While sticking close to the original story, this version is far closer to Disney than the Brothers Grimm in tone and approach. But more importantly, it puts its own stamp on the Snow White story through a very energized effort to involve the young audience as much as possible.

The best children’s theater often operates on two levels: in the first, we get material designed to entertain and charm the little ones in the audiences, and then secondly, it also operates on a level that adults in the audience can appreciate — but in a different way. Roberts’ top tool in this respect is humor: the cast of four go out of their way to play up the laughs as much as possible. The casting is ideal: Aja Grooms is the high-pitched voice Snow White and Kristin Shirilla is a Stepmother who is unquestionable vain and cranky, but more a bit more clumsy and incompetent at doing away with the competition than what Disney offered.

The story is told through a narrator, a Keeper of Tales played by Walt Kmiec (who also plays the Prince at the end), who accidentally picks up the wrong books at the beginning, starting with Cinderella (Oops!) until Snow politely points out that he’s got the wrong story.

But the real energy and zest in this one belongs to Eric Fagan, who has a blast playing virtually every other male role in this production, from Snow White’s father the king to the Stepmother’s wall mirror, to, initially, the dwarfs.

Yes, all seven of them.

That makes for one of the play’s funniest scenes, as Fagan struggles in his efforts to create seven different dwarfs on stage — at the same time. He finally abandons the idea, and wisely selects seven dwarfs from the audience — young faces who seemed only too happy to be getting up on stage and joining the cast. The production works hard to involve the young audience in what’s going on, and their efforts pay off nicely.

Where Can You See Snow White?

Snow White is a fun production, bolstered enormously by a cast that seems to be having a grand time, especially the very high-energy Fagan. And there’s enough humor in this hour-long production that I can’t imagine very many adults feeling like it’s a chore to take the kids to see this one.

Snow White is being performed now through July 28 at the theater at 812 E. Rollins St. in Loch Haven Park in Orlando. Call 407-447-1700 for tickets or more information.