ORLANDO — Ghostly figures are roaming across the stage, their faces covered entirely in black. They shift stealthily toward the audience until the Three Witches appear,  and decide they’ll meet again with a general who is now the Thane of Glamis. We’re in a supernatural world, of witches, spirits and black magic.

But then reality emerges, with soldiers engaging in fierce combat. That general, Macbeth, and fellow soldier Banquo have defeated the forces of Norway and Ireland on behalf of King Duncan, who lavishes praise on Macbeth for his bravery.

Then the world of reality and the supernatural start to mix, once Macbeth and Banquo meet up with the Three Witches, who offer a prophecy that Macbeth will “be King hereafter” — setting in motion the dark, bloody series of events that bring Macbeth to the throne.

If you love Halloween season for the high intensity scares available at attractions like Universal’s Halloween Horror Nights, you might not think the idea of an evening watching Shakespeare will be all that engrossing. But there’s no question that the new production of Macbeth at the Orlando Shakespeare Theatre is the ideal entertainment for this season; it’s an intensely gripping portrait of how power corrupts, and this stellar production featuring witches, ghosts, the massacre of an innocent woman and her little children, and a spectacular beheading truly dispels the notion that Shakespeare is slow-moving or dull stuff.

Seriously, if you think that Shakespeare’s writing is, oh, you know, so wordy and all, fear not. This production, masterfully directed by Irwin Appel, places so much emphasis on visual effects and sound (a hallmark of Orlando Shakes productions) that for long stretches the sound could go off entirely, including the actors’ voices, and it would still be easy to follow the story without a single word being spoken. Macbeth is without a doubt one of the finest productions the Orlando Shakes has done in a long time.

How Does the Orlando Shakes’ Macbeth Work as Horror Theatre?

If you mainly associate horror with movies, you’re missing out on just how effective theater can be in recreating an atmosphere of terror and bloodshed. Are the special effects equal to what you find in horror movies today? No, but that doesn’t much matter. Theater asks its audience to use their imaginations more vigorously, and with Appel’s creative direction and some truly sharp performances by an outstanding cast, the horrors of Macbeth’s rise to power draw you in and maintain a tight squeeze on your senses.

In fact, theater and horror have a long tradition, dating all the way back to 1897, when French playwright Oscar Metenier bought a theater in Paris’ Pigalle district to create The Theatre du Grand-Guignol, or productions based on horror, gore, mayhem and fear — Fear of ‘the other,’ fear of the unknown, and fear of the foreign, with corpses piling up on stage — all themes reflected in Shakespeare’s bloodiest play.

Macbeth’s mix of political drama and the supernatural works quite spectacularly in this one, once Lady Macbeth convinces her husband that killing Duncan is the surest way to guarantee he becomes king. While that murder happens offstage, one of the play’s most eerily satisfying moments is watching Macbeth and Lady Macbeth after the grim deed, washing the blood from their arms. After that, Macbeth’s paranoia deepens; if he was so easily willing to kill a king he once revered, couldn’t others previously loyal to him — such as Banquo — become potential assassins as well?

Three of the scenes stand out: one is where Macbeth celebrates after he’s sent assassins to kill Banquo, and is told there’s a special seat at the dining table reserved for him. Only, he finds someone else sitting there. As Banquo’s ghost rises to haunt and taunt him, his subjects quickly recognize that something is deeply wrong with their new king.

The second comes when Macbeth learns his rival Macduff has fled to England and orders Macduff’s castle to be seized and his wife and children slaughtered. The moment when Lady Macduff gets surrounded by killers and desperately clutches both a tiny baby and the young son holding onto her in terror is one of the most harrowing moments.

And the final climactic battle between Macbeth and Macduff is stunning as well, especially since Macbeth, having been told by the witches that he can’t be killed by any man born of woman, confidently toys with his enemy, tripping and humiliating him several times, as if sadistically prolonging Macduff’s anticipated slaying. It’s only when Macbeth learns a secret about Macduff’s birth that his confidence plummets and he sets himself up for the play’s riveting, spellbinding ending.

Why Is Orlando Shakes’ New Macbeth So Effective? 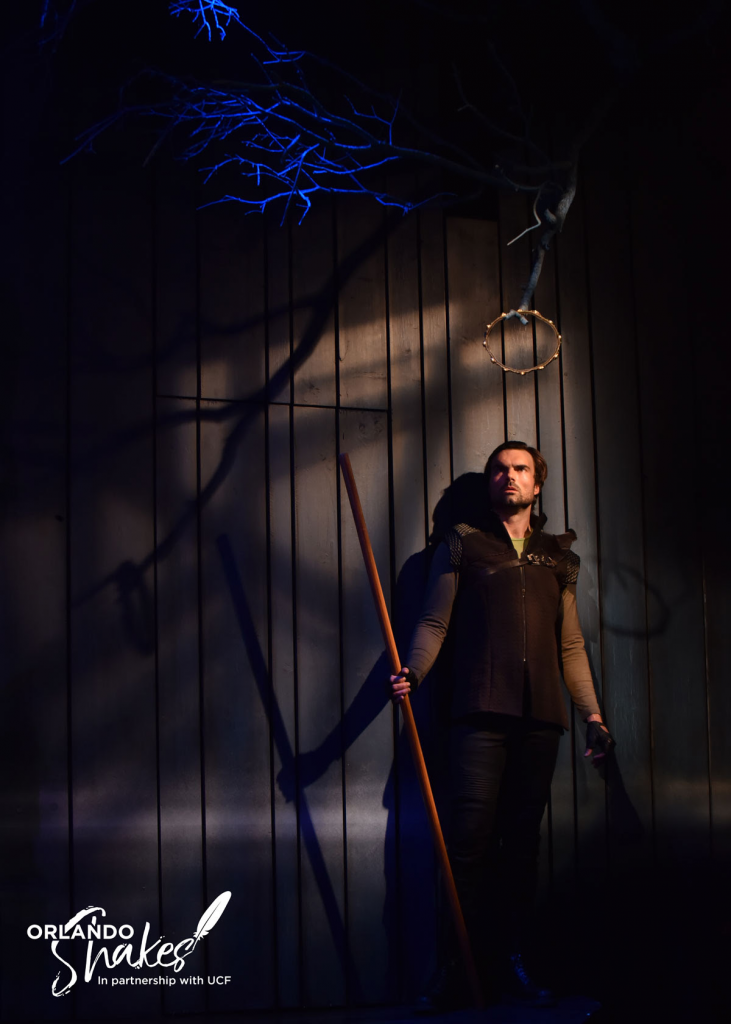 Appel does a captivating job shifting back and forth between the supernatural and the real world, to the point where it’s tough to decide which seems more disturbing and terrifying. And there are some engrossing performances to draw you into Shakespeare’s nightmare world.

Christian Ryan does a fine job in the lead role and gets better and better as Macbeth becomes more convinced of his own invulnerability, making him arrogant and not at all concerned about how much blood he sheds to stay in power. There’s something sinister about Ryan’s Macbeth from the start, and he becomes more menacing as the play goes on — not to mention more conceited and flippant. He’s truly a horror theater version of Macbeth.

There are also fine performances by Walter Kmiec, who is particularly good as the stone-faced ghost of Banquo; Suzanne O’Donnell as Ross, who has a powerful moment when she struggles and hesitates to tell Macduff that his family has been butchered; and Lorena Cohea, who in a brief scene is heartbreaking as Lady Macduff.

But I was most impressed by two others. Lucy Lavely does a sensational job as Lady Macbeth, portraying her at first like a giddy teen wildly in love with a guy on the football team, and eager to make sure he remains their star player. She’s especially good once Macbeth’s guilty conscience starts gnawing at him and Lady Macbeth needs to cover their tracks.

I also marveled at the powerhouse performance by Jak Watson as Macduff, turning him into a powder keg that always seems seconds away from erupting into a fiery emotional explosion — starting from the moment when Macbeth tricks him into “discovering” King Duncan’s lifeless body. Watson has some of the show’s more arresting moments: when his simmering rage is suddenly replaced by the tortured anguish of learning his family has been murdered or during his final confrontation with Macbeth. When that inner rage boils over and comes out full force against the king, we’re right there with him.

Horror may be viewed by some as a relatively crude and low-brow genre, but it doesn’t have to be. The Lowndes Shakespeare Center is actually the place to be this Halloween season, offering not only an effectively eerie production of Macbeth but also the horror anthology Phantasmagoria, both operating as smart and creative versions of genuine horror theater.

Where Can I See Macbeth?

Macbeth is being performed at the Orlando Shakespeare Theatre now through Nov. 24. The theater is at 812 E. Rollins St. in Loch Haven Park. To learn more or to buy tickets, call the box office at 407-447-1700.

This production is being shown on Wednesdays-Sundays at 7:30 p.m., with Wednesday, Saturday and Sunday matinees at 2 p.m.