Orlando Shakes Kicks off its Cabaret Series in Style

ORLANDO — Listening to singer Michael Andrews perform the classic Broadway hit “Cabaret,” crooning to the audience at the Lowndes Shakespeare Center that “Life is a cabaret, old chum, come to the cabaret,” it became quite obvious this moment amounted to more than just a revival of a popular song. Andrews, a popular performer, was helping to advertise the start of the Orlando Shakes’ Courtyard Cabaret Series, which continues through next spring.

The series kicked off over the weekend with Andrew’s 20th Century Swing & Soul Revue, with Andrews and his band Swingerhead taking the audience through some big band and swing versions of classics by Frank Sinatra, Bobby Darin, Dean Martin and many others, while his special guest Ebony Carlson delivered soulful moments during the concert, giving us her soaring renditions of hits by Aretha Franklin, Tina Turner, Diana Ross and Ella Fitzgerald.

It was a special day for the Orlando Shakes, which spent the morning celebrating an Open House to mark the kickoff of their Season 34, which starts next month with their production of the comedy Noises Off. The Open House included tours of the Lowndes Shakespeare Center, a room filled with their best known props and costumes, lighting and sound demonstrations, and one day only discounts on tickets and subscription packages.

Then it was time to swing. 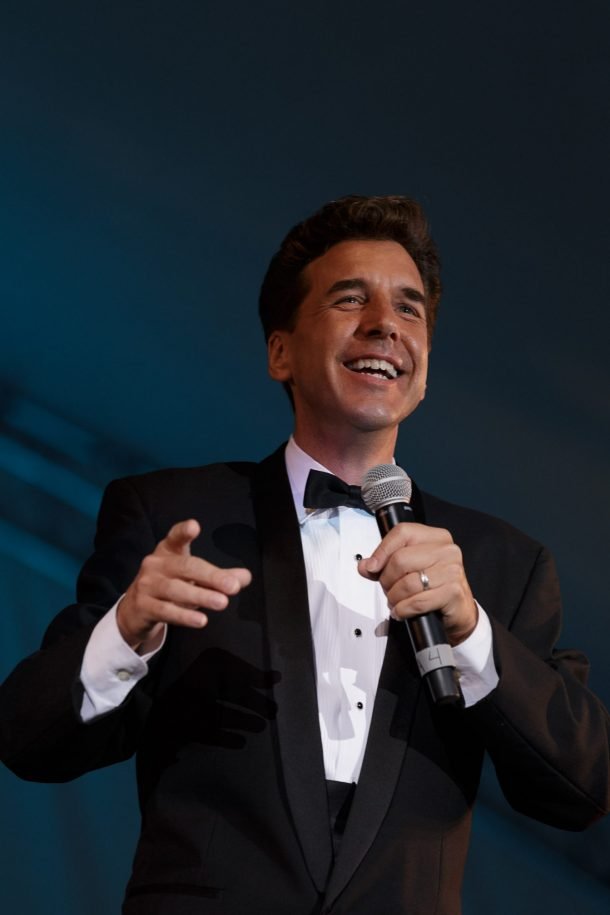 Performing inside the Margeson Theater, Andrews had a grand time singing classic swing and Broadway tunes for a near-full house audience, from popular hits such as “Mack The Knife” and “Splish Splash” to Sinatra standards such as “The Lady is a Tramp.” He sang some beautiful duets with Carlson — and had quite a bit of fun pointing out that she’s a bit taller than he is, prompting Andrews to quip that he now understood how Sonny Bono felt next to Cher.

Humor, in fact, was a regular part of the show, from two of his band members forming the shape of letters to Andrews closing the first act by lying on the floor, announcing that he might do the rest of the show like that since it felt good for his back. The audience was loving every minute of it.

Although Andrews was the headliner, he generously put the spotlight on not just Carlson, who had some great solo songs — her rendition of the Tina Turner version of “Proud Mary” really lit up the stage — but also to his band, giving them the opportunity to demonstrate they could do their own appealing solo numbers, including the American Bandstand theme song and a gorgeous rendition of the timeless “Maria” from West Side Story.

Great fun, and it’s no surprise that Andrews would end the show with a rousing standing ovation from the audience.

What’s Coming Up Next for the Cabaret Series?

The Orlando Shakes’ Courtyard Cabaret Series continues into next year, and upcoming shows include: