Orlando Exhibit on the Pulse Massacre Shows a Community Coming Together 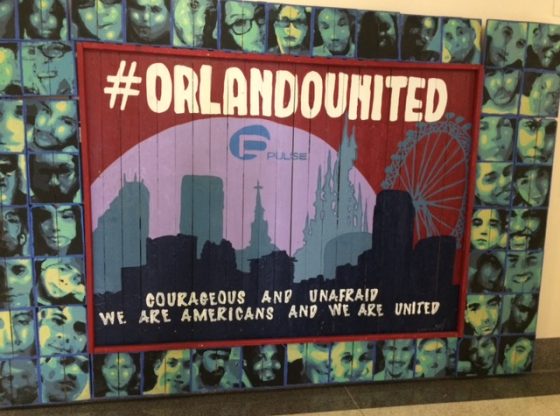 ORLANDO – It’s no exaggeration to say that at 2 a.m. on June 12, 2016, the city of Orlando experienced a devastating trauma like never before when 49 people were murdered by a lone gunman at Pulse, a gays nightclub, and 68 others were seriously injured.

But it would be a mistake to suggest the story stops there, and the only thing to come out of that tragedy is the appalling images of the innocent lives taken by domestic terrorist Omar Mateen, who was himself killed by Orlando police.

In the days after the massacre, city residents came together in remarkable ways, holding rallies to show their support for the victims, their families, and the survivors. Memorials were created to pay tribute to them, and placed around in the city, including at Lake Eola Park and the Dr. Phillip Center for the Arts.

In fact, the outpouring of support was so strong that it came not only from Orlando and other cities in the United States but from around the world. And that did something equally astonishing: it created an enduring legacy.

That legacy is now an exhibit, the One Orlando Collection, being hosted at the Orange County Regional History Center, a museum housed in a historic courthouse in downtown Orlando.

And this exhibit amply demonstrates that the horrors of the 2016 Pulse massacre are just one aspect of this story, and the love and support that followed the shootings is just as significant.

What Is the One Orlando Collection About?

Although the exhibit is on the second floor of the History Center, it actually starts at the staircase in the main lobby with Ribbons Of Love, a collection of ribbons with messages on them that have been placed on the rail of the staircase. Those bright, colorful ribbons lead visitors right up the stairs to the exhibit.

“In the aftermath of the Pulse nightclub shooting, people around the country and around the world came together to honor and remember the victims, leaving messages of hope and support at memorial sites,” the liner notes to Ribbons Of Love state.

The exhibit is a collection of those tributes, which are very diverse, ranging from flowers to candles, straw hats, teddy bears — anything that can serve as a vehicle for a message of love, hope and support.

In fact, this collection holds 5,710 records for memorial items — an impressive show of support for the people who went to Pulse that night expecting to do nothing more than dance and have fun.

“This collection exists to present all aspects of the Pulse nightclub massacre and our community’s response to it,” the exhibit notes.

And, as the liner notes point out, sadly some of the items reflect the ugliness it brought out in some people.

“Good historians know that even hateful, unfortunate, and misguided reactions are part of our story,” the exhibit states.

The exhibition dramatically shows how Pulse has forever altered the ongoing Orlando story.

“The morning of July 12 2016, Orlando changed forever,” the liner notes state at the opening of the exhibit. “For 16 months, the world knew our city as the site of America’s deadliest mass shooting in modern history.”

That was when Mateen, a 29-year-old security guard, went into Pulse — a gay nightclub in the city’s SoDo district that was hosting Latin Night — and shot and killed 49 people in this terrorist attack.

Orlando Police Department officers shot and killed Mateen after a three-hour standoff. It’s the deadliest incident of violence against the gay community in U.S. history.

How Does This Exhibit Honor The Victims?

As the One Orlando Collection points out, there was a lot of healing that followed. One of the exhibit’s most impressive items is a stunning quilt made by quilter and artist Roberta Blick, who passed away at age 90 in December 2017, but not before completing the quilt that pays tribute to the victims, with their photos worked into the fabric.

“They help us remember that each stolen life was bigger and deeper than the few low-resolution Facebook images that appeared on television screens and social media,” the exhibit states.

The exhibit honors the many ways that people reached out to help the victims. There’s a section on the therapy and comfort dogs that were brought in to provide immediate relief at hospital rooms and memorial sites.

Other sections show the contributions that young children made, donating their own toys or crafting handmade items to become a part of the memorial sites in the days after the tragedy.

A piece by Japanese artist Ryo Kikuchi uses images of birds to memorialize the victims.

And the contributions continue today. The exhibit ends with a large whiteboard where people have written messages about the Pulse massacre and how they feel about it more than two years later.

“After two years, how does Pulse make you feel? Take a pen and write your thoughts,” the exhibit asks of visitors.

And so many have done just that.

As the exhibit points out, the activism is certain to continue well into the future, since “The events of June 12, 2016 lit a fire in many hearts — and a thirst for change.”

The One Orlando Collection exhibit is now at the Orange Country Regional History Center at 65 E. Central Boulevard in downtown Orlando. The museum is open from 10 a.m. to 5 p.m.

The History Center is located in a restored 1927 courthouse at Magnolia Avenue and Central Boulevard in the heart of downtown Orlando, and it also hosts touring exhibitions, including “Genome: Unlocking Life’s Codes,” which opens on Oct. 13 .

While the museum doesn’t have a parking lot, there is parking available in the Library Parking Garage at 112 E. Central Blvd. across from the Orlando Public Library.