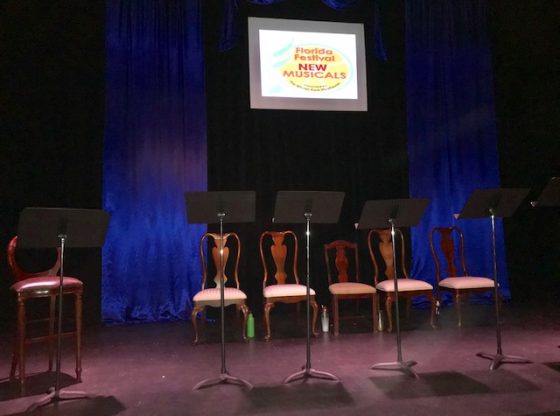 WINTER PARK — If an extremely well acted and staged musical is your idea of first rate entertainment, you might be intrigued at the notion of a musical in progress — or one still being developed by the writers, composers and actors. That’s the concept, of course, behind the Florida Festival of New Musicals, and the idea of introducing audiences to new works still in the early creative stage got a big boost on Friday with the introduction of Flaming Volcano Bed & Breakfast, a production written by Ned Wilkinson that leaves you wishing it were headed for a full production this summer.

Wilkinson’s comedic play is about the owner of a brand new bed & breakfast in Athens, Georgia who finds her world turning upside down thanks to Polly, an intelligence assistant similar to Siri that seems to be taking over not just her property, but so much more — and for seemingly inexplicable reasons. A unique mix of humor, science fiction and even Greek mythology, Flaming Volcano has such a strong first act that it leaves you craving for part two.

What is the Festival Of New Musicals?

The Winter Park Playhouse, Central Florida’s only theater devoted entirely to musicals, has been producing the Florida Festival of New Musicals for the past few years now, and this year moved it up from August to June. It runs this weekend, with five shows today and four on Sunday.

The concept is simple: playwrights and musicians working on original musicals submit their show to the festival, and the ones that get accepted are given a reading of either the first or second act. In the case of Flaming Volcano, it was the first act.

The term “Reading” is in some ways misleading, because this felt like far more than a simple reading of the show. While there are no set designs, Flaming Volcano was directed by Roy Alan, the Playhouse’s artistic director, and uses six first rate actors to bring the show to life. What the audience gets is far more entertaining than what you’d ordinarily expect from a staged reading.

What is Flaming Volcano About?

Wilkinson, who is also a member of the Playhouse’s music team has a lot of fun setting up the premise of Flaming Volcano. Karen (wonderfully performed here by Kelly Wells), is a retiree who has decided to open a bed & breakfast, and two couples win a contest to be the first ones to stay there. She’s hoping things go more smoothly with the help of her brand new artificial intelligence system, Polly, which only activates when she sings to it.

Among the couples who arrive, Chris and Tina seem happy to be there as they zoom for the hot tub, while Annie and Dave have been feuding, so Annie wants to leave as quickly as possible. But that gets more difficult when their car mysteriously stops operating — which is odd, since it was running just fine earlier in the day. But then the play takes an unexpected turn into left field, and … well, I won’t spoil the fun. Let’s just say a key word here is the town they’re staying in: Athens.

Initially, it seems like the play will be a clever and humorous story about what it’s like to run a bed & breakfast and to deal with quirk guests. It’s only when Polly takes a much larger role in the story that it shifts into a very interesting — and delightfully quirky — direction.

Wilkinson has a gift for creating sharp lines for his characters, and the performers — Courtney Cunningham and Dustin Cunningham as Tina and Chris, Monica Titus and Michael Scott Ross as Annie and Dave, and Leigh Green as Polly — are marvelous throughout the entire production. There’s no question that most of the audience, myself included, were ready for act 2 when the lights came up.

Where Can You See This Festival?

The Florida Festival of New Musicals is being performed at the musical theater at 711 Orange Ave., Suite C in Winter Park. Call 407-645-0145 for details and more information.

Today’s schedule of shows is: