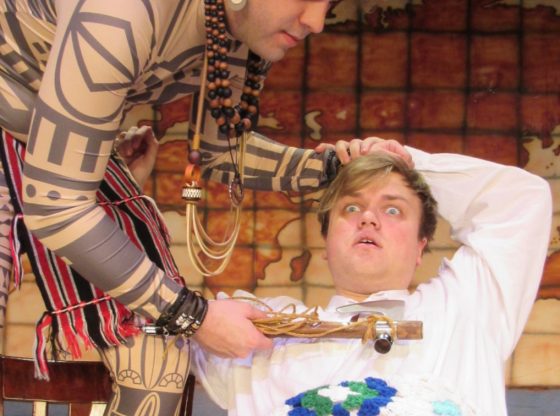 ORLANDO — Comedians and comedy writers find laughs in a lot of different places, from the world of politics to what celebrities are up to, and even their own personal foibles.

Playwright Thom Talbott found inspiration not in current events, but in classic literature. In fact, it was the line “It is better to lie with a sober cannibal then a drunk Christian” that proved truly inspirational to him.

That line was from Herman Meville’s classic book Moby Dick, which Talbott said became “comedy gold” in his eyes.

The result was The Erroneous Moby Dick, Talbott’s comedic spin on the book, a play that uses four actors to bring an assortment of the book’s characters to life as, not surprisingly, some truly madcap characters.

What Is Erroneous Moby Dick All About?

As Talbott noted, the play follows the main avenues of humor that he discovered in Meville’s original.

“Call him Ishmael, but he just wants to be a whaler and he has arrived in New Bedford to find a ship,” he noted. “There he meets his mysterious bed mate, Queequeg; the hysterical owner of the Spouter Inn, Mrs. Coffin; the ever dependable, first mate, Mr. Starbuck along with his long suffering wife, Mary; the peculiar wharf rat, Elijah; and finally, the obsessive, overwrought, and on-edge Captain Ahab. Sign on to the whaler, Pequod, for a voyage on the high seas of hilarity and a Moby Dick that you haven’t seen before.”

The cast includes Dean Coburn, Austin Creswell, Ethan Gaston, and Talbott himself, and The Erroneous Mody Dick is making its world premiere next month at the Orlando International Fringe Theatre Festival.

Freeline Media reached out to Thom to learn more about his new comedy.

How Did Thom Talbott Create This Show?

Freeline Media: It’s common at Fringe to build comedic shows around popular books and movies — but dude, Moby Dick is really, truly old! Why a Classic Lit novel from yestercentury?

Thom Talbott: I teach drama at a community college and was looking for a fun spin on a classic novel and I quite literally had a dream about Moby Dick. Now, I read the novel back in 10th grade and hated it except for the last 30 or so pages where — spoiler alert — everyone dies. But after that very vivid dream of a stage version of Moby Dick, I started reading up on it and I read the line “It is better to lie with a sober cannibal then a drunk christian.” After I stopped laughing I started reading a lot about how Moby Dick is never really known for being funny, but it is a laugh riot. I reread the novel in a weekend and I was on my way to creating The Erroneous Moby Dick.

This did not originally start as a Fringe show. It was merely meant as a production for my season, but I had always wanted to take a group of students to a Fringe. This just turned into the perfect vehicle to do so.

FM: Are you a longtime fan of the book, and did you intend this as a loving tribute?

Thom: It is most definitely a loving tribute. About 75% of text that is in the play comes straight from Melville’s novel. I truly fell in love with the characters of Ishmael and Queequeg and their bromance. They really are such a great comedy team.

FM: Moby Dick is often viewed as a novel about obsession, and how it drives people to extreme behavior. How easy and/or difficult is it to spoof obsessions?

Thom: I think that obsessions are the easiest thing to spoof, but it’s when you look at the heart of the characters that you get to the core of Moby Dick. In our story Captain Ahab is the villain and Ishmael is the hero.

FM: You’re going to be performing this at the Savoy Orlando, very close to the Orlando Shakes. What do you like about staging your production there?

Thom: I am just happy to get the opportunity to bring my little erroneous world to Fringe. Savoy Orlando is providing that and it also has the benefit of surviving adult libations in air conditioned comfort.

FM: Finally, tell us a little more about yourself and how you got involved in theater.

Thom: I’ve been directing and writing for the last 30 years. I have directed easily over 150 shows. At a very early age, I became enthralled with the smell of grease paint  — I’m dating myself — and I knew that I wanted a life in theater and I’ve been living the dream ever since. Taking a step into the erroneous universe is just another adventure.

The Erroneous Moby Dick is being performed in the Starlite Room at Savoy Orlando, 1913 N. Orange Ave. in Ivanhoe Village on the following dates:

To learn more about the show, visit Erroneous Moby Dick